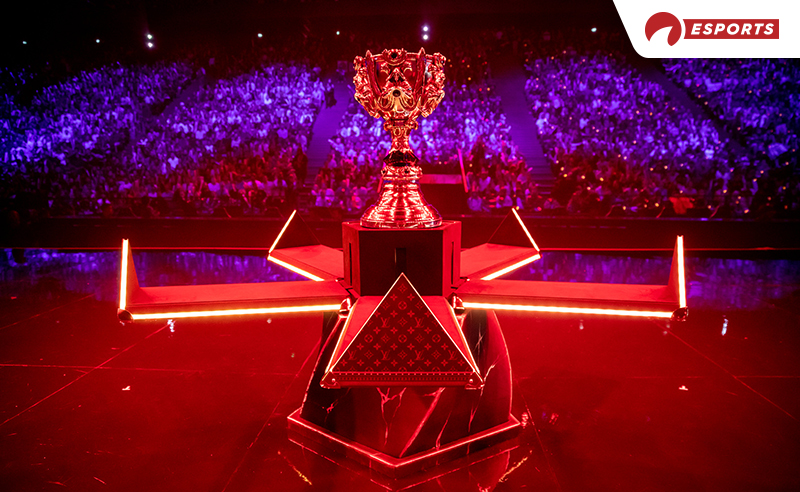 Teams from all corners of the globe are testing their mettle against the best of the best at the League of Legends World Championship. Twenty-two teams descended upon Shanghai, China, looking to prove that they are the cream of the crop in 2020.

And, of course, with Worlds being the single biggest esports event of 2020, there are plenty of wagering offers for esports bettors.

Odds as of October 11 at Bovada

After a long run of Korean dominance, the Chinese League of Legends scene has asserted itself as the best in the world. Teams from the LPL have won each of the past two world championship tournaments, both off the back of dominant 3-0 victories in the grand finals.

The top two Chinese teams for 2020 appear to be Top Esports and JD Gaming. The two teams finished the LPL Summer Split regular season at 13-3 with both possessing a +17 map differential.

Top Esports is absolutely stacked with talent with some of the biggest names to ever play the game competing on the roster. Midlaner Zhuo “knight” Ding won the LPL Summer Split MVP award after pacing the league in kills per game and KDA for qualifying players while posting a kill participation rate over 75 percent. Joining knight on the LPL First-Team All-Pro squad was ADC Yu “JackeyLove” Wen-Bo.

The only other team in the LPL to have two First-Team All-Pro representatives is JD Gaming. Jungler Seo “Kanavi” Jin-hyeok might be the best jungler in the world and placed in the top two among the position in kills, CS per minute and gold per minute. Zuo “LvMao” Ming-Hao claimed the All-Pro nod for supports. LvMao was one of only three supports to average over 10 assists per game during the summer while playing a total of 12 unique champions, the second-most for his position.

The LPL is more than just these two squads with the likes of Suning and LGD Gaming turning it on. Any of the four teams that qualify for Worlds from China have a real shot to win it all.

From 2013 to 2017, eight of the 10 finalists at the world championship came from Korea. It was a downright dominant stretch that will likely never be matched again. However, in the past two years, only one Korean team has finished in the top four at Worlds and none have made it to the finals.

The great hope for the LCK to rise back to global dominance is DAMWON Gaming. DAMWON finished the LCK Summer Split 15-2, dropping just five maps all summer long. The sheer dominance of DAMWON is hard to overstate but so too is their depth of talent.

There is a real argument to be made that Jang “Nuguri” Ha-gwon, Kim “Canyon” Geon-bu, Heo “ShowMaker” Su and Cho “BeryL” Geon-hee have been the best at their respective positions in the LCK this split. ShowMaker in particular has been popping off with an absurd 15.48 KDA this split, dying just 0.78 times per game.

Of course, there is still DRX and Gen.G, but DAMWON checks all the boxes of Korean best chance to win Worlds.

Can the West Finally Do it?

Technically speaking, a Western team has won the top prize in League of Legends. It was during Season 1 in 2011 that Fnatic took the top spot but that was before China or Korea started competing at Worlds. Since then, North American and European teams have struggled mightily to prove they are on the same tier as their Chinese and Korean counterparts.

However, the gap is closing. Fnatic and G2 made it all the way to the finals the past two years but were manhandled by LPL teams once they got there. It feels like Western teams are starting to get closer but is this the year they finally accomplish the impossible?

When it comes time to playing under the bright lights, G2 Esports might be the best hope. G2 made it to the finals last year only to get steamrolled by FunPlus Phoenix. On paper, G2 has all the skills and a vast wealth of flexibility to take down any opponent but they have not put their best foot forward in the LEC. It seems that the team was not as adept at online play and found themselves middling during the Summer Split. Maybe these struggles will evaporate once they potentially get to Worlds but it is a gamble.

Looking at the LCS and North America, Team SoloMid turned it on in the playoffs and made it through the losers bracket to be the last team standing. With experience all over the roster, including Søren “Bjergsen” Bjerg and Yiliang “Peter” “Doublelift” Peng, TSM will look to finally prove NA is on par with the best in the world.

Maybe FlyQuest can do it after finally getting the C9 monkey off their back. Maybe Team Liquid is peaking at the right time and can ride the momentum. But, if we are being honest, you should not bank on the Worlds 2020 winner coming from North America.

Of the 22 teams invited to Worlds 2020, 12 get an automatic berth into the Main Event while the other 10 go into the Group Stages.

The teams in the Group Stages will be broken into two groups of five. Each member of a group will play the other four members. The top four teams in the group stage will move on to the Main Event.

The Main Event will see the 16 remaining teams split into four groups of four. Once again, all teams within a group will face one another twice, with the top two teams moving on to the knockout round and the bottom two eliminated.

Finally, the knockout round pits the top eight teams against one another in a bracket. Win and you move on, lose and you go home.

Who Will Be Competing At Worlds 2020

All 22 teams have officially booked their tickets to Worlds 2020. The LPL and LEC will send the most representatives with four teams from each region competing. The LCS and LCK will both send three with the remaining regions sending two or one.