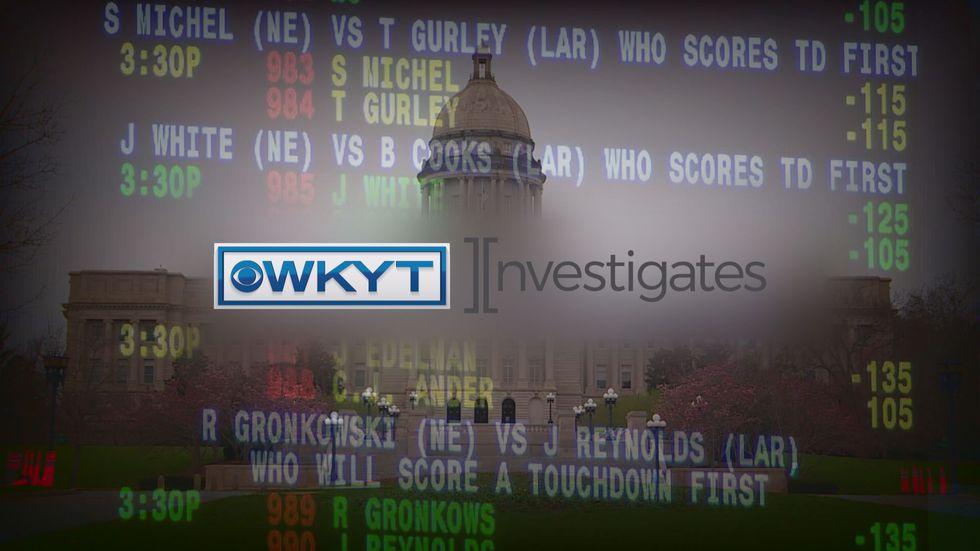 FRANKFORT, Ky. (WKYT) – The Super Bowl is the biggest American sporting event of the year, and not just on the field. The American Gaming Association estimates that more than $4 billion has been wagered on the big game this year.

Only a fraction of that was wagered within the law.

Sports betting is already allowed in close to half the country since the U.S. Supreme Court struck down a federal ban on it back in 2018. But you can’t do it here in Kentucky – at least not legally.

Calls are growing, though, for the commonwealth to cash in on it.

He says an estimated $2 billion is wagered illegally in Kentucky each year. Under HB 241, five percent of the net money the state receives from sports wagering would go to addiction prevention and treatment, with the rest going toward the state’s pension liabilities.

Kentucky could be the last of all its neighbors to legalize sports betting.

Here in the commonwealth, lawmakers project that sports betting could bring in at least $20 million in tax revenue each year.

Gov. Andy Beshear, D-Kentucky, has said that he wants to see sports betting. The Kentucky Chamber of Commerce lists it in its legislative priorities to restart Kentucky. And a bipartisan group of co-sponsors has signed onto Rep. Koenig’s bill.

But despite the growing momentum, some resistance remains inside and outside the halls of the state capitol in Frankfort.

The Family Foundation – among those leading the charge against historical horse racing – also opposes sports betting. Executive Director Kent Ostrander says all the talk of dollars and cents often leaves out the toll that gambling can take on families.

“We don’t want families to be predatorily used in a gambling scheme of any kind,” Ostrander said. “When you have a pool in your backyard and you don’t bother to put a fence around it, you can be liable if the neighbor’s children come over and get hurt in that pool. Because it’s an attractive but dangerous nuisance. Gambling is the same thing.

“You can win all kinds of money, but you can also lose a whole lot,” he said, “and rarely is that mentioned as you enter the game.”

Two million American adults (one percent of the population) meet criteria for severe gambling problems in a given year, according to estimates from the National Council on Problem Gambling. Another four to six million could be considered to have “mild” or “moderate” gambling problems, the NCPG says.

Ostrander says he believes the real numbers could be even higher.

“Tell me the one limitation there is on gambling,” Ostrander said. “There are none. The gambling institution can take you for every penny and just smile, pat you on the back and tell you, ‘We’ve got a 12-step program for you.’”

Ostrander also questions how much financial good it would actually do for the state.

‘It’s part of the culture’

Yet observers say a growing appetite for sports betting exists in Kentucky – especially with the state’s strong attachment to college athletics.

And sports wagering is becoming more mainstream as it becomes more ingrained in sports itself: Over/unders, point spreads and money lines are becoming as common on scoreboards and in sports apps as dates, times and TV channels.

Sports gambling has been a recurring topic on KSR lately as Jones tries to tally where lawmakers stand on the issue compared to their stances on historical horse racing.

Will go back to going for more responses tomorrow….. pic.twitter.com/UMcXbV9kzf

Jones said he thinks 60 to 70 percent of Kentuckians would support sports betting if it were put on the ballot.

“It is not a controversy,” he said. “And a lot of the ones that would vote no are out there buying lottery tickets and telling themselves it’s not gambling. I’m here to tell you, that’s gambling, too, it’s just gambling you cannot win.”

What are the odds?

Many, like Jones, say they believe it is a matter of “when,” not “if,” sports betting is legalized in Kentucky.

Coming into this year, a number of industry publications expected Kentucky to be one of the next states to pass sports betting.

Those prospects, however, have cooled a bit for several reasons, including a focus on historical horse racing after the Kentucky Supreme Court ruled in September that some of the machines used across the state are not legal.

(Historical horse racing handle was more than $2 billion in Fiscal Year 2020, bringing in $33.8 million in taxes, according to pari-mutuel excise tax records from the Kentucky Horse Racing Commission.)

Lawmakers also have to pass a budget during the 30-day short session. As of Super Bowl Sunday, just 19 legislative days remain in the General Assembly’s 2021 regular session.

Rep. Koenig said he is unsure of his bill’s chances of passing this session, but said the odds were likely as good as they were in the previous session, when his proposal failed despite having what was believed to be majority support in both chambers.