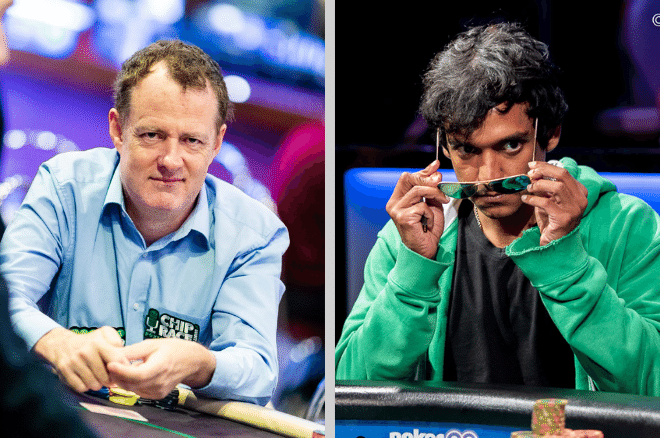 Poker players love to set traps. Some have made ‘trappy’ a big part of their game style and image. No doubt there is immense satisfaction when an aggressive player takes the bait but it’s fair to say that it should only form a small part of a good overall strategy. Players who always try to trap are easy to play against. So are those who never trap. Like most things in poker, balance is the key. It’s also important to navigate cautiously when a trap doesn’t go exactly to plan.

In 2017, Irish poker legend Dara O’Kearney made the final table of the Killarney Highroller where he met his old nemesis Upeshka ‘Pesh’ De Silva – the man who had defeated him heads-up for a WSOP bracelet in 2015.

The two would eventually get heads-up once again but before that, during 3-handed play, Dara attempted to ensnare his old foe with ‘a low-frequency play’.

Adam Daniel limps the button and Dara looks down at pocket Aces. While raising is the more standard line (and the one favoured by the solver 94% of the time), Dara elects to flat. The wily Pesh in the big blind is more aggressive than most so Dara figures this deceptive line could win him a big pot. No such luck for Dara as Pesh checks behind. Still, his hand is now well disguised, a factor that could still win him chips on later streets.

. The action checks around.

The turn comes the

and Dara decides that that’s enough playing possum. He leads out 50K into a pot of 120K. Both players call.

The river comes the

. Both checking and betting seem like decent options but ultimately Dara leans in favour of a bet, feeling like a check might expose him too often to a negative freeroll. He also feels like his range is protected. Yes, he has a well-disguised over-pair but his limp pre-flop also means that his range is so wide that he is uncapped on this middly-paired final board.

Dara fires out 150K into 270K feeling like he can target

and maybe even some sticky

Pesh shoves for 1.49M chips, Adam Daniel folds and Dara is put in a miserable spot. He set a trap which now looks to have back-fired.

Watch the latest animated strategy video from ‘The Chip Race’ crew to find out not just what Dara did but why he did what he did on every street.

Follow @daraokearney, @dklappin and @thechiprace on Twitter and, if you want more from two of the game’s best and most prolific content creators, be sure to check out their spin-off web show ‘The Lock-In’. It features one guest and has a looser format with lots of banter, anecdotes and deep dives into what’s going on in the poker world. Recent guests include Ian Simpson, Neil Channing, Brian Paris and Matt Berkey and their guest on the next show will be UK breakout star Jack Hardcastle.