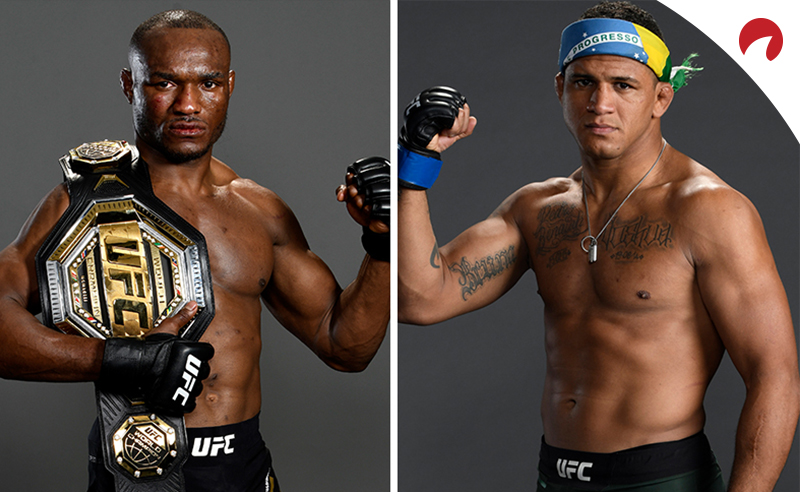 Kamaru “The Nigerian Nightmare” Usman and Gilbert “Durinho” Burns were set to headline UFC 251 on July 11, but Burns tested positive for COVID-19. The fight was postponed for over seven month but now the two have a date at UFC 258 on February 13.

Online sportsbook Bovada released odds for this welterweight championship fight with the champion, Usman, listed as the -250 favorite and the challenger, Burns, coming back as a +195 underdog.

New to the fight game and betting on scraps? Be sure to check out our UFC betting guide to assist you in placing your first wager on the fights. Also, go to our UFC odds page for the latest up-to-date betting lines.

Odds as of January 24 at Bovada

Seeing minus odds next to the champion’s name is nothing new since he has closed as the betting favorite in 10 of his 11 UFC bouts. The only time that Usman has been the underdog was at UFC 235 last March when he fought Tyron Woodley for the title – a fight that he dominated bell to bell. That said, the -200 line is the lowest outside of his Woodley fight, matching the -200 line he had when he fought Warlley Alves in 2016.

Burns Has an Underdog Mentality

While Usman is used to being the betting favorite in a fight, Burns being an underdog isn’t out of the ordinary either. Durinho has been the dog, albeit only slightly, in half of his four bouts since making the jump from lightweight to welterweight in August of last year. He cashed in all four of those welterweight fights, including most recently when he was a +150 underdog to former champion Tyron Woodley in late May in a one-sided victory.

The Nigerian Nightmare has really evolved in front of our eyes over his UFC tenure. Originally, he broke into the game as strictly a wrestler, scoring takedown after takedown, landing 17 through his first three fights in the Octagon. Then, we got to see Usman’s work with striking in the gym pay off as he knocked out Sergio Moraes, completely dismantled Woodley and then got a fifth-round knockout on Colby Covington in December.

Burns Has Become a Wild Man

A similar story can be written about Durinho, who was known mostly as a high-level submission artist but has demonstrated more of his striking and power of late. Of his last eight wins, three have been by knockout while only one came via submission, but he also rocked Woodley several times en route to a decision win.

I feel like the biggest adjustment he made was coming out a little more aggressively and throwing caution to the wind somewhat. His striking may not be pristine, but in the pocket when he fires his hooks, he can do a ton of damage and at longer range, his kicks are solid as well.

As good as Burns looked against Woodley, Usman will be much more active and not just a punching bag. Now, that may work in favor of Burns as there will be more opportunities to land heavier shots, but it also could have a negative effect in terms of cardio – fighting off his back foot is a different game. Not sure Usman will look for a takedown as Burns’ BJJ is off the charts but overall on the feet I think his striking is a little tighter and cleaner, which should carry him to victory.