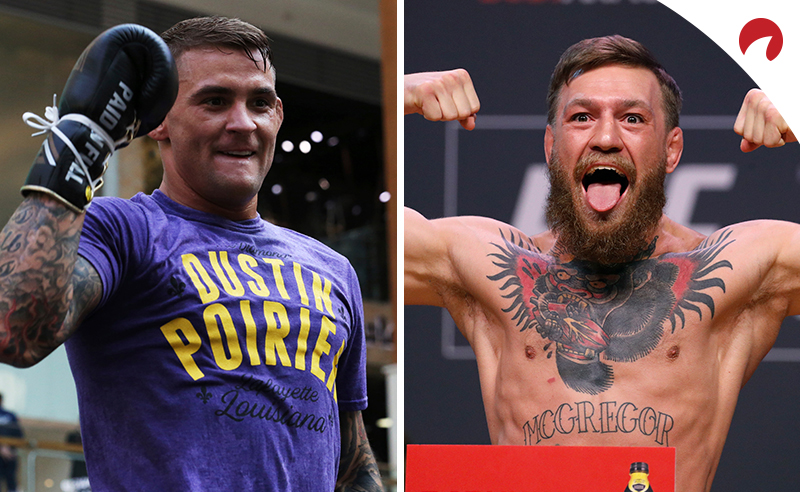 The first UFC pay-per-view in 2021 is a big one: Conor McGregor returns for the first time in over a year to fight Dustin Poirier. In a rematch from over six years ago, the combatants are set to headline UFC 257. The MMA event is also the last of three UFC fight cards in a week at Fight Island, in Abu Dhabi of the United Arab Emirates.

It should come as no surprise to see McGregor as the betting favorite over Poirier when looking at the UFC 257 odds. So, let’s get to the UFC 257: Poirier vs McGregor 2 betting preview, expert picks, and odds for each fight on the main card.

Not only does UFC 257 mark the return of Conor “The Notorious” McGregor to the Octagon, but also his return to the lightweight division where he held the title five years ago and competed with Khabib Nurmagomedov in October 2018. A win over Poirier may set up a rematch with Nurmagomedov, or at least that’s what UFC president Dana White is hoping for.

Over the past three years, only one man has been able to beat Dustin Poirier and that was Nurmagomedov in September 2019. However, if you look way back to September 2014, Poirier was stopped in the first round by McGregor in the featherweight division. Will things be different this time around? The UFC 257 odds point to McGregor as the betting favorite.

Online sportsbook Bovada has released UFC 257 odds with the former champion, Conor McGregor, as the -280 favorite and Dustin Poirier coming back at +220. This means you would need to bet $280 on McGregor to profit $100 with a win, while a $100 bet on a Poirier victory would net you $220 of profit.

New to betting on the fights? Check out our UFC betting guide to help you get in the action. Also, be sure to keep an eye on our UFC odds page for the latest up-to-date betting lines.

It is crazy to think about it but with his inactivity in the Octagon, McGregor (-280) will be searching for his first lightweight victory since November 2016 when he won the lightweight strap. Meanwhile, Poirier (+220) has been much more active over that span, fighting eight times since the start of 2017 and posting a record of 6-1-1, with his only loss coming to Khabib Nurmagomedov.

For more on this fight, check out my odds analysis article.

Welcome to the UFC, Michael “Iron” Chandler (+115), who has spent nearly his entire career in Bellator and was a three-time lightweight champion there. Looking to spoil his debut and return to the win column is Dan “The Hangman” Hooker (-145), coming off two tremendous fight of the night performances in 2020.

Two women looking to get back in the win column will be on tap to set up the main events. The favorite in UFC 257 odds, Jessica “Evil” Eye (-110) took a loss in her only appearance in 2020, falling to Cynthia Calvillo in a five-round decision. Similarly, Joanne “JoJo” Calderwood (-120) lost her 2020 fight by submission to Jennifer Maia, who went on to fight for a title in her next fight.

Looking to remain undefeated in the UFC and run her winning streak to six fights in a row is Amanda Ribas (-325). On the flip side in UFC 257 betting odds, Marina Rodriguez (+250) is searching for her first triumph since August 2019, taking a loss and a majority draw in her last two fights.