If you had NASCAR announcing a dirt race for the Cup Series at Bristol Motor Speedway on your 2020 BINGO card, come collect your prize, and take the rest of us to Las Vegas once the pandemic is over.

The most radical addition to the Cup Series schedule is also its most puzzling.

On one hand, the confirmation generated a great deal of hype and intrigue. There hasn’t been a dirt race at the highest level of the discipline since Sept. 30, 1970 at the North Carolina State Fairgrounds in Raleigh.

Sure, there have been two ARCA races on the Midwestern dirt miles for decades and a Truck Series race at Eldora Speedway over the past seven years, but Cup is a completely different commitment.

So why Bristol, why dirt, and why now?

Bristol Motor Speedway has a full seating capacity of 162,000 — so even 38,000 of them sold has a way of looking awfully sparse — something that has started to come up with greater frequency over the past decade for the spring race.

FOX Sports has expressed interest in a novelty event of some kind, like a dirt race, and found a willing partner in Bristol — a track that previously covered its concrete surface in clay to host the World of Outlaws in 2000 and 2001.

NASCAR Executive Vice President and Chief Development Officer Steve O’Donnell clearly detailed the reasons to do this when asked about it during a Wednesday video teleconference.

“If you look at where we’ve been from a capacity standpoint for that (spring Bristol) event, the track wanted to look at reinventing,” O’Donnell said. “What could we do for that weekend (and) keep some momentum going for the sport.

“When we talked to our television partners about that, that was the number one thing they wanted to see if we could make happen, so we all got together, worked with the race teams and said: let’s give this a try.”

While the casual audience seems fascinated by the prospects of a dirt race at Bristol, a popular sentiment amongst traditional fans is that NASCAR should have simply pursued a date with a real track like Eldora or Knoxville, and not sacrificed one of the four existing races on a paved half-mile in the name of an experiment.

But again, Bristol Motor Speedway officials wanted to inject a sense of novelty and energy into their spring date, while making the annual autumn Night Race a more exclusive experience in 2021.

Each date is currently held by some combination of NASCAR, Speedway Motorsports Inc., Dover Motorsports, Mattco Inc. or the Indianapolis Motor Speedway. These dates are fiscally valuable because they generate revenue from the Cup Series TV contract each season.

For a new venue to appear, that track will either need to be leased out, outright sold or for its owners to somehow obtain a date from the track owners above.

NASCAR has entered into a lease agreement for Road America next season and SMI has done the same with Circuit of the Americas.

The dirt decision was also the result of “fan feedback” according to Bristol Motor Speedway EVP and General Manager Jerry Caldwell, who says the topic has routinely come up over the past two decades since the departure of the World of Outlaws event.

“They said they want a dirt-track race at Bristol and another college football game,” said Caldwell.

An average of over 85,000 attended the World of Outlaws events, and Bristol Motor Speedway hopes the uniqueness could generate a similar spark for NASCAR.

It’s one thing for NASCAR to announce a dirt race at Bristol, but it’s going to be another to tie together what that looks like in terms of the format and competition package.

“Our next step, what we’ve told the teams is let’s sit down together, let’s talk about what we believe would be the best format to add the most excitement, still showcase every one of our race teams,” O’Donnell said. “How do we do that in an exciting fashion?”

The current Cup Series ownership model permits all 36 charter holders a guaranteed starting spot into every race. However, dirt racing is fundamentally about shorter heat races with the consequence of eliminations that build to a shorter main event. 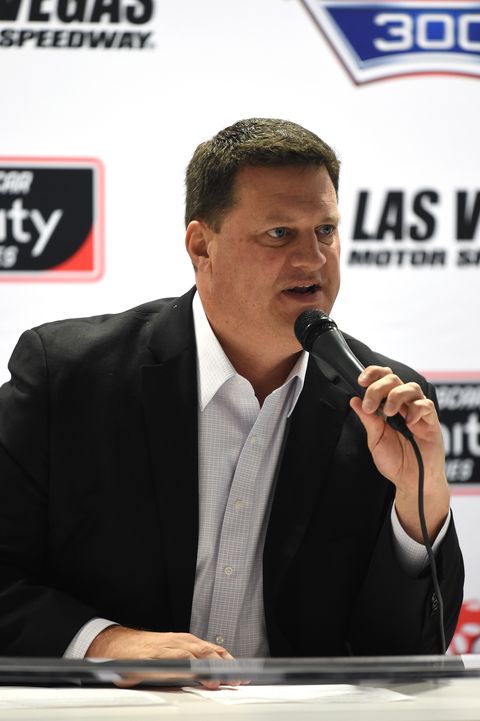 How to merge that ideology with the charter format will be just one element that O’Donnell will have to navigate.

“We’ll get everybody in the room, beat it up like we did with the stages,” O’Donnell said. “Hopefully, (we’ll) come out with something that our fans are really happy with, is easy to understand, and especially dirt fans as well, kind of mirroring what they’re used to seeing also.”

Cup Series veteran Brad Keselowski previously owned a Truck Series team and says the tire package that Goodyear has brought to Eldora isn’t going to cut it for Bristol.

“Yeah, the tire is the big question: If they’re going to bring a tire like they brought to the truck races, I would be very disappointed,” Keselowski said. “If they bring a very high caliber quality dirt tire, I think it could be an amazing race.”

That doesn’t even factor in that Cup cars are much heavier than Super Late Models, and a fear that the racing will just look sluggish in comparison to the status quo.

“The tough part,” says 2003 champion Kurt Busch, “is going to be 40 race cars that are big and heavy; how much are we going to change that track’s conditions? Think of big, heavy cars cooking that clay and it’s going to be dry and slick in a hurry.

“I don’t know how many laps we’re going to run or how the format will be set-up, but the cars are going to look like they’re in slow motion is my biggest fear. But overall, the fun factor is going to be through the roof.”

NASCAR Xfinity Series championship leader Chase Briscoe won the 2018 Truck Series race at Eldora — a dirt track he feels is best suited for NASCAR style racing — and isn’t sure what to expect at Bristol either.

“I think Eldora, truthfully, is probably the perfect racetrack for non-purposely built dirt cars to go run just from the banking standpoint, how it rakes in the dirt,” Briscoe said. “Everything is just really good for that.

“But Eldora would probably have a hard time hosting a Cup race from a logistical side of things — seating obviously.”

“You couldn’t put that many people in it,” Briscoe said. “So, from that standpoint I think Bristol is a phenomenal place to do it, and from a racetrack standpoint I think there is going to be some challenges just from a banking side of things.

“I’m not sure how it’s going to race with our cars with that much banking.”

Briscoe was adamant that Tony Stewart needs to be involved with the track preparation at Bristol due to his work at creating the best possible racing surface at Eldora — a facility he owns.

“If the track is prepped well, it puts on incredible racing and that’s the biggest component of all of this,” Briscoe said. “The dirt is obviously a key ingredient to that, so I’m curious to see what they do for dirt.

“I think the tricky thing is when you talk about the track prep side of things (is) you can’t have a really tacky racetrack with a lot of grip and moisture because we have windshields and you can’t see once too much dirt gets on there.

“So, it’s a really fine line of how you make the racetrack good where it doesn’t affect our cars from overheating and all these things where you can’t see.”

Briscoe’s ultimate suggestion, if hosting NASCAR dirt races at current facilities becomes a trend, is New Hampshire Motor Speedway — a track he believes would race like ARCA’s two events at the Springfield and DuQuoin.

“It’s got a little bit of bank,” Briscoe said. “It would be just like the miles that the ARCA cars run, and I just think it would be a really cool event. You could have the big block Modifieds come and run a big race or whatever.

“So, I think down the road if Bristol is a good success that Loudon would be a really good one to add that to, but I’m excited to add dirt racing. I think the fans are going be excited and I’m excited to see how it turns out.”

What do you say? Make your voice heard, to us and other passionate racing fans. Sign up below to leave comments, argue a point, agree with other posters or register your vehement dissent. It’s all good and we want to hear it.

This content is created and maintained by a third party, and imported onto this page to help users provide their email addresses. You may be able to find more information about this and similar content at piano.io