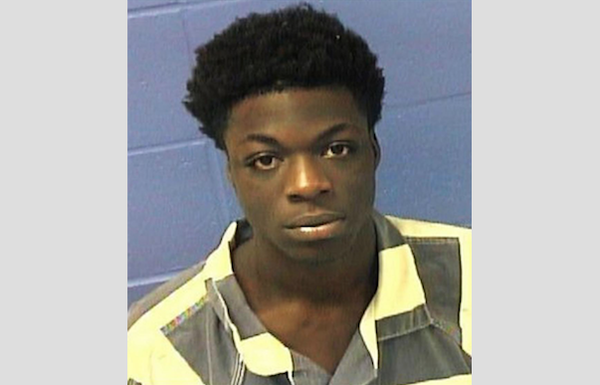 CONWAY — A Pine Bluff man told jurors Wednesday that he choked and beat a Wooster woman to death after she refused his demands to hand over her vehicle at a Conway shopping center in 2018.

Closing arguments in the death-penalty case against 20-year-old Tacori Mackrell — who is accused of kidnapping and killing 72-year-old Elvia Fragstein — are expected to begin at 9 a.m. today.

Mackrell is charged with capital murder, kidnapping, robbery and theft of property.

Investigators believe Fragstein of Wooster was shopping at the Conway Commons Shopping Center on July 7, 2018, when she was abducted by Mackrell, 18, at the time, and his cousin, Robert Smith II, who was 16 at the time. Smith is to be tried separately next month.

With his hair cropped short and wearing khaki pants, a light blue dress shirt and checkered tie, Mackrell’s deep voice boomed across the courtroom as he calmly and unhesitatingly narrated the day Fragstein was killed.

Throughout his testimony, Mackrell repeatedly used the victim’s name with ease, referring to her as “Mrs. Fragstein” even as prosecutor Carol Crews asked if he could identify the person in a photo of Fragstein’s body lying facedown in a ditch off a rural road where she had been dumped.

Mackrell said he and Smith did not plan the crime.

Mackrell said Smith asked him to tag along as Smith took his mother — also Mackrell’s aunt — to Conway that day to play bingo. The pair became bored while waiting and decided to go to the shopping center to “look around and talk to females.”

Smith and Mackrell were identified on security footage at various stores and the parking lot of the shopping center, but Crews pointed out under cross-examination that the two young men were not seen in any of the numerous videos talking to female shoppers.

Mackrell told jurors that he had laced a marijuana “blunt” with phencyclidine, commonly known as PCP or “angel dust,” before he and Smith went to the shopping center.

They were sitting in the car outside T.J. Maxx when Mackrell said they began talking about a vehicle theft that had occurred the previous day in Pine Bluff.

“We might as well get this one,” Mackrell said he told Smith as he spotted Fragstein exiting the store and going to her vehicle.

Mackrell slid into the back seat directly behind Fragstein and demanded that she give him the vehicle, a 2013 silver Honda CR-V.

“Look at the jury and tell them what Mrs. Fragstein said to you when you asked for her car,” Crews later demanded angrily on cross-examination.

Mackrell looked at the jury and said Fragstein told him, “No.”

He had previously testified when questioned by defense attorney William “Bill” James Jr. that he “acted off impulse.”

Mackrell said he “hit her with my fist on the head,” then grabbed her in a chokehold and continued to punch her in the face. She struggled for a “split second” as he dragged her to the back seat, he said.

“I felt her go limp in my arms,” Mackrell said. “I didn’t know what that meant.”

Fragstein’s hands and feet were bound with the men’s belts and she was pushed down into the back floorboard.

With her still unconscious, Mackrell said, he drove her Honda CR-V to the bingo hall to deliver his aunt’s car to her. The two then stopped at a gas station to fill the stolen vehicle with fuel.

Mackrell said he realized, “I just messed up very badly.”

He then repeatedly punched Fragstein in the stomach as she was bound on the back floorboard.

In an interview with investigators after he and Smith were arrested in 2018, Mackrell had told detectives that he had heard Fragstein moan for the last time near “the big rocks” off Interstate 530 in Little Rock on the way to Pine Bluff. Those rocks are near the Dixon Road exit.

An autopsy revealed that she had suffered eight broken ribs, a fractured cervical vertebra and a crushed throat during a “multifactional, severe and prolonged assault,” Stephen Erickson, the deputy chief medical examiner at the state Crime Laboratory, had previously testified in the trial.

Mackrell said he and Smith, who was driving the vehicle, dumped the body on rural farmland where his father had worked years ago outside Pine Bluff.

He admitted to driving Fragstein’s vehicle around Pine Bluff for several days after the slaying.

Smith and Mackrell were arrested July 16, a day before Fragstein’s vehicle was found destroyed by fire in a grassy area in Jefferson County, more than 80 miles from where Fragstein had last been seen alive.

Mackrell admitted to lying to the police numerous times because he “was very scared at that moment so I was lying to keep from getting in trouble.”

James and Mackrell’s other defense attorney, Jeff Rosenzweig, also called to the stand Melissa Dannacher, a clinical psychologist and forensic evaluator for the State Hospital, and Brian Simpson, a psychiatrist.

The experts separately testified that they diagnosed Mackrell with a conduct disorder that makes it difficult for Mackrell to follow rules.

Rosenzweig referred to Mackrell as a “crack baby” who tested positive for crack cocaine at birth because of his mother’s drug use.

Mackrell was frequently left without supervision as a child because his father was a long-distance truck driver. Mackrell was the youngest of 20 siblings, he said, describing his father as a “hardworking man.”

“I believe he loved me, but he didn’t have feelings towards me,” Mackrell said.

Mackrell testified that he began getting in trouble at school and continued to have legal issues throughout the rest of his childhood, including incarceration in the Division of Youth Services.

“I didn’t have no structure or guidance,” he said.

Both his father and his mother died before Mackrell was 18.