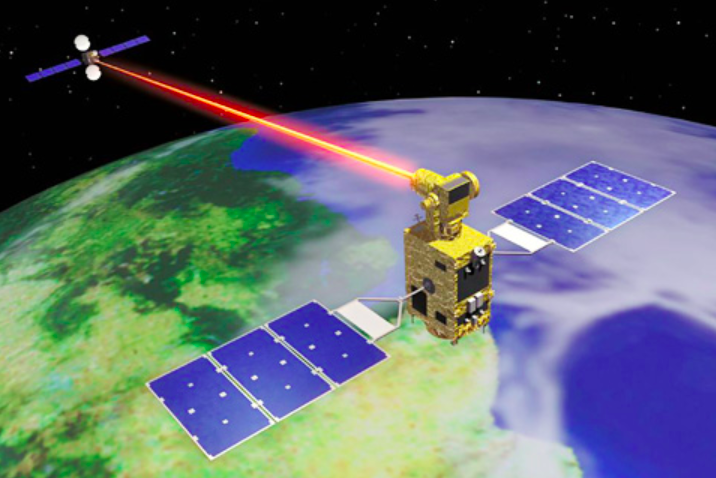 WASHINGTON: As DoD eyes low-cost satellite constellations to provide resilient communications, a crucial bottleneck has emerged: reliable optical data links — both between satellites in space and from space to the ground.

“Think about it, getting a laser beam on a spacecraft to point to a laser receiver on another spacecraft accurately enough with the right power levels, the right waveforms etc.,– it’s not an easy thing,” Nick Bucci, vice president of program development at General Atomics said in an interview. ” And to be able to do that reliably at range is a difficult challenge.”

General Atomics is one of two firms — the other is SA Photonics — prototyping space-based laser communications systems for the Space Development Agency (SDA). The company is building its own Cubesats to carry its Laser Interconnect and Networking Communication System (LINCS) payload, Bucci said.

The SA Photonics payloads were designed as part DARPA’s Blackjack program, and are known collectively as the Mandrake 2 experimental satellites.

“These OISL [Optical Inter-Satellite Links] terminals are early versions of our CrossBeam™ system that is being developed to support DARPA Blackjack and SDA Tranche 0 applications,” Dave Pechner, chief technical officer at SA Photonics said in an email. “The goal of the Mandrake-2 mission is to demonstrate OISL crosslink capabilities as well as space-to-ground links,” he added.

Derek Tournear, SDA director, has stressed that that OISLs are a key enabler for the Transport Layer of the agency’s seven-layered National Defense Space Architecture. The Transport Layer is the planned constellation of Low Earth Orbit (LEO) satellites, intended by former Defense Secretary Mark Esper to serve as the “backbone” SATCOM infrastructure for DoD’s emerging Joint All Domain Command and Control (JADC3) strategy.

Tournear “has highlighted OISLs as one of the top risk areas SDA is looking to address as we move rapidly toward delivery of Tranche 0 and beyond,” an SDA official reiterated. (Tranche 0 is the first wave of SDA demo sats to be launched next year.). “SDA is partnered with DARPA on the Mandrake 2 experiment and with General Atomics on LINCS. These parallel risk reduction efforts enhance SDA’s ability to burn down risk in this area and provide a backup if one of the efforts is delayed or fails for any reason.”

Optical heads that combine low cost, size, weight, and power demands “are an emerging capability, with multiple vendors offering a variety of products,” said a DARPA spokesperson. “DARPA is interested in maturing as many of these offerings as possible to ensure our transition partners have choices for their systems.”

Laser links are key to making LEO communications satellites useful, according to industry experts. The laws of physics mean that satellites in LEO are visible over the horizon, from any given point on the surface, for some 10 minutes max. Keeping in contact requires either too many ground stations to make business sense, or satellites that can to communicate with each other so as to bounce data to a sister satellite that is over a ground station at any one time.

In addition, laser links also are being explored by a number of nations for communicating with satellites, robots and eventually people exploring the Moon and Mars and beyond, because laser wavelengths have the capacity to transmit information at higher data rates than radio waves. That speed in communication is also a boon for communicating from LEO to the ground.

General Atomics touts LINCS on its website as being able to demo “data rates up to 5GB a second at ranges up to 2500 km.”

Bucci explained that there are three key challenges to OISL capability in LEO: payload size; detecting and tracking optical receivers on board satellites; and preventing distortion of the laser beam by the atmosphere when linking to ground stations.

Both DARPA and SDA are counting on being able to do a lot with very small satellites, in order to keep the costs of LEO constellations with hundreds of satellites down. Tournear has said he expects an individual SDA satellite to run in the “tens of millions,” as opposed to the billion-dollar price tags for most large DoD communications satellites.

“One of the obstacles was producing something that could fit into a small package, ” Bucci said. “Getting both a data collector payload on board and a laser communication payload on board, and capable processing for that data collector payload, and communication processing, as well as the attitude and control, the power and control hardware — getting that all on a small package is an extremely difficult job. To get 10 pounds of stuff in a five pound bag, there’s always a challenge, right?”

He explained that ensuring the laser beam can reliably do the acquisition, tracking and pointing between two satellites — separated by thousands of kilometers and moving at the speed of a bullet — also is a tough technical feat. Especially, he added, because the beams themselves are quite narrow.

Finally, getting a laser beam to the ground from a satellite (and vice versa) is a well-know physics problem, and one that DoD has struggled with for years. Bucci said that General Atomics is using an equally well-known solution, adaptive optics, to refocus the beam on its way to a ground station. Indeed, the company has a good deal of experience in developing adaptive optics for a variety of customers, he noted.

Bucci explained that in addition, adaptive optics will enable the satellites to increase the bandwidth of transmissions to the ground — meaning more data can be jetted to the user in that short seven to 10 minute window the satellite is able to link to the ground station.

However, DoD and industry experts note that in the end, optical data links to ground stations likely will never be able to fully outwit Mother Nature, because the moisture in cloud cover will scatter and block visible light. Thus a mix of optical links and infrared ones — which can cut through dense cloud cover — will be de-rigeur for future SATCOM.