Bet £10 on a Premier League Same Game Multi (SGM) for games on Saturday and Sunday and get a free £10 Sportsbook bet to use on any market once settled, T&Cs apply.

Goalscorer: Bruno Fernandes to score anytime @ 15/8
What is going on at Manchester United? Can anyone figure that out… They have been impressive at times this season, but also very frustrating, meaning this is a huge game for their season. While Ole Gunnar Solskjaer has rotated his players a lot of late, I think it’s fair to say that Bruno Fernandes is the first name on the team sheet. The Portuguese international is United’s penalty taker, which is a huge plus in this market, and his average of 0.55 xG/avg match is the most of any United player. I like his chances of adding to his tally in this game at a value price. 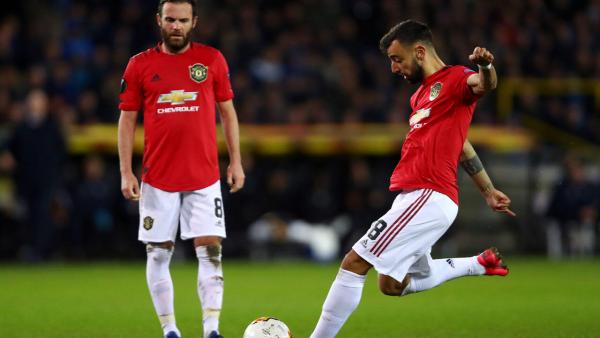 Carded: Fred to be booked @ 11/4
I see this game being a really scrappy midfield battle, which throws up a few candidates for a card. Fred is a player I like in this market, with his awkward style sometimes leading to a ‘T&T’ – touch and tackle. He has averaged 1.8 fouls/avg match this season, picking up 0.6 yellow cards per avg match, so he appeals to me at the prices.

Same Game Multi: Over 1.5 Goals, Over 40 Booking Points and Anthony Martial 1+ shot on target @ 4.67/2
Given the two defences on show here, we should see a few goals at the very least, but the big price in this SGM comes from the over 40 booking points. These two teams are always on the verge of throwing their toys out of the pram in heated games, and I think this could get heated. There has been a huge amount of frustration in both camps of late, so if this game is getting away from one of these sides then expect some rash challenges. Anthony Martial returns here after suspension, and he will surely lead the line that should see him get a shot on target.

Goalscorer: Timo Werner to score first @ 12/5
Chelsea look to be clicking after a slow start, but while their defensive numbers are improving, their attacking process still has room for improvement. They have been gifted four penalties in seven matches in the Premier League, and interestingly, Timo Werner took and scored two penalties in the Champions League in midweek with Jorginho in the team, which is another reason I’m happy to take the German to score first. The other reason is that he is one of the most clinical finishers around, with his xG/avg match of 0.34 will only improve as the season progresses. 12/5 looks big for Chelsea’s main goal threat to open the scoring.

Carded: John Lundstram to be booked @ 7/2
This is another price play, as based on record, Lundstram looks too big at 7/2. He has seen yellow three times already this season, averaging 0.5 bookings per avg match, and if he continues at that rate, then his price will likely crash as the season progresses. His tackle success rate of 33% is poor, and given the speed and trickery in the Chelsea team, he could be caught out.

Same Game Multi: Chelsea to win, Under 3.5 Goals and Timo Werner 1+ shot on target @ 2.57
Chelsea’s defensive improvement means that it is unlikely that Sheffield United will threaten here, but the Blades’ solid back line also means this won’t be a thrashing. The Blues are taken to win a low-scoring game, with Timo Werner to have 1+ shot on target thrown in to boost the price.

Goalscorer: Mohamed Salah to score anytime @ 13/10
In what is the biggest game of the season so far, I like Liverpool’s chances of doing something. Two of their famed front three have started exceptionally well, with Mohamed Salah the pick of the bunch, netting seven times. The Egyptian King is averaging 0.74 xG/avg match, so gets on average a couple of ‘big chances’ per game, and that should be no different at the Etihad. The odds against about Salah hitting the net looks to big in my opinion.

Carded: Rodrigo @ 5/2
Manchester City’s defensive process is improving, and that is to do with the more solid approach taken by Pep Guardiola, deploying more cover for his back four. Rodri is one of the guys whose job it is to protect, and that sometimes leaves him exposed and needing to make a ‘tactical foul’. This is likely to occur once or twice in this match given the fast transitions of Liverpool, so the 5/2 about a Rodri card looks good to me.

Same Game Multi: Liverpool or Draw, Under 4.5 Goals and Mohamed Salah 1+ shot on target @ 2.89/5
As mentioned, I like Liverpool’s chances of avoiding defeat in this game, and am happy to chuck them in the shopping trolley. This is a huge football match, and the defensive improvements made by City should see this game remain tight, with neither team wanting to give an inch, so under 4.5 is added to the trolley. Salah will get a few looks at goal, averaging 4.6 shots/avg match, with the Egyptian averaging 2.0 shots on target/avg match.