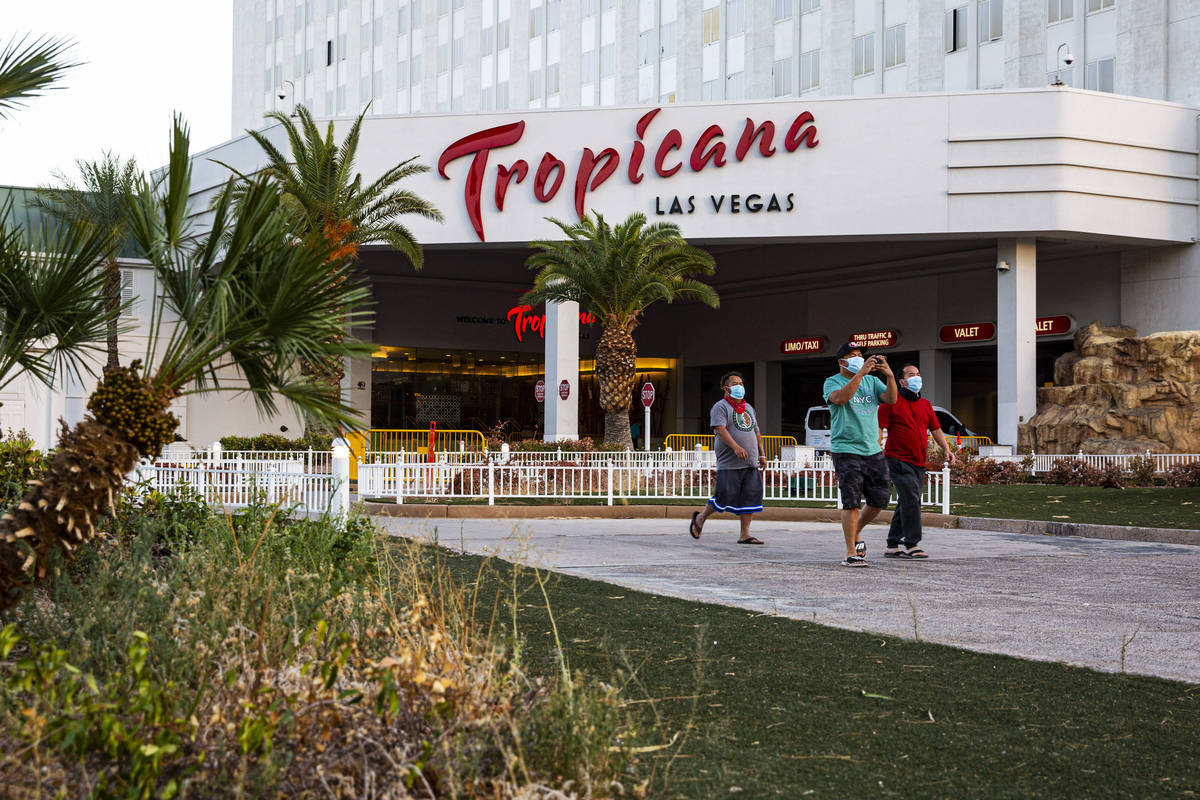 Executives for the company that owns the real estate for the Tropicana say they’ve seen renewed interest from buyers wanting to acquire the Strip property, but they’re going to be choosy about any deal they make.

“There has been a shocking number, to my mind, of people coming out of the woodwork to take a look at us,” said Peter Carlino, chairman and CEO of Gaming and Leisure Properties Inc., the real estate investment trust affiliated with Penn National Gaming Inc.

“A lot of them, I will say, are the dollar-a-week crowd with transactions that wouldn’t interest us at all,” Carlino said. “We’re not intending to take any risk whatsoever. We’re looking for a cash buyer.”

A Las Vegas-based gaming analyst said late Friday that he expects the Tropicana to be sold in 2021.

“While the bid-ask is a little wide for Las Vegas Strip assets today given the current state of visitation, we believe there is no shortage of demand for real estate in and around the Las Vegas Strip given the scarcity value,” John DeCree of Union Gaming said in a note to investors.

The company issued a release announcing earnings for the fourth quarter late Thursday and talked with investors in a conference call early Friday.

Carlino, one of the original founders of Penn National, told investors “2020 was a bizarre year for all of us,” adding that he’s convinced the most profitable center of gaming in the United States isn’t in Las Vegas.

In many respects, the company has had “one of the most successful years we have had since our spin into GLPI,” Carlino said.

“I think part of the good news is that we have proved what we’ve been saying all along, that the real strength of gaming is in the regions, not in Las Vegas,” he said. “Look, I get it. The Wynn is a spectacular property, would love to own it. But I’d rather have, frankly, if we’re interested in return on investment, the kind of properties that we built at Penn and the kind of properties that are in the GLPI portfolio.”

Regarding the potential sale of the Tropicana, which Penn and GLPI have floated since the middle of 2020, company executives are encouraged about the real estate sales environment and last week’s news that Koch Industries has acquired the massive Drew Las Vegas, formerly known as the Fontainebleau.

“A few parties have shown very strong interest so we continue to work on that,” said Steve Ladany, GLPI’s senior vice president and chief development officer. “But I would also add that the Koch transaction that just occurred at the Fontainebleau we view as a very positive signal for our ability to exercise our sales process.”

But, as Carlino noted, the company’s bread and butter is in regional properties, not Las Vegas, and at the beginning of the call he listed several transactions that strengthened the company last year.

“Early in the quarter, we completed the acquisition from Penn National of the land underlying the gaming facility now being constructed in Morgantown, Pennsylvania, in exchange for $30 million in rent credits,” Carlino said. “This land is being leased to Penn National for $3 million of annual cash rent with contractual escalators once the property opens, which is expected in the second half of 2021.”

Carlino also noted an agreement the company reached with a subsidiary of Bally’s Corp. to buy Caesars Entertainment’s position with the Tropicana Evansville in Indiana and a deal with Bally’s for the real estate at Dover Downs Hotel & Casino in Dover, Delaware.

Carlino said that next week, GLPI’s board of directors plans a discussion on reinstituting dividends.