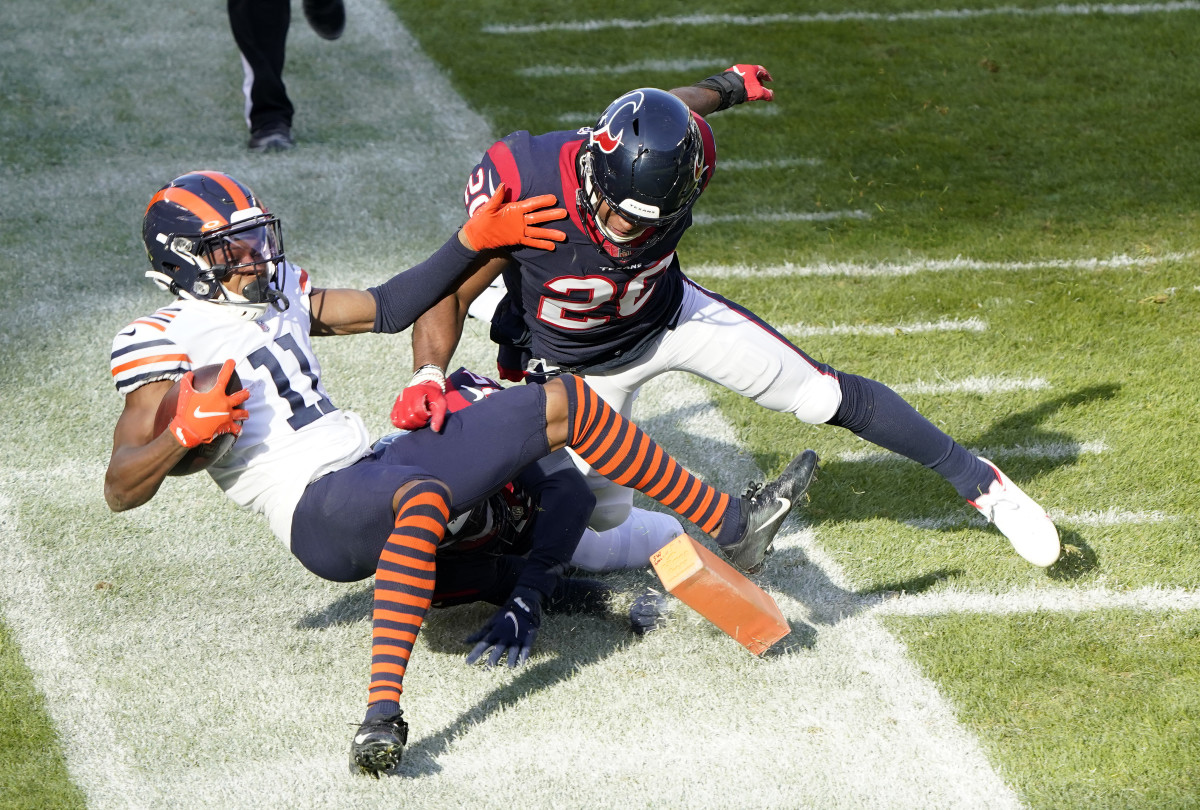 If Allen Robinson leaves the Bears there are plenty of other options in free agency for less cost, and the draft could also provide alternatives at a much lower rate.

There is one option far less expensive than free agency for locating a chief receiving threat, and one which would let the Bears use their draft for other possible need positions.

This is simply by making Darnell Mooney their chief target.

It doesn’t necessarily mean the Bears would plan to switch Mooney to their X-receiver spot in the attack where Robinson plays. He could continue to learn the offense at Z-receiver and possibly move at times to the slot. They would just target him more and count on bigger plays from him.

This would assume a great deal of progress on Mooney’s part and will definitely require better assistance from the Bears quarterback, whoever this person might be.

However, Mooney’s rookie season suggests the real possibility it could occur.

Mooney ran a 4.38-second 40-yard dash in the scouting combine and tied for the third-fastest receiver time. He wasn’t quite at Tyreek Hill’s speed level, but a rung below.

The Bears drafted Mooney with Hill in mind.
Hill plays in the same style of offensive system at the Z-receiver position.

Hill came into the NFL out of Division II West Alabama but Mooney had the benefit of facing much tougher competition at Tulane, not exactly a football powerhouse but still Division I instead of Division II.

Just about every comparison of the rookie seasons by both indicates Mooney could develop into a player similar to Hill. The big difference is Hill has both the speed and elusiveness while Mooney is more of a long strider than Hill.

Mooney has even had a far better influence on his pass-catching abilities as a rookie to draw upon than Hill had with the Chiefs. He had Allen Robinson to show him how to be a pro.

“So I’m getting that mentality of just anywhere, whenever, I want the ball to be in my hands wherever it’s thrown.”

The really big difference here seems to be what lies ahead.

In Hill’s third year, he started catching passes from Patrick Mahomes and his average per catch hasn’t dipped below 14.7 yards since. He made 34 touchdown catches in the past three years.

The Bears need to come up with their own Mahomes, as everyone knows. Someone 25% as good as Mahomes might even be nice.

They may already have their next great receiver, regardless of whether Robinson remains in Chicago or whether he measures up stride for stride with Hill.