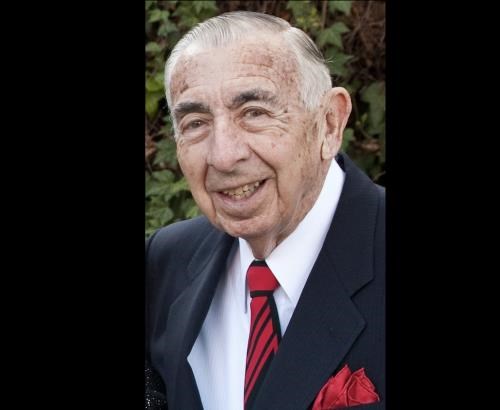 October 28, 1924 – November 1, 2020 Ray Jerry Friedman, born in Detroit, Michigan, passed away peacefully at his home in Beverly Hills surrounded by his loving family. Ray was a devoted husband to his beloved wife Lorraine to whom he was married for 71 years. He was a loving father to his children Mark (Noi), Susan (Barry) Berman, Ellen (Ron) Tinero, Jeff (Gisela) and Judy (Steve) Burkow; and daughter-in-law Karen (Dan) Grandon. He was an extraordinary grandfather to his 13 adoring grandchildren Whitney (Danny), Alex (Kristen), Brandon (Jules), Laura (Lindsey), Andy (Ariel), Johnny (Paula), Arielle (Sam), Jason, Isabel, Eli, Alexa, Matthew and Charlie, and his great grandchildren Tenley, Lincoln and Noa. Ray’s nieces and nephews, Brian, Cary (Kristen), Judy, Joyce (David) and Sheryl (Larry), loved their “Uncle Ray.” Ray was predeceased by his parents Sam and Sadie, sisters Rose Weiss and Leah Freeman, and his brother Abe. Ray moved to Los Angeles in 1945, following a tour of duty in Okinawa, where he was the head of the accounting department of the PX, given that he was “good with numbers.” Following the war, he chose to settle in Los Angeles where his sister Rose and husband Dave lived. In 1948, he met his bride, Lorraine, in Highland Springs and they began their life together. It was a life filled with much love, mutual respect and a shared commitment to family. Lorraine’s legendary poetry writing, and her daily actions, always spoke to her affection for Ray and her appreciation of their love.Ray was a successful CPA who for 65 years built close relationships with many of his clients and became their trusted advisor and friend. His relationship with one client, Steven Gordon, meant the world to him and they became lifelong friends as a result of their work together. Ray was respected for his dedication and loyalty, his strong work ethic, his keen business acumen, and most importantly, for his moral compass, one that always led all who sought his counsel in the right direction.Ray and Lorraine traveled the world together to over 65 countries but their favorite trip of all was the annual family gathering on Memorial Day weekend at their home in Palm Desert with all their children and grandchildren. He and Lorraine beamed with pride and joy seeing the whole family bond during this annual outing. Playing monthly poker and bridge with his friends, Sunday morning tennis games with his buddies, golfing with Lorraine, serving as Treasurer of The Friars Club and President of their local Democratic Club (their nonpartisan Election Night parties were legendary), belonging to several Havurot, going to baseball games with his children in seats that he occupied since the Dodgers moved from Brooklyn, and rooting for UCLA football, Ray always found time to be involved and encourage his children and grandchildren in whatever endeavors they were pursuing. His pride in their accomplishments was evident. But his pride in who they were as individuals was always his focus. Ray leaves a legacy of love. Whenever an essay had to be written about a hero, he was always chosen as the headliner by his grandchildren. A hero without a cape, a humble man who had a twinkle in his eye, a gift of connecting with people and making them feel cared about, and always ready for humorous banter. Leading by example, he taught his children and grandchildren to work hard, to care about what they do and to care about and take care of others, particularly those who were less fortunate. Ray was committed to and supported numerous Jewish and other causes for many decades including Hadassah, The Jewish Home, Temple Emanuel, and Temple Judea, which he and Lorraine helped rebuild. When he heard of a Jewish day school in Vilna, where his parents were from, he became a benefactor and was thrilled to meet some of the appreciative students who came to the US for a student exchange program. Wanting families to be able to be together when visiting the Hadassah University Hospital in Israel, Ray and Lorraine donated a Family Waiting Room. Following the Squirrel Hill synagogue shooting a few years ago, he immediately sent support to the synagogue, as well as his own, to boost their safety plans. Ray was also on the Cedars-Sinai Board of Governors, as is Lorraine, was a generous donor to The Beverly Hills Theatre Guild, of which Lorraine is a longtime Board Member, and was a supporter of the Beverly Gardens Park. A true mensch!With a hole in our hearts, we are at the same time filled with so many wonderful memories. Ray will be missed, but never forgotten. His memory IS a blessing to us all. We want to thank his wonderful team at Cedars-Sinai, Dr. Simon Lo, Dr. Graham Wolff, Dr. Michael Bush, Dr. Ashkan Naraghi, Dr. Sam Ross, Dr. Zev Wiener and cannot adequately express our appreciation to his kind and loving caregivers, Aki and Pet, who provided such heartfelt care and comfort during his final years. A private family memorial was held due to Covid. A gift in Ray’s memory may be made to the charity of your choice.