Here is how I break up the weekly prediction article:

Four-Sures: Top-4 for the week and definite must-starts.
Com-Four-table: Four QBs with relatively safe floors with added upside to be a solid top-12 choice.
Four In the Door: Four QBs who could sneak into the top-12 including the Ballers “Stream of the Week” options and at least one daring dart throw.
Four-Get-About-It: Four QBs I’m fading this week and projecting to finish outside the top 12. Often this includes some higher-profile QBs with tougher matchups that could underperform.

***IMPORTANT NOTE*** This article isn’t about predicting the exact order of finish, but more about identifying which guys have a shot to be among the top-12. There will be QBs from among the 32 teams you don’t see listed here. If you don’t see your guy listed on here, that’s ok. This article is about predicting the top-12 not necessarily who is safest. I’d strongly advise you to follow Andy, Mike, and Jason’s advice for where they have QBs ranked for Week 16.

Patrick Mahomes vs. ATL
The efficiency that this offense runs on is incredible. They rank ranking 1st in yards per play and 2nd in points per drive. Mahomes ranks 1st in 20+ yard passing plays and seems like a lock for 300 yards and three TDs. His dropbacks since bye: 47, 53, 44, 39, & 55. Do realize that Kansas City has played in six straight one-score games… all wins. Last week was the 1st time covering the spread in that span.

Aaron Rodgers vs TEN
Rodgers and the Green Bay offense is a machine right in line with Kansas City. They rank 1st in Points per Drive and 2nd in Yards per Play. Luckily, the Titan defense is weak. They have the Lowest sack and pressure rate in the league and allowing the 4th most pass yards in the NFL. That is a recipe for Rodgers domination.

Kyler Murray vs SF
In the last two weeks, he’s upped his ground game going for 13 & eight rush attempts. That’s what we want for fantasy! The matchup isn’t great but in Week 1 Murray was a top-5 guy against them running for 91 yards and a score. San Francisco also is allowing the 5th highest opponent TD rate through the air so bet on a solid game from a team fighting for a Wild Card spot.

Jalen Hurts @ DAL
Through two games, we’ve seen 29 rushing attempts for 169 rushing yards which are pure gold in DFS. He’s dropped back 108 times in 2.5 games which is more than enough as a passer. Oh, and he plays the Cowboys who have been obliterated by running QBs (Russell QB2 | Kyler QB5 | Lamar QB7) this year. I personally will be starting Hurts against Jason in our “Dino Jr.” league championship league. Hurts is Mike’s Start of the Week. 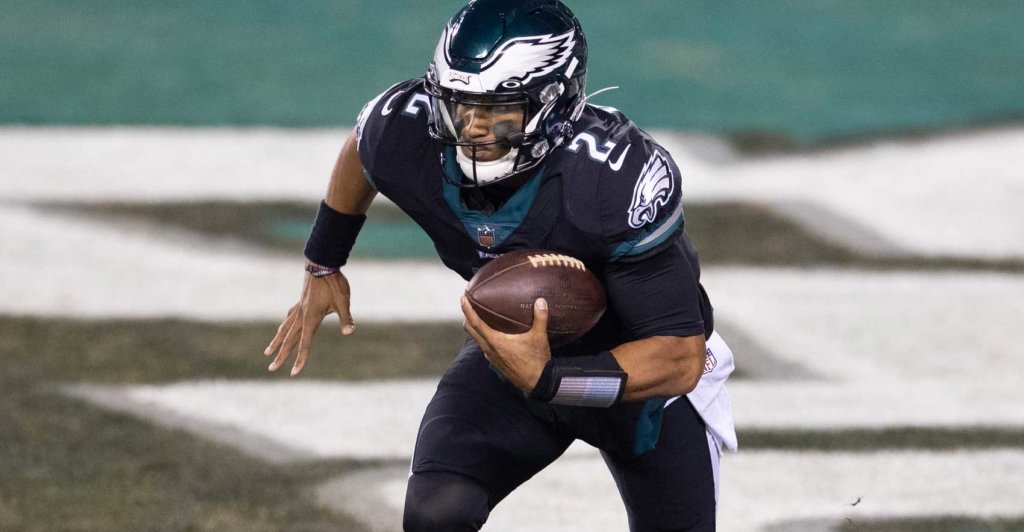 Justin Herbert vs DEN
With two games left, he’s going to break Baker Mayfield‘s record for most passing TDs by a rookie and already has the most 300-yard games (7) in history for a rookie. He went 278/3 versus Denver earlier in Week 8 as the QB4 and this Broncos team was tore up by Josh Allen last week. Herbert seems like a safe bet in the championship week.

Deshaun Watson vs CIN
This is a start your superstars in the championship call. Cincy just shut out Big Ben (but everyone is now) but on the season they’ve allowed the 3rd most 20+ yard pass plays. The Texans can’t run the ball and it’s encouraging to note that David Johnson was uber involved in the passing game last week. Watson always has upside with an extremely high floor. Watson is Jason’s Start of the Week.

Ryan Tannehill @ GB
Tannehill is the QB7 on the season with some monster games this year including five games of 30+ fantasy points. The Titans are as efficient as anyone in the league averaging the 3rd in Points per Drive and 5th in Yards per Play. Titans games have hit the over in 10 of 14 games, the highest rate in the NFL. In order to keep up with the Packers, Tannehill is going to be needed through the air.

Tom Brady @ DET
Detroit is the best matchup for QB in the NFL over the last eight weeks. This game has a 53.5 point over/under and luckily Matthew Stafford has the ability to keep up. Brady is hard to watch sometimes, but he was two players dragged down on the 1-yard line away from being the top QB last week after going 390 & two TDs. He has the 5th most passing yards and Detroit is allowing the highest pass success rate in the league. Brady is Andy’s Start of the Week.

Baker Mayfield @ NYJ
He’s on fire over last month as the QB12, 3, 2, and 12. I wouldn’t mind starting Baker in my championship given the fact… wait for it… he plays the JETS. They’ve allowed the highest expected points per pass attempt in the league and QB1 performances in eight of their last nine weeks.

Mitchell Trubisky @ JAX
I know it sounds gross but realize how good he’s been since being named the starter again coming off the bye. He’s completing 68% of his passes with a healthy six percent TD rate. The Jaguars are allowing the 2nd most fantasy points to the QB position including the 5th most passing yards and one of the worst pressure rates in the league.

Jared Goff @ SEA
In the last five games versus Seattle, he’s completing 69% of his passes & averaging 326 pass yards per game. The Rams also have the highest early-down and 3rd down success rate in the NFL. Seattle is the perfect salve to losing to the Jets(!?!) last week. On the season, their secondary has allowed the 5th most fantasy points per game. 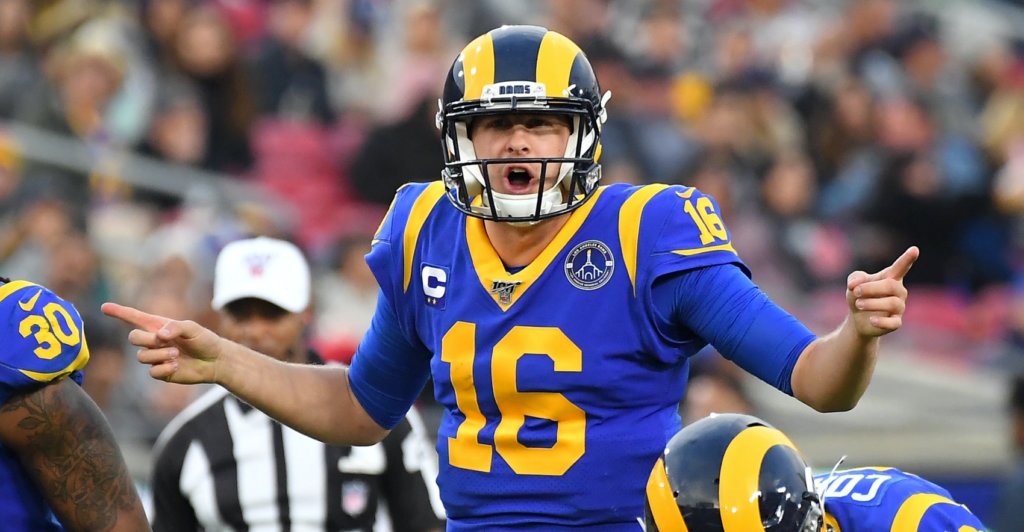 Drew Lock @ LAC
This is an absolute dart throw but Lock has been a top-12 four times on the year. Remember back in Week 8 these Broncos stole a win 31-30 on a last-second TD to K.J. Hamler. He has the highest percentage of 20+ Yard Attempts in the NFL and the Chargers defense is seeing 2nd highest percentage of opponent deep targets. LAC ranks #1 in plays/game and Denver is 8th in pace regularly playing from behind.

Russell Wilson vs LAR
I was down on Wilson last week when he was a top-5 consensus QB and I’m going back there again. He’s been sacked on average four times a game against Sean McVay-led squads and recently teams have figured him out. In games against elite pass rushes, Wilson has underwhelmed against Washington (13.04 pts) last week, the Giants (17.02), the Eagles (14.4), and these Rams (12.92) back in Week 10. No thanks.

Josh Allen @ NE
This was a much-debated topic on the podcast this past week. While Allen is a fringe QB1 option, the upside just isn’t there in championship week. He had his worst game of the year against New England earlier in the year attempting just 18 passes! That won’t get it done my friends.

Lamar Jackson vs. NYG
I’m going to take the plunge with my 3rd high-end QB I’m fading this week. The Giants are quietly one of the better defenses in the league limiting opposing QBs to just 16.8 fantasy points per game, the 4th fewest in the NFL. His floor is always much lower than you think especially when 200 passing yards feels like a struggle to get to. You probably don’t have better options so don’t bench him if you don’t have to.

Cam Newton vs BUF
Newton still has as many passing TDs (5) as passing TDs thrown by “slot WRs” in 2020. I gave that stat for Show 1000… which was two weeks ago. It’s rough out there folks.