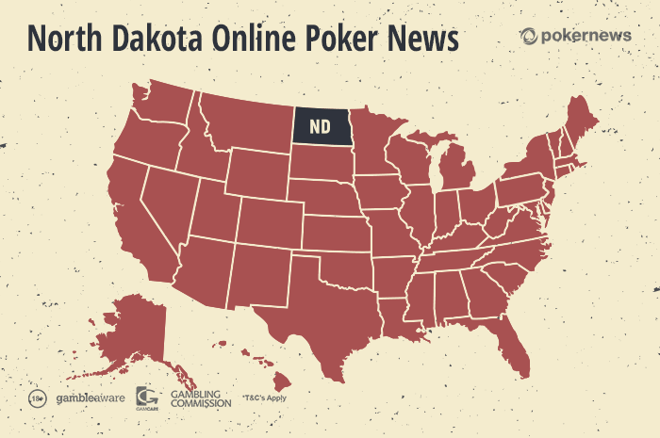 On the heels of Michigan launching online poker, the once placid political waters have begun to churn in two other states in its neighborhood. In the past week, both North Dakota and Illinois have taken small steps closer to bringing online poker to their respective states.

In “The Peace Garden State,” a bill introduced by Rep. Jim Kasper (R) passed the house on Tuesday, while “The Prairie State” saw state representatives Robert Rita and Jonathan Carroll introduce a bill that seeks to fast-track online gaming.

On Tuesday, February 24, the North Dakota House of Representatives passed Rep. Jim Kasper’s House Concurrent Resolution 3012 by a vote of 54-40. The bill, which was first covered by PokerNews here, sought to pose a question – whether or not citizens want online poker – on the November 2022 general election ballot.

In addition, Representatives passed House Concurrent Resolution 3032 by a vote of 70-24. That resolution sought to put the issue of sports betting on the general ballot. Now that both have passed, they’ll make their way to the Senate for another vote. The Senate is on recess until March 3, and Kasper told PokerNews a vote could come as soon as a week or two after that.

Traditionally, North Dakota has been resistant to gaming expansion. For instance, they resisted a state lottery for 12 years prior to approving one in 2002. Similarly, the idea of online poker in North Dakota was first introduced by Rep. Kasper 16 years ago but ultimately failed due to concerns regarding the Wire Act, concerns that are no longer applicable after a recent court ruling.

With politicians have been split on the issue and essentially in a stalemate, lawmakers have decided to let the voters decide.

“There are thousands of people in the state of North Dakota who are playing online poker. It’s not regulated. It’s not taxed. We don’t know for sure if the machines are fair or not because we don’t know anything about it,” Rep. Kasper said during a brief discussion prior to the house vote.

Also passing was House Bill 1389, which provided the framework on how to license online poker in the state if voters do in fact want it. According to that bill, the attorney general would be responsible for licensing and regulation. There would be a paltry $10,000 one-time licensing fee with an annual renewal fee of $5,000.

Here are some other details highlighted in House Bill 1389:

Is Illinois on Fast Track to Online Gaming?

“Representative Bob Rita introduced the bill. I signed on because I’ve heard from several of my constituents on this issue and I agree it is time we do this as a state,” Rep. Carroll told PokerNews. “It will go through committee and hopefully come to the floor for a vote. I think it should get strong support. There’s been a lot of support from constituents and others. I feel very good about this bill.”

Nearly a year ago on March 9, 2020, Illinois took its first legal sports bet, which is currently available in the state in both retail and online formats. The pandemic threw a big wrench in the launch and stymied growth given bettors we required to create an account in person, a requirement waived by Governor J.B. Pritzker on several occasions.

The new bill, which was reported on and analyzed by Dan Katz of pokernewsdaily.com, highlights something most other states do not – speed. While many states take months or even years to go from legislation passing to an actual launch, HB 3142 would require the Illinois Gaming Board to establish regulations within 90 days.

To expedite the process, the bill encourages the governing entity to follow any blueprints already laid out by other states. Also, in the name of expediency, any company that already has a sports betting license and applies for a casino and/or poker license must be granted a one-year temporary license within 30 days.

The bill allows for 13 licenses, one each for the state’s trio of racetracks and 10 brick-and-mortar casinos. Each licensee, which would cost a practical $500,000 with a $250,000 four-year renewal fee, would be allowed to operate three skins. The tax rate established by the bill is 12 percent of adjusted gross gaming revenue.

Finally, the cherry on top of HB 3142 is that the Internet Gaming Act would approve for interstate gaming compacts, meaning the sixth-largest state with a population of more than 12.6 million, could potentially link up with Nevada, New Jersey, and Delaware, which already benefit from such a compact. Michigan is expected to enter such compacts at the end of March, and while Pennsylvania is legally allowed to be a part of interstate gaming compacts, they have yet to dive in.