Each week, we look at a movie or television programme that features poker. This week, it’s a 2007 film called Lucky You. Would you be lucky to watch it? We’ll explain how and why, or why not. 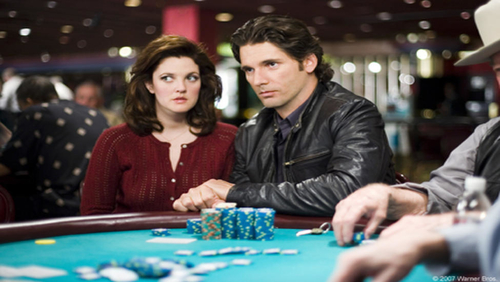 Directed by the man behind L.A. Confidential and 8 Mile, the movie itself was a financial disaster, with a budget of $55m and box office receipt totalling just $8.4m – a loss of $47m but in and of itself, it’s actually a decent poker movie. Eric Bana is a convincing lead character as Huck Cheever, even if he lacks a little of the charisma needed to carry off winning at poker and love at the same time.

The plot centres around Huck’s ability as a poker player and his relationships with aspiring singer Billie – played by Drew Barrymore – and Huck’s father L.C., from whom Huck is at times distant and others best pals. Huck is a bit of a rogue, but you get the feeling that his luck is always going to come out on the right side of the coinflip.

The film’s issue might have come with the romantic interest side of the script, with Drew Barrymore playing Billie Offer, one of the worst names in celluloid history. They might as well have called her Yvonne Buy-One-Get-One-Free. Think of the greatest poker couple relationships that you can think of and you can probably count the legendary romances on the fingers of one finger. This is true of the journey between Huck and Billie, who sound more like a boy and his stray dog best pal rather than a man and a woman. Sadly for Eric and Drew, the chemistry is severely lacking between the pair of them.

Overall, Lucky You came along at the wrong time and in a poker era where it didn’t appeal to enough aspirational dreamers four years on from Moneymaker winning the Main. That is referenced heavily in places but feels like a poker picture that has been superimposed over the blueprint of the movie rather than a justifiable second layer to the overall piece as a whole.

Having flopped at the box office and failed to convince both poker audiences and mainstream movie fans of its charm, Lucky You ran out of luck when it moved its considerable chips over the line in 2007. A full 13 years after its release, perhaps now is the best time to appreciate the film for what it is; a cosy movie to watch on a night in. If you choose to do so, well, lucky you.

Perhaps the best scene in the movie takes place with three left in the Main, and a choice that Huck is clearly agonizing over as much as his Dad.