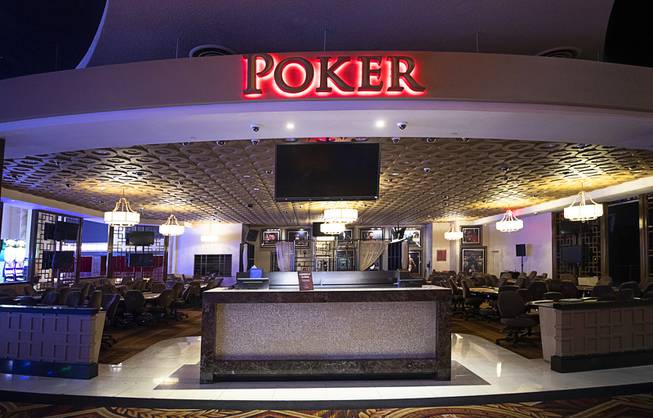 A view of the shuttered poker room during a tour of Caesars Palace Thursday, May 21, 2020, during the coronavirus pandemic.

When casinos reopened in June after the coronavirus shutdown, a number of poker rooms in Las Vegas remained dark, and it seems likely some will never return to action.

The pandemic has wiped out about a third of an already dwindling number of poker tables in Clark County, mostly in Las Vegas.

In January 2020, just before the pandemic hit, 35 casinos in Clark County reported revenue from 418 poker tables, according to the Nevada Gaming Control Board. This January, 21 casinos reported earnings from 282 tables, a drop of about 33%.

The closures are part of a continuing trend only hastened by the pandemic, which has drastically cut into Las Vegas tourism. In the summer of 2010, Las Vegas had over 1,000 poker tables.

The 28-table poker room at the Encore has reopened, but has been temporarily moved to the casino floor at the adjacent Wynn Las Vegas with half the number of tables.

Ryan Beauregard, the director of poker operations, said the company plans to reopen the Encore poker room, but no timetable has been established.

“That 14-table number has worked out well to meet the demand, even on weekends,” Beauregard said. “Demand is slowly starting to creep back up. We’re just now seeing poker play about to outgrow what we’re offering now.”

Beauregard said he expects poker to remain a draw at the Wynn properties on the Strip, but he wondered aloud whether all the closed poker rooms in Las Vegas will eventually reopen.

“Maybe in some places where poker was more of an amenity instead of a draw at a property, that will have to be addressed. But the demand for poker will come back,” Beauregard said.

Poker rooms at Strip casinos like the Mirage — once the center of the poker universe — Mandalay Bay and Excalibur remain closed. All three are MGM Resorts International properties.

At the Excalibur, the rails surrounding the poker area remain in place, but all seven tables have been removed. The room’s popular cash prize wheel for high hands remains perched in a corner.

MGM officials said they had nothing to report about its shuttered rooms. But last year, the MGM Grand hosted a series of free poker tournaments to give away more than $120,000 in promotion money collected from players at those rooms.

At Green Valley Ranch, the poker room’s 22 tables were removed and replaced with chairs so people could watch football and basketball. An official with property owner Station Casinos had no information about when or if the room might reopen.

In August, Station reopened three poker rooms, including at Red Rock Resort, which is operating with 20 eight-seat tables. Players are separated by plastic dividers and must wear masks.

“We’re seeing more and more of our regulars come back,” said Scott Nelson, general manager at Red Rock. “I think the plexiglass shields create confidence for the guests that they can play while remaining safe.”

At the Orleans, poker chips are regularly sprayed down with a heavy-duty sanitizer, and cards are swapped out every couple hours, a Boyd Gaming spokesman said. Whenever a player leaves a game, an attendant wipes down the area.

Cliff Kelley, a regular at the Orleans, said he’s noticed some of the other players have stayed away during the pandemic, but he’s not too concerned.

“Poker will always be popular,” Kelley, 77, of Las Vegas said.. “It’s different now — you have to wear a mask and they’ll be sure to remind you if you take it off — but it’s still poker.”

As he spoke on a recent weeknight, several dozen people were at the tables, some wearing protective face shields and all wearing face masks. In an area adjacent to the poker room, more players were competing in a poker tournament.

“It’s even busier on Fridays, Saturdays and Sundays,” Kelley said.

At the South Point, poker room manager Jason Sanborn said there is still a strong demand for live poker.

“I know there are still restrictions, and I know some rooms have yet to open, but I do think we’re seeing a resurgence,” said Sanborn, who oversees a busy 30-table room.