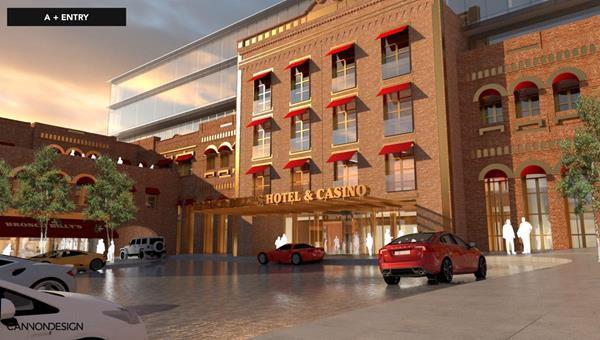 The Chamonix Casino Hotel, scheduled to open late next year, is part of a $180 million expansion project under construction that will nearly double the gaming floor of Bronco Billy’s and add upscale hotel rooms, restaurants, a spa, rooftop pool, convention and meeting space and a parking garage. Full House also said it plans to close Bronco Billy’s for up to four months for renovations after the Chamonix project is completed.

Full House also announced it has agreed to acquire the nearby Carr Manor, a historic, 15-room bed-and-breakfast inn northeast of Bronco Billy’s, to replace 36 hotel rooms that will be wiped out by the Chamonix project. The company also is buying several nearby parcels north of the casino to replace parking lots that will become the site of the new hotel. The transactions total $3.4 million and are scheduled to close early next month.

The new hotel is named for Chaminox-Mount Blanc, the French resort city at the foot of Mount Blanc, Europe’s highest peak, that hosted the first Winter Olympics in 1924 and draws 5 million visitors annually.

“Chamonix will bring the luxury of the French Alps to the Rockies, combining ‘European Elegance with Colorado Comfort,’” Full House CEO Dan Lee said Wednesday in a news release.

Once Chamonix is open and renovations of Bronco Billy’s are complete, Full House will employ between 350 and 400 people, or nearly double Bronco Billy’s 190 employees. The casino has offered to recall employees who were furloughed when Colorado casinos were forced to close in March 2020 by state COVID-19 pandemic-related restrictions. Some employees had found other jobs before they were recalled, Baxter Lee said.

Full House issued $310 million in debt last month to pay for the Chamonix project and refinance other debt. The company expanded the project in January from 180 rooms to 300 rooms and decided build it at once instead of the initially planned two phases. Full House said it expanded and accelerated the project in response to Colorado and Cripple Creek voters in November lifting betting limits and allowing additional table games.


Will more hotels, sports wagering take Cripple Creek to the next level?

Chamonix Casino Hotel would be by far the largest hotel in Cripple Creek, eclipsing the 158-room Double Eagle Hotel and Casino. Chamonix is among several hotel projects coming to Cripple Creek. American Gaming Group is building a $14 million, 102-room hotel adjacent to its Wildwood Casino that is scheduled to open by early May. Triple Crown Casinos plans to start construction on its $40 million, 150-room hotel after Colorado’s pandemic-related restrictions on hotels and restaurants are further eased.

Plans by Century Casinos to convert and expand the historic and long-vacant Palace Hotel in Cripple Creek into a 30-room boutique hotel remain on hold.