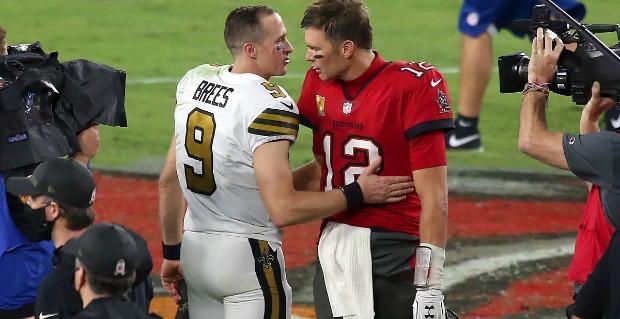 The New Orleans Saints’ Drew Brees is the NFL’s all-time passing yardage leader. The Tampa Bay Bucs’ Tom Brady is second. Brady is tops in passing touchdowns. Brees is second. The two legends and lock first-ballot Hall of Famers will meet for what is expected to be the final time next Sunday in the Divisional Round of the NFC playoffs as the Bucs visit the Saints at 6:40 p.m. ET. New Orleans opened as a 3-point favorite on the NFL odds.

Brady’s Bucs were 31-23 winners at Washington on Saturday night, which may have been a push on the spread depending when you wagered on the game at William Hill Sportsbook. TB12 threw for 381 yards and two touchdowns in his 31st career playoff win – that’s by far the most of any QB. Of course, it was Brady’s first as a member of the Bucs and it was also Tampa’s first playoff victory since the 2002 season when the franchise won its only Super Bowl. Mike Evans was in question with a knee injury but caught six passes for 119 yards.

New Orleans was a 10-point favorite Sunday and beat the visiting Chicago Bears 21-9. On his 42nd birthday, Brees, expected to retire after the season, threw for 265 yards and two scores. Michael Thomas returned from a stint on the injured list with five catches for 73 yards and a TD, and Alvin Kamara returned after missing Week 17 on the COVID list with 99 yards and a touchdown on 23 carries. The only player in the NFL who is older than Brees? Brady is 43, but he’ll be playing next season.

The other NFC game is Rams at Packers on Saturday at 4:35 p.m. Green Bay opened as a 7-point favorite. Those teams didn’t play during the regular season.

The Packers are off the bye week, and the Rams upset the Seahawks in Seattle on Saturday, 30-20. Rams QB Jared Goff wasn’t healthy enough to start with a thumb injury but was forced into action when John Wolford left injured. Goff was 9-for-19 for 155 yards and a TD and presumably will start this one. Rookie Cam Akers was most of the L.A. offense with 131 yards and a touchdown on 28 carries.

In the AFC, Baltimore visits Buffalo at 8:15 p.m. ET on Saturday with the Bills opening at 2.5-point favorites. Those clubs didn’t play this season. The Ravens are on a six-game winning streak following Sunday’s 20-13 victory at Tennessee. Lamar Jackson rushed for 136 yards and a TD in earning his first-ever playoff win. The Bills won their seventh straight this past Saturday, 27-24 over Indianapolis for their first playoff victory in 25 years.

On Sunday at 3:05 p.m. ET on CBS, the Cleveland Browns visit the Kansas City Chiefs, who opened at -9.5. Cleveland shocked the Steelers 48-37 on Sunday night for the franchise’s first postseason victory since New Year’s Day 1995. Even more stunning was the Browns did it without head coach Kevin Stefanski, a few of his assistants and a handful of players in COVID protocols. The team was able to practice only once all week. The Chiefs are off the bye. Kansas City didn’t play Cleveland this season.