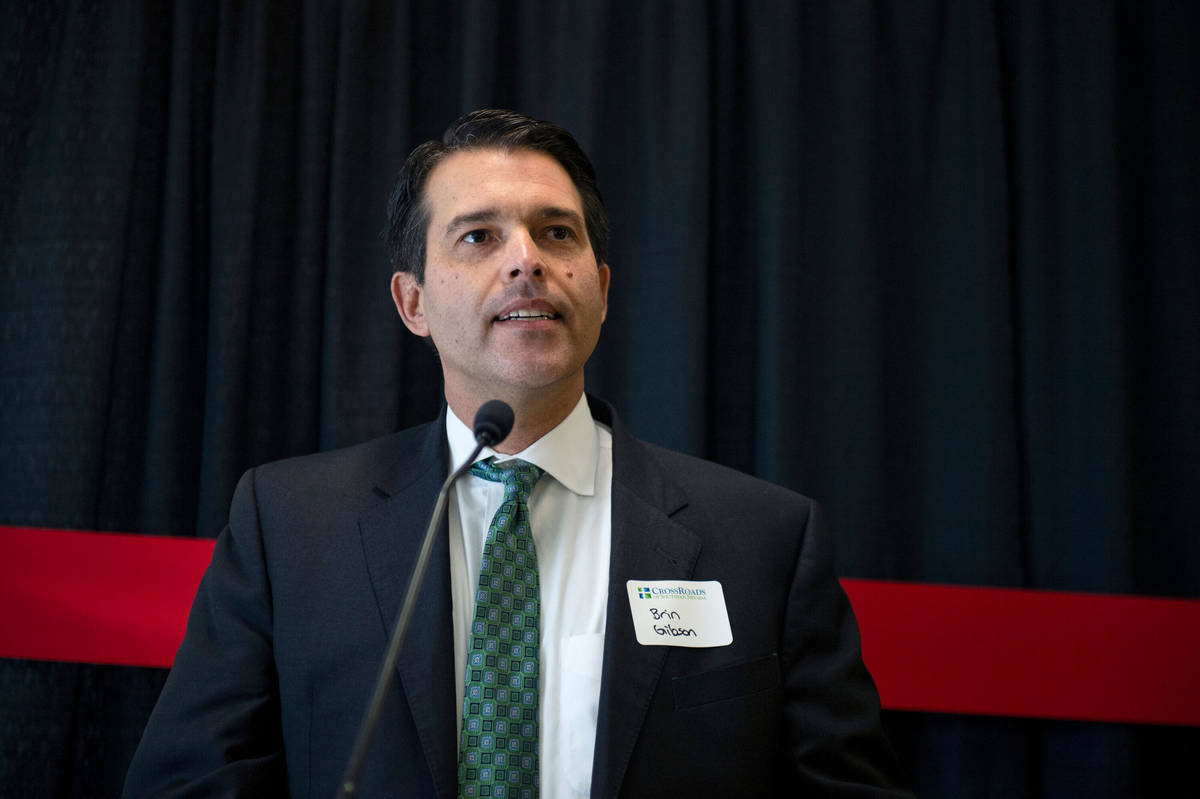 Brin Gibson said he was surprised when he got the call from the Gov. Steve Sisolak’s office asking him to become the new chairman of the Nevada Gaming Control Board.

Gibson was a lawyer with Brownstein, Hyatt, Farber, Schreck in Las Vegas for less than a year when he was asked to replace Sandra Morgan, who was tapped in late October to join the board of directors of Jacksonville, Florida-based Fidelity National Financial Inc.

“If I were to script the timing, it was not anywhere near what I would have wanted it to be,” Gibson said in a recent interview. “But that’s the way life is. Opportunities come at some of the most inopportune times, and you wish they were different. Timing is something that is largely out of our control, but it came.”

Now in his third month on the job, Gibson has gained his bearings and is focused on what he considers to be his top priority — helping the gaming industry navigate its way through the coronavirus pandemic.

Gibson said he’ll also be an advocate for technological solutions to existing shortcomings within the industry. That will mean modernizing the Control Board’s 39 gaming regulations currently on the books.

Although the process began well before Gibson took the helm of the board, efforts to modify regulations will begin Thursday when the Nevada Gaming Commission examines proposed amendments to four regulations. The commission also will get its first look at a proposed regulatory amendment that would enable remote patron identity verification on mobile gaming apps.

Gibson’s appointment as chairman was one of the swiftest in recent memory. The fifth-generation Nevadan, whose father is Clark County Commissioner and former Henderson Mayor Jim Gibson, was praised as the best possible choice Sisolak could have made for the post.

“I think Brin Gibson is an excellent choice, and I have a very high opinion of him; I commend the governor,” said attorney A.G. Burnett, a partner with Reno-based McDonald Carano who chaired the board from 2012 to 2017. “Brin will serve the state with high integrity and commitment.”

Morgan, Gibson’s predecessor, also praised the choice, applauding his knowledge of gaming law, which Gibson said he learned from his mentor, Robert Faiss, considered the leading authority in gaming law when he died in 2014.

“When I was a young attorney, I thought it would be a great way to learn the system and be a part of something that was far bigger than any of us,” Gibson said of his interest in gaming law. “In subsequent years, over the past four years, I had not thought about being a part of the structure.”

Gibson served as Sisolak’s general counsel from January 2019 to January 2020, assisting the governor’s office during two special legislative sessions last summer. During that tenure, he was chief legal counsel on ethics, transactional and legislative matters as well as protection of state interests in the gaming and cannabis industries.

Prior to that, he was the chief of the gaming division within the Nevada attorney general’s office, overseeing a staff of nearly 400 lawyers and legal support professionals. As chief of gaming, he acted as chief legal counsel to the Control Board, the Commission and the Nevada Gaming Policy Committee.

Gibson figures his longtime association with the industry will help him.

“Where a lot of people may have to learn an entirely new space of law, I already know it,” he said. “It’s very difficult to learn gaming law out of a book because it’s so intertwined with the history of the city. It grows much like a city grows.”

By that, Gibson means that regulations and policies may need to be adjusted to reflect assessments of risk.

“Many of the processes and procedures are anachronistic, to use a nice term. They were built for a different era when the threats were different. The threats were organized crime and skimming. Maybe we need to adjust our focus,” he said.

“Someone has to look out for them,” he said.

To that end, the top priority will be to help steer the industry through the pandemic. While that could mean additional restrictions on operations, he doesn’t expect that will be necessary.

Still, Gibson has no illusions.

“It is daunting,” he said. “There’s no question about it. I wish I could sit here and honestly say I have full faith and confidence that things are going to turn around within a month.”

”There are things that are out of control, there are a lot of new vaccines, people’s willingness to be vaccinated and how that works together with international travel, the potential breaking of habits among key gamblers and key Nevada-focused foreign gamblers,” he said. “We have a number of different questions we have to deal with and manage in addition to the convention industry, which is its own driver of the gaming space.”

Gibson doesn’t believe the gaming industry has been the cause of the further spread of the pandemic in Nevada.

“If gaming is a culprit of additional spread, which I don’t believe it is, possibly there would be additional directives,” he said. “I believe this pause, as the governor refers to it, will cause changing behaviors at the level that it needs to change at and I’m hopeful that we’ll actually be moving in the opposite direction fairly soon.”

Gibson acknowledged there is room for improvement and that there are a broad number of things regulators can do to get back to normal operations.

“We can be better,” he said. “We can implement better technology. We can strengthen our internal infrastructure. We can have better relationships with our licensees. We can ensure that we have more equity or less dramatic power dynamics between the workers and the people who own, control or run the casinos like we’ve had in matters that have been at the root of some of the issues that recently have happened in the industry,” he said. “We can do those things. Or, we can sit back and wait for it to pass and then address it all at the end. I think the latter is a very bad choice.”

Gibson expects cashless gaming strategies and touch-free transactions to play a role in the transition through the pandemic.

“There’s a lot of opportunity here,” he said. “I don’t like to just plod along. I like to take on big challenges and find a way to fix them. And this is definitely one of those.”

Are cashless systems one of the solutions to COVID-19 issues? To Gibson, the jury is still out.

“Cashless wagering is a simple way of funding gambling activities,” he said. “There’s going to be a huge push on the demand side. On the other side, on the regulatory side, I’d say that we want cashless wagering in some form or another because it makes it much easier to track activity.”

While cash-based still has issues, such as money-laundering problems the industry must guard against, cashless wagering is accountable, he said.

“The question is how do we do it in a way that respects the hundred-billion-dollar investment in brick-and-mortar casinos on the Strip and in traditional gambling? How do we do that?” Gibson said he doesn’t know the answer yet. “We have to find some middle ground, some way of doing it, so that we’re not left behind and we don’t leave a very important technology on the table.”

While Gibson is anxious to find regulatory solutions to the most vexing problems facing the industry, he’s not willing to speed ahead without careful analysis.

“I’m not going to turn this industry upside down, I can’t do that, it would be a dumb thing to do, but I’m going try to make it better and the only way to do that is to change some things,” he said. “So expect some change.”