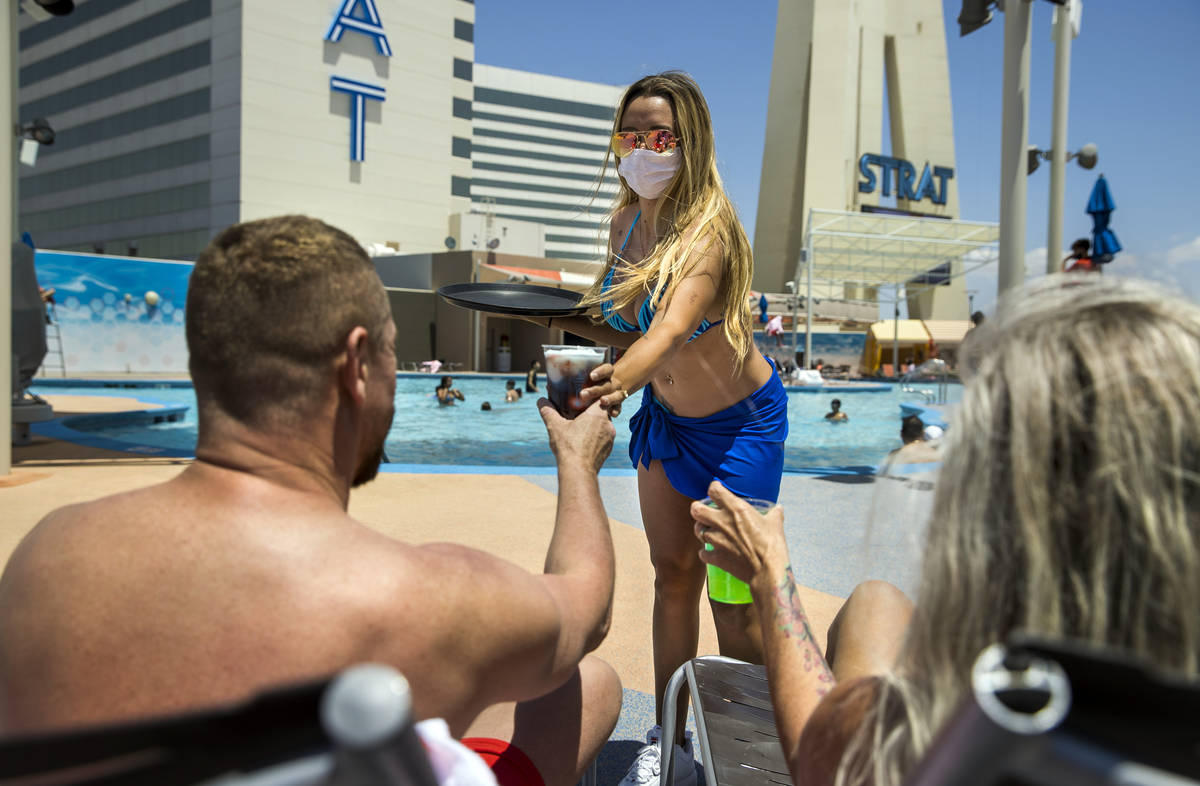 Nevada hospitality employees are in the fast lane to receive a COVID-19 vaccine but face a long line before it’s their turn.

In the state’s latest COVID-19 playbook, front-line casino and resort workers are in the fourth category of workers eligible for the vaccine through Nevada’s “frontline/essential workforce lane.” Workers in education and agriculture and certain state and local government employees are just a few of the groups ahead of them in line.

Leisure and hospitality employees make up a quarter of the state’s total private workforce. Thousands of these workers have been put face to face with visitors since June, when casinos reopened. Gov. Steve Sisolak recently extended into February a 25 percent capacity limit on casinos, which the state has previously identified as a source of spread.

“I think (getting hospitality workers vaccinated) is the first step to turning it all around,” said one Strip dealer, who was granted anonymity to protect her job at The Cosmopolitan of Las Vegas.

The latest vaccination guidelines from the state were announced Monday. Brian Labus, an assistant professor of epidemiology at UNLV and a member of the medical team advising Sisolak, said the updated playbook largely follows federal recommendations.

“There are local decisions we can make, but the basic groups are decided at the federal level and rolled out similarly state to state,” he said. But “we want to protect (hospitality workers) because they’re putting themselves in situations where they’re potentially at risk by being around tourists from all around the world.”

As of November, there were roughly 301,700 leisure and hospitality workers in the state, according to data from the Department of Employment, Training and Rehabilitation.

Labus said it’s not yet clear when hospitality workers will be eligible for the vaccine. He expects that priority groups will continue to shift as federal guidance is updated.

“While Nevada’s resorts continue to take responsible actions to protect employees and guests … swift vaccine access will provide another layer of protection for resort employees, their families and the public,” she said in a statement. “Further, protecting the frontline members of Nevada’s economic engine sends a clear message to visitors and meeting and convention organizers that Nevada is the world’s safest travel and tourism destination.”

Culinary Local 226, which represents about 60,000 workers in Las Vegas and Reno, has been working with Sisolak’s office and the resort association to ensure that hospitality workers have access to the COVID-19 vaccine, said Geoconda Argüello-Kline, the union’s secretary-treasurer.

“The hospitality industry is critical for the well-being of the entire state of Nevada, and the Culinary union is supportive of the governor’s designation of hospitality workers as essential,” she said in a statement.

MGM also provided a statement saying the company will make “the necessary resources available to achieve this critical objective” of immunizing workers.

Spokespeople for Las Vegas Sands Corp., Caesars Entertainment Inc. and Boyd Gaming Corp. did not respond to requests for comment. Spokespeople for Wynn Resorts Ltd. declined to comment, and a spokesman for Red Rock Resorts Inc. referred to the resort association’s statement.

The state’s new vaccine rollout plan divides eligible populations into two concurrent lanes: one based on occupation, the other based on age, underlying health conditions and housing status.

Labus said some hospitality workers will have early access to the vaccine if they fall in a higher age bracket or have underlying health conditions.

“What you’re left with … are people who are younger and healthier to begin with,” he said. “We’re not talking about leaving everyone in hospitality until the end. … There may be a large portion already vaccinated by the time we open it to the group of workers.”

Gladis Blanco, a guest room attendant of eight years at Bellagio and a Culinary member, said hospitality workers are on the front lines of the pandemic, interacting with customers from across the world. She thanked Sisolak for “acknowledging that hospitality workers are essential” and said she would feel “peace of mind” that a vaccine could keep her and her family safe.

“I will be first in line for the vaccination when it is my turn,” Blanco said through a Culinary spokeswoman statement.

“It’s easy to say we should be higher up, but then you have to decide who to move down,” he said. “It’s hard to say who I should jump in front of.”

A cook at an MGM property, who is being granted anonymity to protect her job, said she is comfortable waiting to receive the vaccine.

She acknowledged that vaccination could protect her and others from the coronavirus, but she said she is concerned that current vaccine iterations wouldn’t prevent a newly identified, more contagious strain. The cook said she already has been exposed to COVID-19; her mom contracted it and suffered “pretty bad” symptoms.

Last month, President-elect Joe Biden’s surgeon general nominee, Vivek Murthy, said on NBC’s “Meet the Press” that there’s “no reason to believe that the vaccines that have been developed will not be effective against this virus as well.”

The cook said she was hoping for an “alternative to come into place” with higher efficacy by the time she was eligible, though she would take the shot if her employer made vaccination a condition of her job.

“I don’t want to be exposed to something that’s stronger than what I witnessed my mom going through,” she said. “It would just depend on the circumstance.”

The Southern Nevada Health District notes that the Moderna and Pfizer vaccines are, after both doses, more than 90 percent effective at protecting people from getting sick with COVID-19.

They are the only vaccines currently approved for COVID-19, and they were developed with the same level of U.S. Food and Drug Administration review as vaccines for polio, smallpox, meningitis and more, according to the health district.

The Cosmopolitan dealer said she was ecstatic to learn that casino workers would be included in the prioritization lane.

“It’s going to be exciting to see what’s around the corner (once the vaccine is widely distributed),” she said. “I feel like the whole world is going to come to Vegas.”

The Review-Journal is owned by the family of the late Sheldon Adelson, founder of Las Vegas Sands Corp.