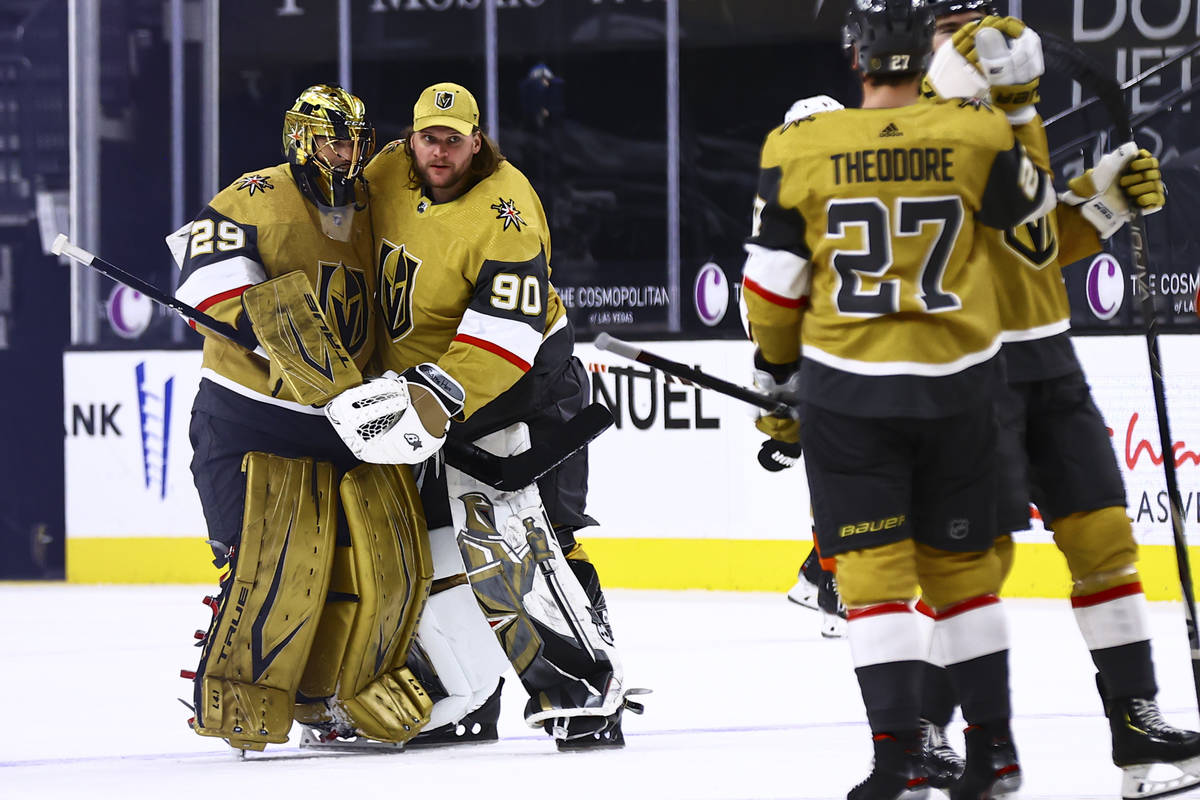 In the gambling world, there’s little debate about Golden Knights goaltenders Robin Lehner and Marc-Andre Fleury. Not because there’s a clear answer, but because the answer doesn’t matter.

There is virtually no drop-off between Lehner and Fleury, especially on full rest during the regular season, handicappers and oddsmakers say.

“The fans and the media are rocking the boat on this more than the players and bettors,” handicapper Alex B. Smith said.

Smith (@axsmithsports) said that for most NHL teams, the difference between the starting and backup goaltender is worth about 20 cents in the betting line, but he calculates no significant difference for the Knights.

When Smith ranked each team’s goaltender and backup this past week, he said he gave Fleury a 5 cent edge over Lehner based on the few games played this season. Instead of pitting the goaltenders against each other, Smith said it was more important to track how they match up against specific opponents.

Handicapper Dana Lane (@DanaLaneSports) said he showed “no difference at all” between Lehner and Fleury.

“I’m much more concerned with depth and special teams production than who’s in goal,” he said.

The Knights acquired Lehner in a trade in February 2020, and he eventually took over the position from Fleury, starting 16 of 20 playoff games. Controversy erupted during the postseason when Fleury’s agent tweeted a photo of Fleury being stabbed through the back by a sword with coach Pete DeBoer’s name on the blade.

Lehner signed a five-year, $25 million extension in the offseason, and the Knights opted to retain Fleury to give them reliable depth in this shortened season.

Westgate sportsbook vice president of risk Ed Salmons agrees that on a night-to-night basis in the regular season, the difference between Lehner and Fleury is minimal, though he strongly favors Lehner, especially in the playoffs.

The market has moved against the Knights in the games Fleury started, but those changes aren’t as significant when the Knights are heavily favored in the -200 to -180 range, as they have been in every game this season, Salmons said. A better gauge will come in games against top teams such as Colorado and St. Louis, he said.

Lane said any moves against Fleury in his first two starts might also be attributed to bettors believing that Anaheim and Arizona would bounce back after losing the first games of the two-game series, regardless of the opposing goaltender.

In the end, Salmons said, Lehner vs. Fleury wasn’t something he had to worry about, especially given the way fans bet the games.