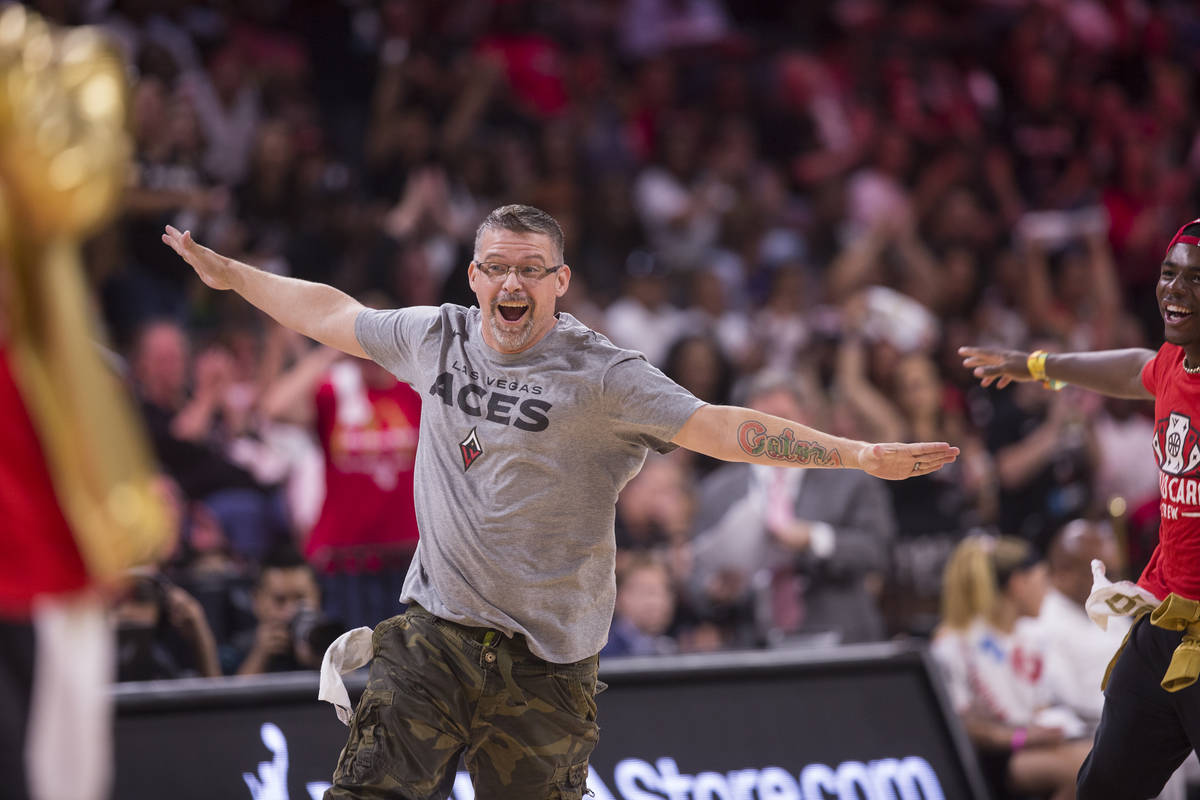 Maybe we start calling it “The Mich,” like the sound a beer bottle makes as its cap is cracked off.

Whatever the case, or 12-pack, it’s definitely Beer 30 at Mandalay Bay Events Center. The venue is being renamed Michelob Ultra Arena. Mandalay Bay announced the new moniker in a news release Thursday. Parent company MGM Resorts International worked the deal with the beverage company Anheuser-Busch for the first naming partnership at the 22-year-old, 12,000-seat venue.

Mandalay Bay President and Chief Operating Officer Chuck Bowling said the Anheuser-Busch brand overrode the fact that the product is not available for consumption for anyone under the age of 21.

“Just like MGM Resorts is an entertainment leader in the Entertainment Capital of the World, Anheuser-Busch is a leader in creating one-of-a-kind experiences,” Bowling said in a phone chat. “We expect them to be great marketing partners.”

The terms of the deal are only described as “multiyear,” or more than a single year. But Bowling said, “We expect this to be a partnership for many years to come.” The new name goes into effect immediately.

The venue’s leading sports tenant for the past three years has been the WNBA’s Las Vegas Aces. MGM Resorts sold the franchise to Las Vegas Raiders owner Mark Davis, leaving the possibility the team might opt for a different home court now that it is not directly affiliated with Mandalay Bay and MGM Resorts.

But Bowling said he is confident the team will continue to use Michelob Ultra Arena as its home for the foreseeable future.

“The Aces will continue to play at Mandalay Bay, and continue to call it home,” Bowling said. “It is one of the premier WNBA facilities in the country. Our focus is to deepen our relationship with the NBA and attract an NBA team as an official partner, and we got the window to bring the WNBA here. Mark has been front and center. There has been no bigger fan of the Aces and of Mandalay Bay Events Center.

“I think we’ll be around to see Mark Davis bring a WNBA championship to Michelob Ultra Arena.”

Journey, Maroon 5, Motley Crue, Barenaked Ladies, Yanni and Ozzy Osbourne have all performed in the venue.

And the arena was the setting for the climatic boxing match between Rocky Balboa and Mason “The Line” Dixon in Sylvester Stallone’s 2006 film “Rocky Balboa.”

Matt Davis, head of U.S. Sports Marketing for Anheuser-Busch, reiterated Las Vegas’ position as a leading sports and entertainment destination, with the newly minted arena in the mix. “As the world returns to traveling and enjoying entertainment, we look forward to all of the events to come at the Michelob Ultra Arena.”

I do recall, somewhat foggily, the first show I saw at the events center was Sugar Ray just after the venue opened in 1999. A bar was set up onstage for Mark McGrath’s enjoyment, and I’m betting a certain beer was served then, too.

A local theater company fighting the good fight, Las Vegas Little Theatre stages “Love Letters” at 8 p.m. Friday and Saturday and 2 p.m. Sunday at the theater at 3920 Schiff Drive. The company has been knocked off-kilter financially during the pandemic and needs support. LVLL was founded in 1977 and is the Southern Nevada’s longest-running community theater.

This production is a noble effort. “Love Letters” is a theater piece focused on letters exchanged through a lifetime between two people who grew up together and parted but continued to live as confidants. The actors read the letters aloud, swapping sections, allowing the audience to retrace their lives.

Teresa Fullerton and Glenn Heath co-star Friday, with Heath and Monica Johns on Saturday, and April Saulin and Michael Kaczurak on Sunday. The cost is $30 (a mere pittance), tickets are at the LVLT box office at 702-362-799, or www.lvlt.org. Click there and get there.

The Valentine’s Day-themed, Ultimate Date Night packages is worth a spin. It’s a sampling of three of Aria’s delicious restaurants: Catch, Carbone and Jena Georges Steakhouse, all in a single sprint, with immediate seating and 10 signature dishes. It ends with an optional helicopter ride over the Strip. The dessert after the dessert, as it were. Catch the details at fingerlickingfoodietours.com.

Vegas vocalist Gabriella Versace, from “Sexxy” at Westgate Las Vegas, appears this weekend in the adult variety show “BurlesQ” at Alexis Park. The show runs 10 p.m. Fridays through Sundays, though this weekend’s are sold out. Producer Pete Housley is also looking to fill the 6 p.m. slot slot, as “Motown Extreme” is loading out Feb. 28.

Elisa Fiorillo (protege of Prince) and Joey Melotti (band leader of Barry Manilow) play The Vegas Room on Friday, Saturday and Sunday. Dinner is 6:30 p.m. and the performance at 8 p.m. Friday and Saturday. Sunday brunch starts at 1 p.m., with singing/piano playing to commence at 2:30.

Fiorillo spent five years in Prince’s New Power Generation lineup ending in 2014. She knew the contemporary music legend for 25 years, recording with him in his Paisley Park studio in Minneapolis. Fiorillo has also backed Luciano Pavarotti, Dave Koz and David Cassidy, among others.

In Las Vegas, Fiorillo has performed with Clint Holmes, Kelly Clinton-Holmes and Earl Turner. She’s also taken the stage, unbilled, with Santa Fe & The Fat City Horns. Her shows with Bruce Harper’s Big Band at Myron’s Cabaret Jazz showed her vocal versatility, and passion for the show band format. This weekend is Fiorillo’s debut at The Vegas Room, but we expect she’ll be back.

Master Magician Lance Burton posted a few photos of himself driving a tractor on his farm in Columbia, Kent, a couple weeks ago. It’s a John Deere. We know it’s a John Deere because it’s green.

Burton and I talked about tractors during a “PodKats!” episode over the holidays. I told him that in Idaho, farmers sometimes asked prospective farm hands the colors of tractors. Like, “What color is a John Deere?” If the answer’s, “Yellow” he ain’t gonna make it.