If your Las Vegas poker trip was a complete failure due to some unfortunate bad beats, you can still go home a big winner on your way out of town. A lucky woman recently binked a $300,000 jackpot while waiting for her flight at the newly named Harry Reid International Airport (previously McCarran International Airport). 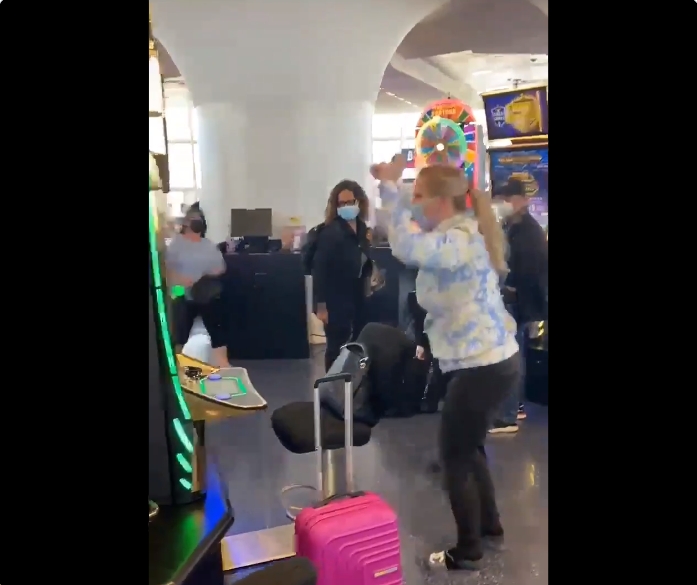 She seems a lot more excited than when Dan Colman shipped the One Drop in 2014 for $14 million. (Image: Twitter/Las Vegas Locally)

The woman, identified only as Megan H. from Flower Mount, Texas, posed for a picture next to the Wheel of Fortune slot machine she played afterwards. Her celebration was captured in a brief video posted to Twitter.

How much she put into the machine before hitting the jackpot is unknown. But it’s safe to assume she invested far less than the $302,000 she took out. Perhaps, she upgraded to First Class on her flight home.

Las Vegas is a unique city in which visitors simply can’t avoid slot machines no matter how hard they try. They’re everywhere in this town, at casinos, grocery stores, bars, and even the airport. For every 10 residents in the metro area (approximate 2.1 million population), there is one slot machine available. There are nearly 200,000 slot machines throughout the Valley. And every once in a while, one of them makes some lucky player wealthy within seconds.

Megan won enough money on one spin of a slot machine to nearly buy an average Flower Mount, Texas home in cash. And she didn’t even have to work for it or dodge a dozen flush draws to win that money like she would have had she entered a poker tournament.

Many tourists play slot machines at the airport while waiting for their flights. It’s sort of a last hurrah, especially for those going back home to towns without nearby casinos. Most of them lose an extra $20 or $100 on the way out of town. The casinos always win in the end. But Megan is the exception to that rule.

She’s going home with enough money to buy into the WSOP Main Event for the next 30 years. And she hit the jackpot on the most played slot machine in history. Wheel of Fortune slots, based on the popular TV gameshow hosted by Pat Sajack, are available is just about every casino in the US, even the Harry Reid International Airport in Las Vegas.