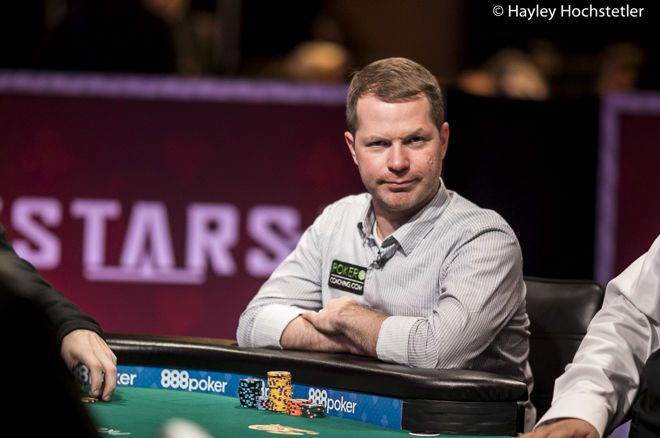 In this hand from the World Series of Poker (WSOP) Main Event, I flop nothing but keep bluffing nonetheless. Sometimes you just have to put the pressure on when your opponent seems a bit timid!

It was early on Day 1 and everyone was deep stacked. The blinds were 75/150 and a player limped from early position. I was in the small blind with the

and was fine either calling or raising. If we go the latter route, we want to make it something like 700 so that our opponent folds some portion of the time. I’d prefer raising from a more in-position spot like the button or cutoff, but I still make it 700 to go.

. We have nothing, but the board contains almost nothing. It’s hard for anyone to have a two given the preflop action, so it becomes a question of who has more ace-kings in their range as well as big pocket pairs. That’s definitely me, and given my opponents just called preflop, I can start to discount such hands from their range.

“You have to be careful trying to get people to fold top pair, but if you use big bet sizes and your betting line tells a very reasonable story like you have aces, for example, it can definitely work.”

How do I get fold equity across multiple betting rounds? First, you want to start by betting small so that your opponents will call with everything that is not just total trash, and then ramp it a little bit on the turn. On the river, you go for a big bet. Essentially, trying to make your opponent think you have aces and are trying to get called by their obvious king, and to be fair if they’re still around by the river they probably have a king.

You have to be careful trying to get people to fold top pair, but if you use big bet sizes and your betting line tells a very reasonable story like you have aces, for example, it can definitely work.

Given all that, I like a small continuation-bet. If we bet and both players call we’ll probably give up, but if just one then we’ll continue bluffing. I bet 600, the big blind folded, and the limper called to see the

With 3,400 in the pot, I wanted to make a bet big enough that it’d make any hand worse than a king a bit uneasy, so pocket sevens, nines, etc. I kept the pressure on by betting 2,000 with the intention of firing something like 7,500 on the river if I got called.

I didn’t have to worry about that though as my opponent made my life easy by folding. My opponent probably folded something like ace-high, which I either lose to or chop with, or a medium pair like pocket fours. I think this is a pretty common spot that a lot of people do not take, they take the very passive route just trying to flop the nuts hoping that their opponent will make an egregious error postflop and pay them off for 300 big blinds.

That’s not going to happen all that often. The way you consistently chip up early in tournaments is by applying small amounts of aggression in spots like this where you can get opponents to fold out the vast majority of their range. Pay attention and look for spots like this, because this is how the best players in the world are chipping up.

While everybody else is trying to make the nuts and dwindling down, the best players are reaching out a little bit and picking up the medium pots their more passive players aren’t willing to take.

For a more thorough breakdown of this hand, check out my thoughts in the following video: