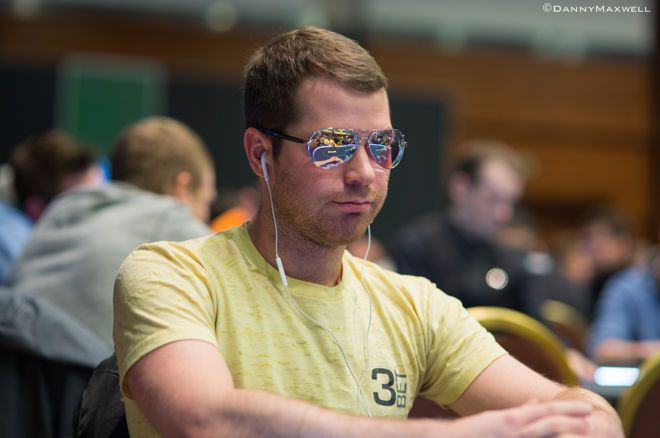 It’s always nice to flop a set, but even more so when it happens in the World Series of Poker (WSOP) Main Event in a multi-way pot. That’s exactly what happened to me in a hand that is featured in this week’s strategy column.

It happened in the 75/150 level when the player in the hijack opened for 400 and the cutoff called. I looked down at the

flop. Action checked around to me, which is kind of a bummer as it usually means they’re going to fold to a bet. However, we still want to bet in this scenario because if we’re against a king or flush draw, they’re never going to fold, and some hands, like

, will opt to float.

Given that, we bet 1,200 and both the big blind and original raiser folded. The player in the cutoff called and the

appeared on the turn. The cutoff checked and despite the third club, I bet 1,500. Could my opponent have a flush? Sure they could, and if they do, hopefully, they don’t raise too big. However, if they have a king they’re almost certainly calling along with and hands they may have floated containing a queen.

“You don’t want to be betting huge if it’s going to force your opponent to act well, you want your opponents to make mistakes.”

Our main concern here is not getting protection from the random hands with a club. In order to price out such hands, we’d have to bet more like 3,500. The problem there is a lot of the worse made hands are going to fold, probably all of them. You don’t want to be betting huge if it’s going to force your opponent to act well, you want your opponents to make mistakes.

Here that means betting small and hoping they call with a hand that is drawing thin. If the river is a club, we can likely go check-check or even fold to a big bet.

As it happened, my opponent woke up with a check-raise to 3,500. When my straightforward opponent raised, I have to assume their range contains a whole lot of flushes and maybe hands like

, or a king with a club draw. It’s tough to know. Even if my opponent has a flush I think we’re getting a good price to call drawing to a full house. Notice we have to call just 2,000 into a pot that is going to be 11,000.

We call and the river is the

. Our opponent bet again but went small by placing out 2,800. I don’t think we have any reasonable option here other than to call. I’m not excited about it, but usually, when an opponent bets small like this on the river they have a marginal hand. Whenever you have a hand that beats all the bluffs and perhaps some hands your opponent is overvaluing, you just can’t fold.

I would not be the least bit shocked if my opponent turned up a flush, but I also wouldn’t be surprised if they turned up

. I called and my opponent rolled over the

How could have this hand played out differently and how could it have benefitted me? Could I have folded the river, I don’t really think so. Folding when you’re getting good pot odds – here I needed to be good just 20 percent of the time – is hard to do and can be exploitative.

For a more thorough breakdown of this hand, check out my thoughts in the following video: