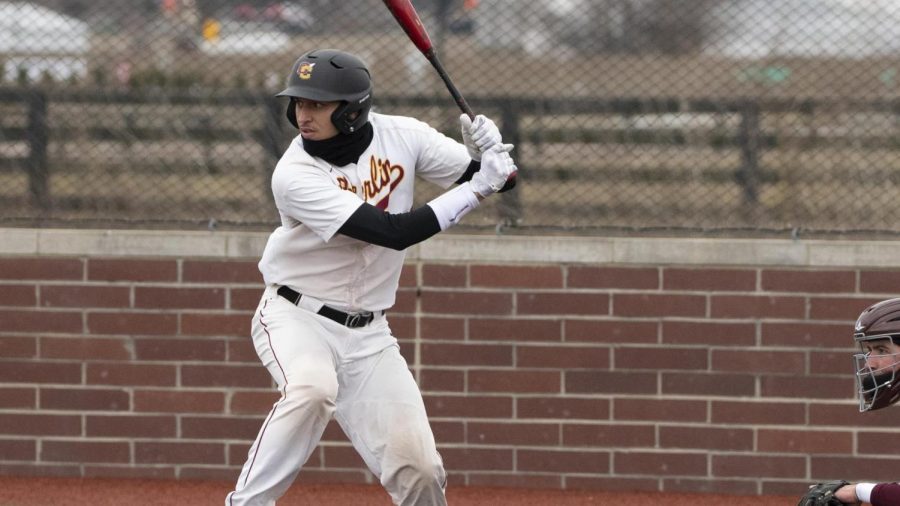 College third-year and varsity baseball and basketball player Darien Knowles has bounced around a lot. Since graduating high school, he has been enrolled at four different schools. His winding academic journey was supposed to stop last spring when he started at Oberlin, but the COVID-19 pandemic ensured that nothing would come easy for him. Still, he has managed to adjust and acclimate thanks to help from his teammates, his coaches, and his other passion: playing poker.

This interview has been edited for length and clarity.

Where were you before Oberlin?

I graduated high school and I decided to do a year of prep school in Arizona [at Hillcrest Prep] after graduation because a lot of college coaches wanted me to gain weight before college. So, I went to prep school to try to gain the weight. Things went well. Basketball wise, recruitment wise, everything was looking good. And then I ended up having surgery on both of my knees. That knocked me out the following year while I had to rehab and recover. Then I spent a year at Mercyhurst University in Erie, Pennsylvania. That just wasn’t a good fit coaching wise, so I went to Glendale Community College in Arizona to get re-recruited. I ended up tearing my meniscus again in the first game of the season, which sucked. So now I’ve had three knee surgeries. And then, after being out in Arizona for those two years, I was just really, really tired of being that far from home. I’m from Amherst. I actually live like 10 minutes from the school.

How did you end up at Oberlin?

I’ve had a relationship with the Head Baseball Coach Adrian Abrahamowicz since I was in high school. I’ve been working with him for years and it never really hit me that there would be any chance I would attend Oberlin. But, when I was transferring from my JUCO [junior college] and I realized I wanted to play baseball, I was actually on campus at Oberlin with Abrahamowicz working out and my mom came up and we’re all talking and it clicked … We put it in motion and I got accepted.

How did you become a dual sport athlete?

My whole life I was actually the baseball kid, and basketball was something that I did for fun. Then, my junior year in high school, it kind of flipped in my head. I started to love basketball more and baseball took a backseat. I still played baseball my last two years of high school, but I didn’t take it as seriously. So, after I graduated, I didn’t play baseball again until last spring. At first I wasn’t sure if I was going to be playing both here or not, but the basketball coach approached me and the baseball coach was very cool about it, so I decided to play both.

What was it like transferring to Oberlin last spring and having your first semester and baseball season cut short?

It was really upsetting. We went through our full pre-season. We had been practicing for a while and then we got to play four games before they ended up cancelling the season. We were actually like two or three days away from leaving to go to Arizona for a couple of days, which we were all looking forward to. But I got to meet the guys, and they’re all great.

Have either of your teams been able to help you with the transition to Oberlin?

Shout out to [College fourth-years] Lawrence Hamilton and Alexis Castillo. Those are my guys, but really both teams, all 30, 40, 50 guys — as soon as I came in the atmosphere and environment that they created, it was incredible. I walked in on day one, not knowing a single person, but left feeling like I was almost immediately a part of this family and culture. I think the school community does a perfect job of that as well. Everybody I’ve met has been so down to earth and just welcoming and helpful. In my experience, at my other colleges, it’s almost difficult to get somebody that wants to help you, but here it seems like anybody would be willing to help you with anything.

Outside of sports, what was it like transferring right before the pandemic hit?

It was a lot, especially because Oberlin is so far advanced [academically] compared to where I was, so I was trying to transition into a harder curriculum. Then the pandemic hit and it just all happened so fast. At first, it didn’t seem real. It was like, okay, there’s a case in the U.S. No big deal. And then, a week later, the whole country is upside down and we’re all at home. But I think academically, it almost calmed things down because there was so much else going on. A lot of my professors realized that, and kind of pulled back a little bit and became a little more lenient. So it actually, I think, helped my academic transition. But it was still a lot to process.

What do you do outside of athletics and academics?

I watch a lot of movies and TV shows. I bowl, but mostly I play a lot of poker.

Do you play online or do you have a group you play with in person?

One of my buddies has a huge basement around the corner and before the pandemic we’d all go play over there. It’d be anywhere from eight to like 22 people. If we got that many people, then we’d have two tables. But I’ll go play at the casino or online. I’ll play anywhere.

Would you consider yourself to be good or is it just for fun? If you went to Vegas, how would you feel about your odds of winning?

I consider myself to be good, 100 percent. I think we’re all good. In my friend group, there’s one or two of them that are top level, like could almost compete professionally. Then there’s me and then the rest. I’d do pretty good in Vegas.

I’ll say, for the football fans, that the Browns are going to the Super Bowl next year. And, for the basketball fans, LeBron James is the GOAT.