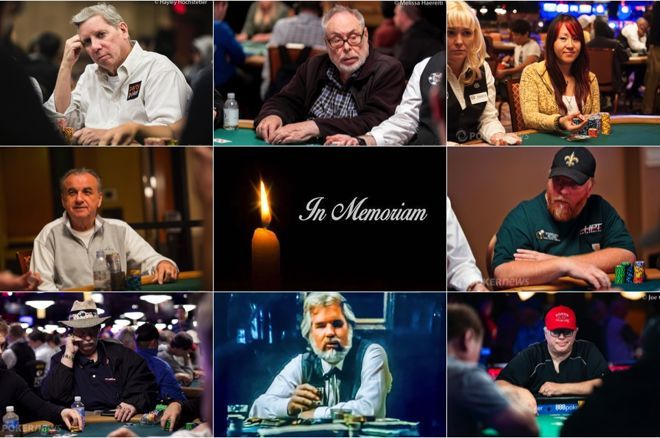 There’s no denying that 2020 was a rough year for many reasons, but in the poker world, one of the biggest was in regards to those we lost. Unfortunately, the year was littered with unexpected deaths, from a Poker Hall of Famer to a Grammy winner, from regional grinders to old school vets.

Below, PokerNews takes a look back at those we lost in 2020 and dives a bit into their poker accomplishments. For more on each, be sure to click their name to check out PokerNews’ original write-up.

The poker world suffered many losses in 2020, but few were felt more universally than that of Poker Hall of Famer Mike Sexton. The longtime WPT commentator had fought a private battle against prostate cancer, which spread to other organs resulting in him entering hospice care.

In his final days, Sexton got to listen to poker friends and family share stories and memories of the man, who is deemed one of the greatest ambassadors the game has ever seen. Sexton’s life and contributions to the game are enough to fill a book, and indeed they did in his 2016 autobiography Life’s a Gamble.

As a player, pioneer, visionary, and ambassador, Sexton was a titan of the poker industry. His contributions and impact will be remembered for years to come, and have already been immortalized by the WPT, who renamed their Champions Cup to the Mike Sexton WPT Champions Cup after the man.

Two-time gold bracelet winner Rod Pardey Sr. passed away on August 1 at the age of 75. His passing came a month after he suffered a major stroke. A former professional bowler, Pardey Sr. was largely regarded as one of the best seven-card stud players in the world.

In March, legendary musician Kenny Rogers passed away from natural causes at the age of 81. The three-time Grammy Award winner’s career spanned six decades and saw him release 65 albums and sell more than 165 million records.

While he wasn’t a poker player, Rogers left his mark on the game thanks to his hit song The Gambler, which gave the sage of advice “You’ve got to know when to hold ’em, know when to fold ’em.”

In 1979, Rogers performed the song at the World Series of Poker at Binion’s Horseshoe.

“The Gambler series has always held a special place in my heart,” Rogers once said. “I loved making those films that grew out of a character in one of my favorite songs.”

In July, the poker world received the shocking news that Susie “Susie Q” Zhao was gruesomely murdered in Michigan at the young age of 33. Zhao, who was had several deep runs in the WSOP Main Event, was well-known on the West Coast where she often competed on “Live at the Bike.”

“She was one of the bubbliest and most vivacious opponents I’ve ever had,” wrote Clayton Fletcher, who played with Zhao in the 2015 Main. “She was a very strong player who also liked to have fun at the table.”

Jeffery Morris, 60, was arrested and charged with first-degree murder. He will stand trial in for Zhao’s murder in early 2021.

In October, poker veteran Sam Grizzle unexpectedly passed away at the age of 67 after suffering a massive stroke. A witty fast-talker, Grizzle was perhaps best known as the foil to Phil Hellmuth during the 2003 WSOP, which was featured prominently on ESPN broadcast.

Grizzle, who amassed $1.3 million in lifetime earnings, was a gruff character of the game. He actually had his biggest lifetime cash just months before his death. In the midst of a strong run during the WSOP.com portion of this summer’s bracelet series, “texasmolly” finished third in Event #10: $600 No-Limit Hold’em MonsterStack for $77,725.

Darvin Moon, who famously finished runner-up to Joe Cada in the 2009 WSOP Main Event after beginning the final table as chip leader, died in September at the age of 56. His passing came days after surgery and was attributed to a blood clot.

“He was a man of deep principle,” said Poker Night in America founder Todd Anderson, who described his friend as “100% authentic.”

He added: “He didn’t feel right about it. I’m not sure if there’s another person on Earth who would have turned that down. Instead, he wore his famous New Orleans Saints cap the whole way through the tournament. Eventually, it paid off in other ways when the owner of the Saints invited him to sit in his box at the 2010 NFC Championship game and later he went to the Super Bowl as his guest.”

A hard-working logger from Maryland, Moon was the epitome of a recreational player, your average Joe who just enjoyed playing the game.

For WSOP Circuit grinders, Texas’ Bob “Big Tex” Talbot was a familiar face at the felt, especially at stops in the south and Midwest. Unfortunately, Talbot passed away on July 8 at the age of 73.

Robert Gray, a poker player who lived in Las Vegas and was known to many fellow grinders as “A-Game Rob,” died from COVID-19 in August at the age of 56.

Gray had amassed $440K in lifetime tournament earnings including a big one in 2019. That is when he notched his biggest cash ever when he came very close to winning a bracelet in Event #27: $1,500 Seven Card Stud Hi-Lo 8 or Better. Ultimately, he’d have to settle for second place and $88,254 when Michael Mizrachi got the better of him heads up.

On September 13, the poker world lost successful Irish businessman and bracelet winner Alan Smurfit at the age of 77. His passing was confirmed by The Irish Times. Smurfit began competing at the World Series of Poker in 2006, and just a year later captured gold when he took down a 2007 WSOP $ 1500 Pot-Limit Omaha event for a career-high $464,867.

Smurfit is survived by his wife, Guadalupe, and three children, Peter, Alan and Anne; two brothers, Michael and Dermot; and one sister, Barbara, according to his death notice.

Ken Tilden, 78, passed away in as a result of COVID. Tilden was a poker fan and well-known in the Massachusetts poker community.

Born in Brockton, MA, in 1942, son of the late Richard and Clemetime Tilden , he graduated from Brockton High School in 1960. Before his retirement in 2010, he was employed as Deputy Director of Surplus Properties for the state of Massachusetts for approximately 20 years.

He was a member of the U.S. Navy Reserves from 1960 to 1966, serving two years of active duty from 1961-1963 on the USS Camp out of Newport, RI. He was also a member of the Central United Methodist Church in Brockton. He was the beloved husband of Janis E. (Crossman) Tilden for 56 years.