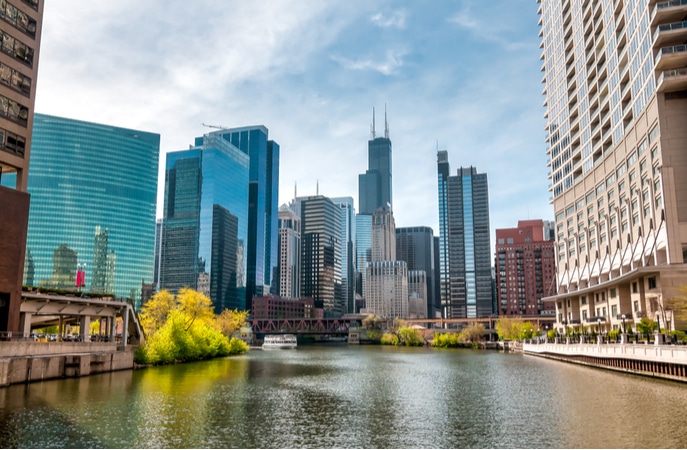 The Illinois Gaming Board released its first set of sports betting revenue reports Tuesday since going live in March, and the biggest takeaway was the impact of Executive Order 2020-41 in which Gov. JB Pritzker suspended the legally mandated in-person registration provision required for mobile sports wagering in June.

According to the reports, the combined handles in Illinois for March, June, and July — there were no wagers placed in April and May due to COVID-19 restrictions during which all 10 casinos across the state were shuttered and no mobile sports betting was available — totaled nearly $60 million with only Rivers Casino in Des Plaines and Argosy Casino Alton accepting wagers in that time frame.

BetRivers through Rivers Casino launched June 18, two weeks after Pritzker’s first issuance of Executive Order 2020-41. That executive order was renewed in late June and allowed to lapse in late July. Pritzker restored it through Executive Order 2020-52 on Aug. 19. For the first go-round, BetRivers was the only mobile/online sportsbook available.

The latest extension is set to expire Saturday pending a renewal by the governor. The field of sports betting operators in Illinois has grown substantially since Aug. 1 and now includes seven retail sportsbooks and four mobile ones. Both DraftKings and FanDuel have been rallying customers to lobby the governor’s office to make remote registration permanent.

Rivers Casino was the first retail sportsbook to launch in Illinois in March, with the Argosy close behind. Six days of sports betting were available prior to the shutdown caused by COVID-19 restrictions, and bettors laid down about $950,000 for completed events with a hold of 7.58%. The two sportsbooks combined for slightly more than $72,000 in revenue, and the 15% tax rate for sports wagering in the state resulted in slightly less than $11,000 reaching Illinois tax coffers.

One statistic that instantly stands out is the willingness of Illinois bettors to test their luck at parlays, which accounted for nearly one-third of overall handle with slightly less than $303,000 wagered. With the NBA in full swing and college basketball nearing the NCAA Tournament at the time sports betting went live, it was no surprise basketball was the primary driver of handle, accounting for slightly more than half of the overall figure at just over $505,000.

Few, if any, were expecting Pritzker to issue Executive Order 2020-41 on June 4, and BetRivers was the first to market on the digital side two weeks later. That opened a window of nearly six weeks during which BetRivers was the lone mobile sportsbook in Illinois, and the first 12 days of operations generated handle on completed events of slightly more than $7.8 million and a hold of 4.7%.

While the hold was notably lower, revenue from the increased handle improved five-fold to nearly $370,000, with the state collecting another $55,000 in tax revenue. With a limited number of sporting events on the schedule, wagering on European soccer became a surprising draw for bettors — the $4.2 million in handle generated from those matches accounted for more than half the overall handle — while golf and MMA each also cleared $1 million in handle.

Casinos across the state were allowed to re-open July 1, albeit at 50% capacity, and more sports started to come online. The month also showed a glimpse of the potential both Chicago and Illinois have as sports betting markets, and why Rivers Casino parent Rush Street Interactive was so eager to have a delay in the launch of stand-alone mobile sports betting platforms added to the new law.

Again, soccer proved to be a big hit among bettors, leading the way with $20.5 million in handle. Wagering on baseball also proved popular with Major League Baseball back in business — which makes sense given both the Chicago Cubs and Chicago White Sox currently lead their respective divisions — as people wagered nearly $17.3 million.

BetRivers’ mobile handle could be a promising sign for DraftKings at Casino Queen, which launched its retail and mobile sportsbooks simultaneously Aug. 5 and was one of the beneficiaries of Pritzker restoring Executive Order 2020-41 two weeks later.

FanDuel, which recently picked up the baton from DraftKings regarding an email push telling users to lobby Pritzker and state representatives to make the suspension of the in-person registration provision permanent, launched its mobile platform Aug. 28 and its retail sportsbook through Par-A-Dice Casino in East Peoria last Thursday.

The three other active retail sportsbooks — William Hill at Grand Victoria Casino in Elgin and Hollywood Casinos in Joliet and Aurora — also launched in August.

PointsBet, which launched online/mobile Saturday via Hawthorne Race Course, will ultimately have retail locations at the main track and OTBs in Crestwood, Oakbrook Terrace, and Prospect Heights as allowed by law.