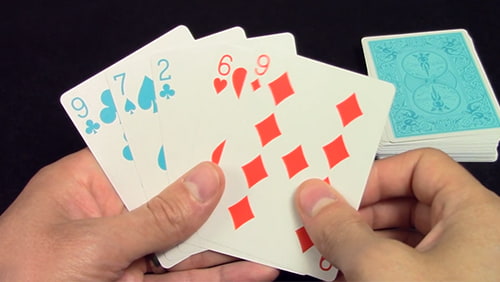 There are a number of card games from which the game of poker was derived or has been heavily influenced by. Cribbage, while it can teach you a lot of skills that help you when playing poker, is not one of them.

The game of cribbage was created by the English poet Sir John Suckling in the early 17th century, and itself was spawned as a variant of the game ‘noddy’, which would eventually slip into the archives to be replaced by the stronger branch that sprouted from its original tree. Think of cribbage as Frasier to noddy being Cheers.

The skills you can obtain by playing ‘crib’ can help you at the poker table, but how? Let’s first learn how to play the game of cribbage.

How to Play Cribbage

Playing cribbage may sound like it’s complicated, but actually it is one of the most intuitive card games ever invented and once you’ve learned what to do, it’s really easy to remember all the rules. It’s the ‘riding a bike’ of card games, and once crib players learn and enjoy the game, they often play it for the rest of their lives.

While you can play with three or even four players, the best version of the game is the two-player one and that’s what we’ll stick to. There’s a point to doing so, too, as poker’s heads-up battle that ends all t0urnaments or short-handed cash game tables, or even a large proportion of poker hands where the action is between two players alone, are all heavily linked to cribbage play.

The aim of the game is to score 121 points, or two circuits of the cribbage table, which you’ll need with a standard pack of 52 cards to begin the game. You’ll also need markers to track your progress around the crib ‘board’, and you do so by taking the back marker and overtaking the front marker with it by the requisite number of points that you’re scoring. That way, should you drop your marker, the other one – the marker that reflects your current score – is still in the board and can be counted from.

Each player cuts for the first deal, which can be important between close players, as 121 points isn’t much to have to score, so games typically last between 15-20 minutes, although a really low-scoring one might last half an hour if you’re teaching someone the game and taking it slowly. If the person turning up the top card picks a jack, they score two points off the bat.

Each player is dealt six cards, after the receiver cuts the deck, and of these six cards, each player decided which four to keep in their hand and which two to discard into the ‘box’, a four-card second ‘hand’ which the dealer will get to declare a little later on.

Players then start the game.

Each player plays a card and there are various ways to score points by playing the next card in sequence, right up to a total of 31 points (pictures count as ten, an ace counts only as one).

How to Win at Cribbage… and Poker

There are many ways of scoring at cribbage and while we’ll talk about the way those scoring methods tally with some of the ways you can win at poker, we could easily fill a small novel with methods. Instead, you can watch a short guide on how to play the popular game of cribbage right here:

Knowing the likelihood of what cards your opponent is holding down to the actions they make is a huge crossover with poker, and in cribbage, it’s vital. Players often hold onto cards they can make runs with, and a common cribbage mantra is to ‘never break a run, never never break a double-run’. A double-run of say, 6-7-7-8 is highly likely to improve with the turn-up, which is cut after the initial deal of the cards.

Therefore, if you play a two and someone lays a seven down – announcing ‘nine’ as is polite to do so throughout the playing part of the game, what else could they have in their hand? Well, an eight would make a fifteen, so is likely, as is another seven for a paired card. A six would be highly possible too, as it amounts to part of a run and if their first two cards they play are, say, a six and a seven, you can start laying picture cards without worrying about being paired and giving away two points.

Building up a picture of your opponent’s hand while playing the cards will allow you to score plenty of points during this period of the game, and it’s a little like the betting streets in poker. You’re trying to establish an early range of cards for your opponent. Say, you notice that they often play middle suited connectors such as a six and seven. If the flop then brings cards such as five, eight or nine, you need to react to the possibility that the board is helping their hand by restricting your betting style. If you’ve pegged your cribbage opponent as holding 6-7 and associated cards start worrying you, you might need to play defensively or change how you look at your own card during the playing phase.

This should impact how you throw out cards to the ‘box’, too. If it’s your box, then you want cards in there that are helpful to scoring. The opposite is true of course if you’re throwing out into your opponent’s box.

Cribbage, like poker, is a game where you must adapt very quickly to make the most of each situation. In poker, that can be across flop, turn and river as you try to win each pot. In cribbage, it’s about amounting as many points as you can each hand, whilst simultaneously trying to break the scoring potential of your opponent’s holdings.

The similarities between the games of cribbage and poker are many, but there are just as many differences too. As well as learning a completely new game if you choose to play it, you’ll also increase your ability to adapt during gameplay – something poker players at the very highest level credit as being crucial to success.

Enjoy cribbage as the newest card game you play and one of the oldest games in history could be of huge benefit to you I the very modern world of competitive poker.