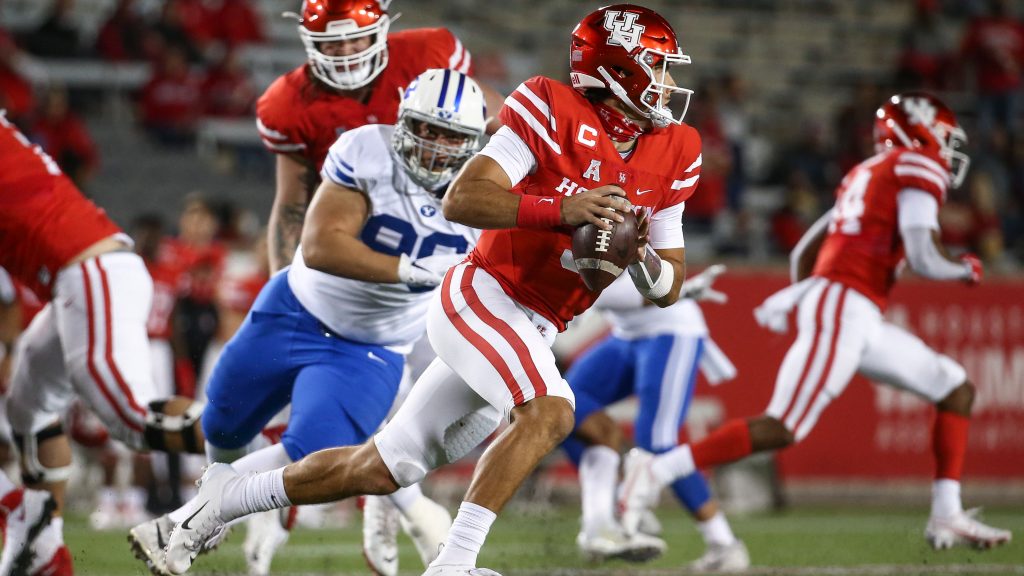 The Houston Cougars (1-1, 1-0 AAC) and Navy Midshipmen (3-2, 3-0) clash in a Saturday American Athletic Conference battle at Navy-Marine Corps Memorial Stadium in Annapolis, Md, at 3:30 p.m. ET. We analyze the Houston-Navy college football betting odds and lines, with picks and predictions.

The last two games in this series have been shootouts with each side winning one apiece. The Midshipmen defeated the Cougars 56-41 last year in Texas. In 2018, Houston topped Navy 49-36 in Maryland. Both games featured both teams compiling 500-plus yards of total offense.
Navy is 3-0 in league play after defeating Tulane, Temple and East Carolina All three of those games were decided by four points or less. Dating to 2019, the Middies have won nine straight in AAC play; five of those games were decided by one score.
Navy’s run defense has been pillaged for 273.8 yards per game (76th FBS) on the strength of 6.1 yards per carry. Opponents have tallied 17 ground scores in five games. Albeit in just two games, the Houston defense is at the other end of the spectrum: The Cougars yielded 70 rushing yards in their first game (Tulane) and 78 in their second (BYU).

Get some action on this game or any other matchup with a legal, online bet at BetMGM in CO, IN, NJ and WV. Risk-free first bet up to $500, paid in free bets. Terms and conditions apply. Bet now!

PASS as there’s too much juice cutting in on value potential.

Against the Spread (ATS)

Navy QB Dalen Morris (concussion) is questionable, and backup QB Tyger Goslin doesn’t have much game experience. Houston was a minus-five in the turnover exchange in last year’s loss to Navy. That setback was part of a 1-4 stretch to end the season. But this season’s early returns have been promising. The Cougars lost to ranked BYU 43-26 on Oct. 16 after leading 26-14 late in the third quarter. BYU scored the final four TDs; two were in the last four minutes, and two were on drives of less-than-25 yards.

This total has dropped multiple points since it was first posted. A 30% chance of rain is in the Annapolis forecast. This total is worth a LINE WATCH: a drop to 53 or 53.5 would make for an OVER play.

Want some action in this one? Place a bet at BetMGM now. For more sports betting picks and tips, visit SportsbookWire.com. Please gamble responsibly.