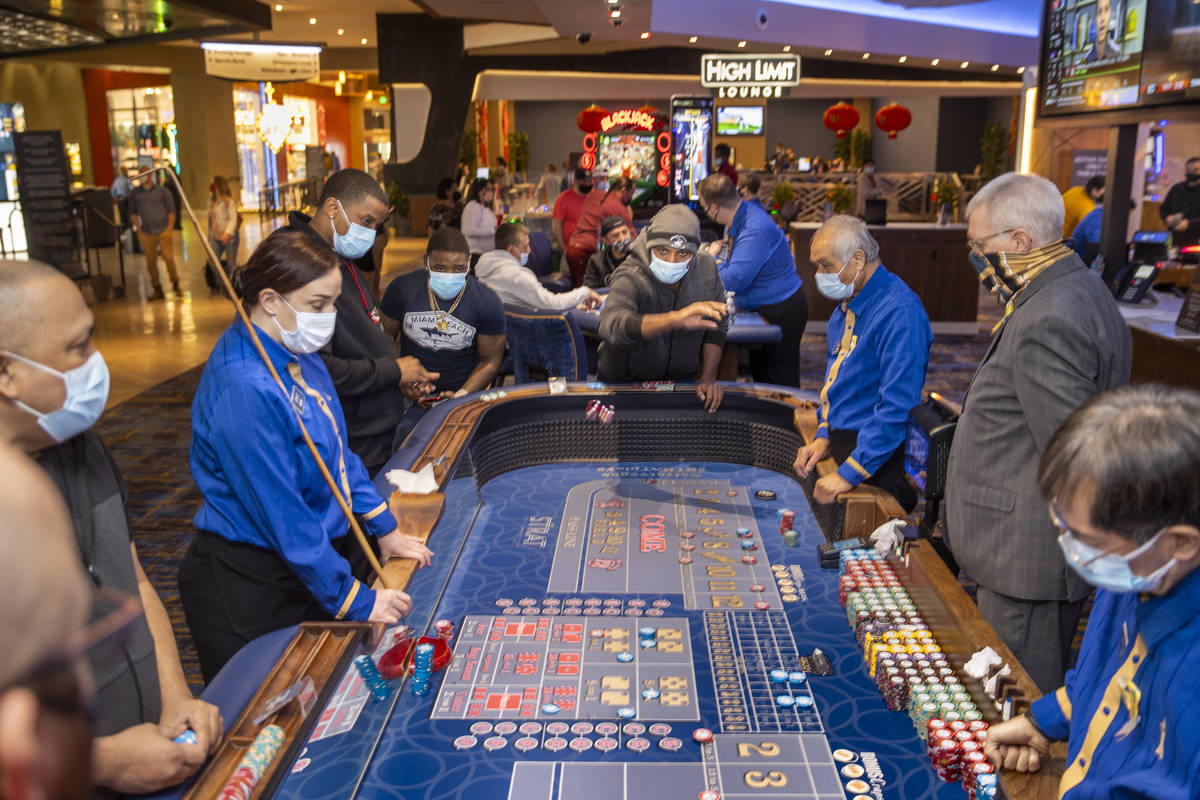 Businesses across the Las Vegas Valley received the green light to loosen their operating restrictions on Monday, with many allowed to surpass 25 percent capacity for the first time since November.

Industry watchers consider the boost to a 35 percent capacity limit a step in the right direction, but so far companies say its impact on business has been nominal. Spokespeople for gyms and casinos say they look forward to next month, when the state will usher in a 50 percent capacity limit to more businesses.

“While we expect to see some increases, the 50 percent occupancy cap will have a much more significant impact on our business property-wide,” Westgate spokesman Gordon Prouty said.

The updated capacity limits are part of Gov. Steve Sisolak’s new plan to ease restrictions if current declining COVID-19 infection trends continue. The state’s test positivity rate has been declining since peaking above 21 mid-January, and hit 12.8 percent on Monday.

You wouldn’t be able to tell the state had eased restrictions just by looking at the Westgate’s casino floor on Monday, Prouty said.

“We are not seeing a noticeable difference,” he said.

The ability to expand to 35 percent capacity doesn’t mean casino floors will automatically increase their visitor volumes. Nearly a year after the onset of the pandemic, the city continues to struggle with low visitor volumes.

Foot traffic on the Strip in January was down 68 percent on a year-over-year basis, according to data cited in a report published this month from financial services company Jefferies. The downtown and locals market were down 60 percent and 53 percent, respectively.

A boost in traffic could come, however, as vaccines continue to roll out, travelers with pent-up demand regain confidence to venture outside their homes and Nevada casino floors gain permission to allow even more patrons. Under the latest state guidelines unveiled Thursday, casino floors and other businesses will be able to move to 50 percent capacity on March 15.

Until then, Prouty said, business at the Westgate’s restaurants will probably see the biggest tailwinds because they can now seat six at a table, compared with the previous restriction’s max of four.

“Edge Steakhouse, Fresco Italiano and Benihana have been regularly booked to capacity, so the increase should be immediate there,” Prouty said.

Stephen Thayer, The Strat’s vice president and general manager, said he looks forward to returning the property to 50 percent capacity.

“(We) will continue to adjust accordingly in order to provide a safe and healthy environment for our guests,” he said.

An MGM Resorts International spokeswoman said the company is optimistic for the city’s recovery.

“Las Vegas remains an incomparable travel destination,” spokeswoman Callie Driehorst said. “We’re excited to take each step toward normalcy and will continue keeping the health and safety of guests and employees as our top priority. We look forward to continuing to safely expand our offerings, welcome more guests and help our community and economy bounce back.”

A spokesperson for EOS said the company, which runs 11 gyms in Nevada, is “thrilled” with the capacity limit increase. As of Monday, it had increased its member capacity in its Nevada gyms to 35 percent, opened locker rooms at 50 percent capacity and made its showers available for use.

This “not only means more of our members can join us to workout in the gym, but also that the state of Nevada is making positive progress in our collective fight against COVID-19,” the spokesperson said.

A spokeswoman for Planet Fitness said the company was looking forward to accommodating more members at one time in its Nevada fitness centers.

“We believe fitness is essential to your mental and physical health, and we look forward to continuing to provide our members with a safe, clean, and spacious environment,” spokeswoman Becky Zirlen said.

A Las Vegas Athletic Clubs spokeswoman said the company is pleased the state is on the road to recovery but noted that capacity limits have yet to impact business volumes inside its large facilities.

Spokeswoman Emily Hamill said the company is confident that, once allowed, it will be able to safely accommodate 50 percent capacity today with adequate social distancing because of the size of its gyms.

What would make a difference going forward is loosened mask restrictions “when the time is right,” she said, because face coverings have been uncomfortable for some members during intense workouts.

A number of companies — including MGM — have said they’ll be able to rehire workers once operating restrictions are lifted.

“As the business begins to recover and operating restrictions abate, we expect to continue remobilizing our fantastic teams, rehiring and retraining them in order to serve our guests,” MGM CEO Bill Hornbuckle said on an earning call last week. “Over the course of this year, we will do the same with our industry-leading entertainers across all of our properties.”

But Monday’s move failed to move the needle enough in the right direction for many companies looking to bring back workers, according to state director of the National Federation of Independent Business.

“The increase is not enough for many small businesses, especially local restaurants, to be able to hire some of the thousands of Nevadans who have been out of work for almost a year,” said Randi Thompson, NFIB’s Nevada director. “Waiting another month to get to 50 percent will only keep more Nevadans from getting back to work.”

J. Barry Vaughn, a rector at the Christ Church Episcopal, says increasing capacity limits for places of worship is welcome news, but it won’t change much at his church. Vaughn said that’s because the Episcopal Diocese of Nevada, which is the church’s governing body, sets the rules.

“The diocese has imposed additional restrictions on us over and above the governor’s restrictions, and right now, they do not even allow us to use our buildings,” Vaughn told the Review-Journal on Monday. “I think that we probably get more people if the diocese would let us move inside but they haven’t done that yet.”

The Las Vegas church continues its Sunday services at 11 a.m. by holding sermons at its courtyard that can seat upward of 300 people. Vaughn says he sees between 30 and 50 people show up on Sundays, whereas pre-pandemic, the church would get between 100 to 150 people at its two services.

“The governor’s order is great and I support it, but unfortunately, it doesn’t help me out,” Vaughn said, adding that the majority of his congregation are people over the age of 60.

“On the other hand, I would strongly urge my older folks, especially people over 70, to not come out until they get vaccinated, but from what I’ve observed, most of them are getting vaccinated,” he said.

Vaughn said the lawyer for the diocese recently told the church that as COVID cases improve across Nevada, indoor services could come as early as Easter, “but that’s no guarantee, so we’re just limited right now to outdoors.”

The Review-Journal is owned by the family of Sheldon Adelson, the late CEO and chairman of Las Vegas Sands Corp.