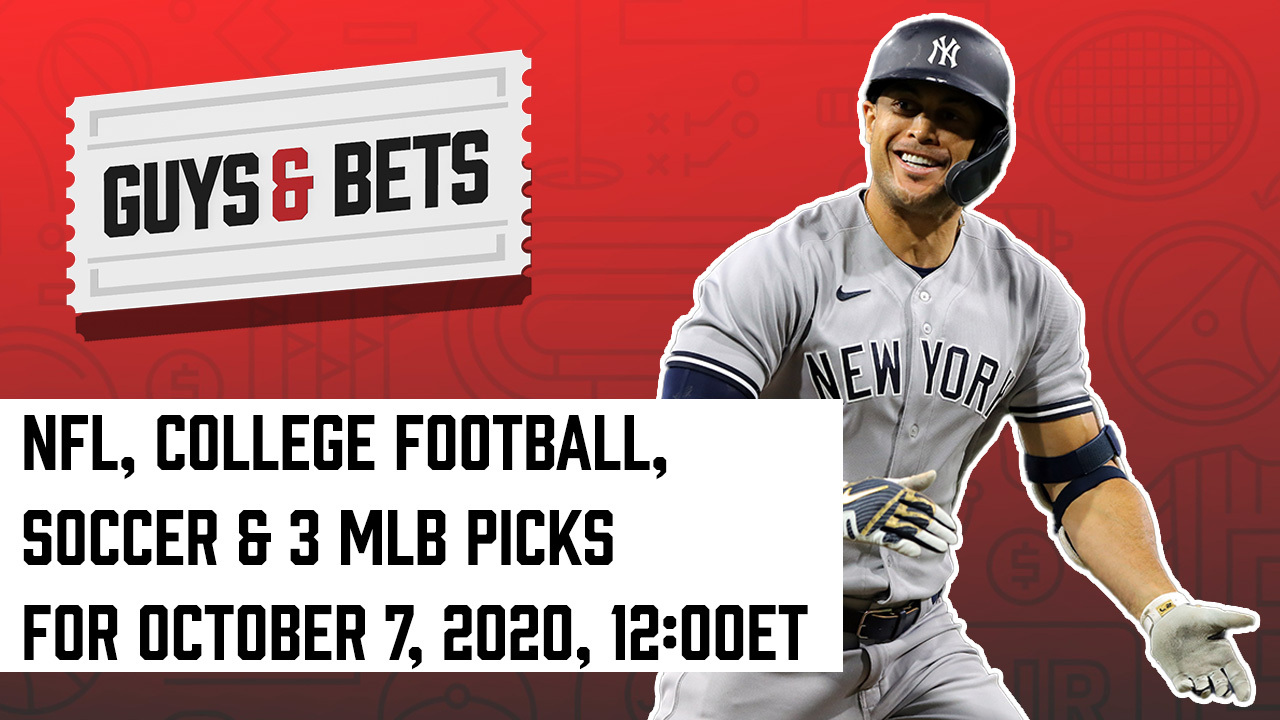 Sure feels like a sports buffet these days with everything happening all at once and that means that are more opportunities to lay down some money.

Joe Osborne, Andrew “Ninja” Avery and Pamela Maldonado have their best bets picked out for today’s MLB action, along with an NFL Thursday Night Football bet, college football and even a little Euro qualifier action.

Joe leads off with the first of three MLB bets on the show today. The Houston Astros have a 2-0 series lead over the Oakland Athletics as Jose Urquidy takes the mound for Houston and Jesus Luzardo for Oakland. The starting pitchers are a major factor in Joe’s capping on this game. One has been really good in the postseason and the other has struggled.

For his next bet, Joe is looking at the other AL Division Series between the New York Yankees and the Tampa Bay Rays. Safe to say that Giancarlo Stanton is healthy after crushing a couple of moon shots to start the series. Game 2 saw six combined homers as the Rays evened the series at one game apiece. Joe’s looking at a moneyline bet here.

Thursday Night Football is just one night away and this week it’s Tom Brady and the Tampa Bay Buccaneers in the Windy City to face Nick Foles and the Chicago Bears. Now we all remember what happened the last time these two QBs faced off as the Philadelphia Eagles won the Super Bowl. The Bucs are fresh off a big comeback win against the Chargers as Brady dished out five touchdown passes. The Bears are struggling to score as Foles gets acclimated to the offense and who knows what the swirling winds at Soldier Field will have to say about this game.

Ninja has an MLB bet for Game 2 in the NLDS as the Miami Marlins try to even their series against the Atlanta Braves. The Braves won the opener 9-5 thanks in large part to a six-run seventh inning. Ronald Acuna Jr., 22, became the youngest player to hit a leadoff home run in the postseason with his first-inning jack. But it was Travis d’Arnaud who hit a go-ahead three-run homer in the seventh that really broke the Marlins. Ninja’s bet for this one is on the total as the Marlins trot out Pablo Lopez on the hill against the Braves’ Ian Anderson.

Ninja has found a nice spot for a plus-money bet in the Euro 2020 qualifiers. After tearing up the Bundesliga, Erling Haaland is looking to do the same for Norway at home against Serbia. This is another step in the right direction for Serbia as they haven’t played at a Euro for 20 years but will no doubt have their hands full against a talented Norwegian squad. Norway is undefeated in its last three games, notching two wins and a draw.

Pamela Maldonado has a bet for this weekend’s college football game in Chapel Hill, North Carolina, as the 19th-ranked Virginia Tech Hokies take on the eighth-ranked North Carolina Tar Heels. This one could very well come down to how well the Hokies can run the ball. The Tar Heels have been limiting their opposition this season when it comes to the rushing attack, and they will have their hands full with Khalil Herbert. Herbert is fresh off a school-record 358 all-purpose yards last week at Duke.