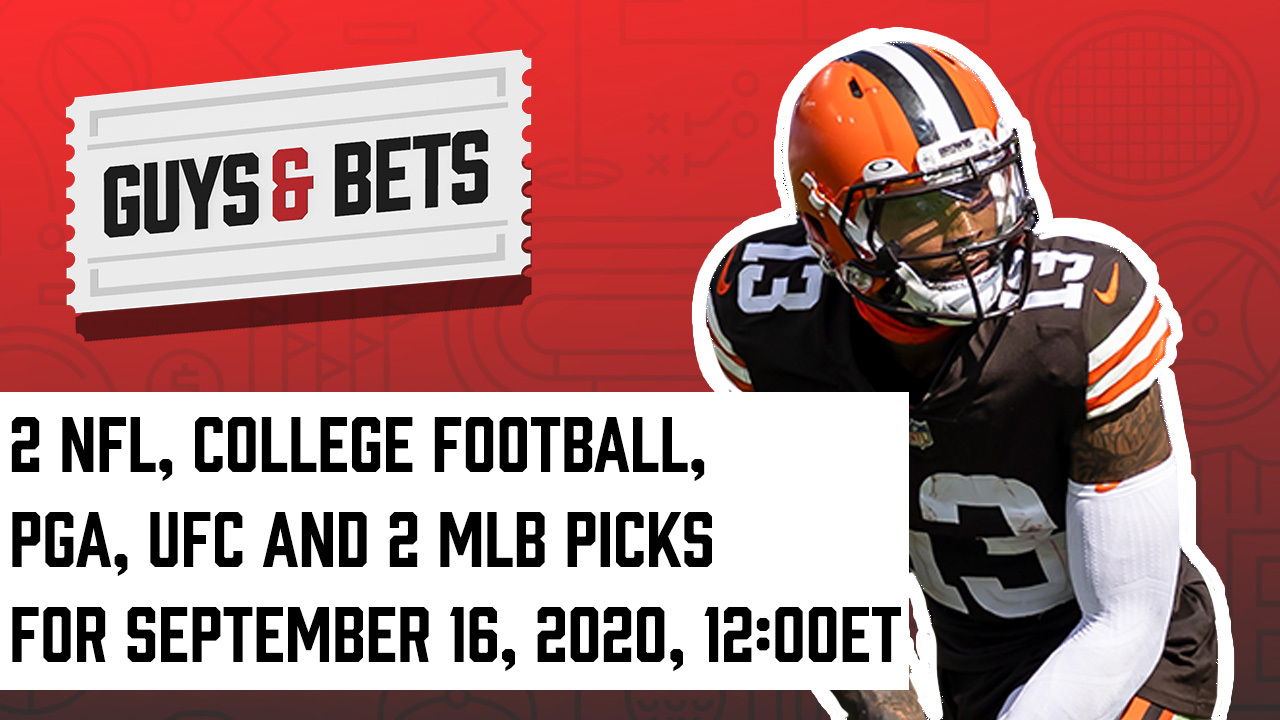 It’s Wednesday and we have ALL the sports happening, so Joe Osborne, Iain MacMillan and Pamela Maldonado have got all your betting action covered. With five different sports to choose from, there is something for everyone on today’s show. Joe has an NFL, MLB and UFC play, Iain is looking at NFL, MLB and the PGA as the U.S. Open starts tomorrow and Pam is back with the guys and she has a couple of college football plays. Let’s get into it.

We start with the Thursday Night Football game as the Cleveland Browns host the Cincinnati Bengals. Joe is looking at the spread and likes a side on it. After getting gouged on the ground in the opening week, the Bengals could be in for more trouble against Nick Chubb and Kareem Hunt. The dynamic backfield duo had their struggles in Week 1 against Baltimore, but the Bengals could be just what they need to get straightened out. It’s also a chance for Baker Mayfield to put on a show in front of a national audience to silence some of his critics.

Joe is looking at MLB for a bet as the New York Mets are in Philadelphia to take on the Phillies. Jacob deGrom takes the hill for the Mets with a sparkling 1.67 ERA. Zack Wheeler, his counterpart, sports a 2.47 ERA. The Phillies have struggled this season as an underdog, going 6-10 in those games. It doesn’t look like a game where there will be a lot of runs, but if the Mets can shake Wheeler, Joe has some great info on why they could go on to win.

With a solid UFC card this Saturday from the UFC Apex facility in Las Vegas, Joe has a bet for the Main Event. Colby Covington squares off with Tyron Woodley in a welterweight bout. Covington comes in averaging 5.69 takedowns per 15 minutes, while Woodley’s takedown defense is 90 percent. Both of these fighters have a history of long bouts, with each fighter averaging over 13 minutes per bout. That, among other factors, is why Joe is picking one of these guys to win.

Iain has a play for the Thursday night game as well, but he is looking at the total, which sits at 43.5. Joe Burrow makes his prime-time debut after a disappointing finish in their Week 1 game against the Chargers. The Bengals didn’t look good against the run to start the season and that doesn’t bode well for them considering the Browns’ rushing attack. This is a good spot for Baker Mayfield and the rest of the Browns’ passing game to show up and make an impact in prime time.

Next up for Iain is his underdog pick. Cole Hamels makes his season debut as he takes the mound at home for the Atlanta Braves with the Baltimore Orioles coming to town. The Orioles were at one point the darlings of MLB this season, but they have fallen on hard times since then. They did take the first game of this three-game series, with the Braves taking Game 2. “Underdog Iain” likes a plus-money bet on the Orioles, but you’ll have to watch to see why.

Iain’s last pick is for the U.S. Open, which tees off tomorrow. Yes, that sounds weird, but it’s 2020. The U.S. Open returns to Winged Foot for the first time since 2006. That was when Phil Mickelson blew his best chance to win the tournament. But Iain isn’t picking a tournament winner here. Instead he’s looking at a head-to head matchup between Daniel Berger and Patrick Cantlay. This is one of the many betting options you have for golf; it’s more than just the tourney winner.

We switch gears and head to the ACC as Pam has a bet as No. 25 Pittsburgh is home against Syracuse. The Panthers, backed by one of the best defenses in the country and a ground game that stacks up very well, are huge favorites in this one. Syracuse is fresh off a 31-6 loss to 16th-ranked North Carolina and has a huge hill to climb. Pitt senior quarterback Kenny Pickett is just 147 yards shy of 6,000 passing yards for his career. He would become the seventh player in school history to reach that mark. Pitt has covered in seven of its last 10 games, while Syracuse has only covered in two of its last 10. Pam is looking at a play on the spread for this game.

Next for Pam is a game between the Houston Cougars and the Baylor Bears. Houston will make its season debut after having its two previous games (vs Rice and vs Memphis) postponed. Clayton Tune returns at quarterback for the Cougars and so do his top two weapons, wideouts Marquez Stevenson and Jeremy Singleton. Charlie Brewer returns at quarterback for the Bears, but his top receiver from a year ago, Denzel Mims, has moved on to the New York Jets. He does have Tyquan Thornton and R.J. Sneed at wideout, and that duo combined for over 1,200 yards and eight touchdowns a season ago. Once again Pam is looking to the spread for her bet.