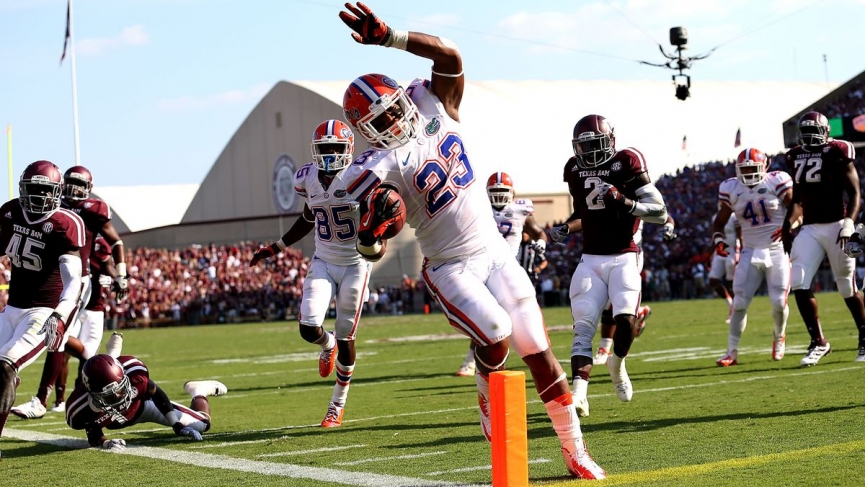 The number 4 ranked Florida Gators will travel to College Station TX to take on the Aggies in a huge matchup of ranked teams in the SEC conference. The Gators are 2-0 overall, 2-0 in the SEC conference, and are favored by +6.5 points in this game with a posted total of 57 points. The Aggies are (1-1 overall and SEC) And we’ll have to play very well to upset an especially strong Florida Gators team.

What Does the Betting Flows Tell Us?

The betting line for this game opened at -7 points and quickly dropped to -6.5. Currently, in this match, 79% of the tickets are on the Gators, however, 78% of the total money is on the Aggies. The fact that most of the money is on so few tickets that are betting on the Aggies is indicative of the professional large-sized bettor getting on Texas A&M and looking for a much closer game between these two conference foes.

The betting flows in the total don’t reveal many directions toward an ‘OVER’ or ‘UNDER’ bet. However, of the bets being placed 82% of the bets are going on the ‘OVER’ and accounts for is 59% of the total money bet. The fact that there are more tickets at 82% versus 59% of the money shows that the bigger size bets are favoring the ‘UNDER’.

Ranked Teams Coming Off a Loss

This betting system has earned a 138-83 against-the-spread (ATS) record over the last 10 seasons and serves the active bettor well. It has produced a profit of $4,300 for the $100 bettor for a 19% return on investment (ROI). This betting system has four parameters that work together to produce consistent returns over the past 10 seasons. The requirements are to bet against teams in the regular or postseason that were a bowl or playoff team from last year and are coming off a loss of 14 to 31 points as a ranked team.

The Aggies are coming off a loss as a ranked team to No 2 Alabama by the final score of 52-24 losing by 28 points and failing to cover the spread as 18-point road underdogs. The loss did not cause the Aggies much damage in the rankings this week as they find themselves positioned at No 14.

This awesome money line betting system has earned an outstanding 56-34 ATS record for 62% winning bets spanning the last 10 seasons and has made the $100 bettor a profit of $4,900. The requirements of this money line system are to bet on a home team using the money line off a blowout loss by 21 or more points to a conference rival that has five or more defensive returning starters than the current opponent.

The machine learning models project that the Gators will score 28 or more points and average at least nine yards-per-pass attempt. In past games in which the Gators met or exceeded these performance measures has seen them go on to earn a 40-1 SU record for 98% wins and a 32-5-2 ATS mark good for 87% winning bets that have covered by an average of 10.4 points.

When the Aggies have played games in which they allowed 28 or more points and more than 9 yards per pass attempt they have gone onto a miserable 5-27 SU record for 16% wins and 7-23-2 ATS record for 23% winning bets. The pick: Florida Gators minus the points as a road favorite.