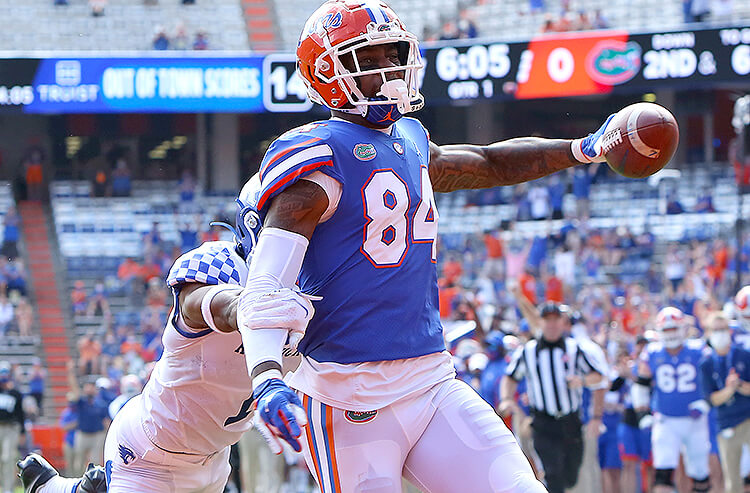 The Florida Gators have their sights set on the SEC Championship Game (if there is one) for the first time since 2016, but before that is their final regular-season test when they visit the Tennessee Volunteers.

Quarterback Kyle Trask will also attempt to put the final touches on his Heisman Trophy resume in a game where the Gators are 17.5-point college football betting favorites.

Here are our best college football free picks and predictions for No. 6 Florida at Tennessee, with kickoff scheduled to get underway on Saturday, December 5 at 3:30 p.m. at Neyland Stadium in Knoxville.

It’s looking like it will be a dreary December afternoon in Knoxville. The forecast is calling for showers in the morning, but they should taper off before noon. Game time will see cloudy skies and temperatures in the mid-40s. Be sure to monitor the gametime conditions with our NCAA football weather info.

The trends are in the Gators’ favor in this one: Florida is 5-1 ATS in its last six trips to Tennessee and the road team is 8-3-1 ATS in the last 12 meetings. Find more NCAA betting trends for Florida vs. Tennessee.

Against the Spread (ATS) Pick

Florida comes into this game a winner of five straight and 7-1 on the season, with the lone loss coming on the road against a very good Texas A&M defense, and this version of the Gators is without a doubt led by their offense.

QB Kyle Trask is one of the favorites to win the Heisman Trophy. The senior signal-caller has completed 71.8 percent of his passes for 2,810 yards with an eye-popping 34 touchdowns compared to just three interceptions.

Trask was also happy to get his best weapon back last week in TE Kyle Pitts. Pitts returned from a concussion, which forced him to miss two games, and promptly hauled in five catches for 99 yards and three scores. The Gators also get enough out of the run game that you have to respect it, as Dameon Pierce averages 5.2 yards per carry.

Trask is set up to have a field day against a Tennessee team that has dropped five in a row SU and ATS. The Volunteers rank 79th in pass defense, allowing 243.6 passing yards per game, and rank 120th in opponent completion percentage (67.5).

But the biggest problem for Tennessee has been an offense that hasn’t been able to generate anything during this skid. The Vols are averaging just 15 points over the last five games and rank 106th in total offense for the season. And now, they might make a switch at QB as Jarrett Guarantano has struggled mightily, throwing for just 1,112 yards with six touchdowns – and four interceptions – in seven games.

It’s just hard to envision them keeping up with the Gators in this one.

Florida is second in the SEC, and 10th in the country, in scoring at 43.4 points per game. And while it was mentioned that Tennessee has had an aversion to offense, particularly over the last five weeks, this total of 61.5 might be a touch low.

First, Tennessee has averaged just 15 points per game over the last five games but, to be fair, they’ve played some of the better defenses in the conference including Alabama, Kentucky and Georgia.

Second, 15 points might be enough to send this one Over anyway. But whether it’s Guarantano under center or possibly Harrison Bailey, the Vols could play better against a Florida defense that has struggled at times this season, ranking 78th against the pass and allowing 25.9 points per game.

Either way, the Gators should not have any trouble putting up points in this one and while the Vols have struggled, 15 to 20 points should be enough to get this one Over.

The Gators’ offense certainly has had some bite in the early part of games. Florida ranks eighth in the nation when it comes to first-half scoring, putting up 24.6 points per contest. Meanwhile, Tennessee is averaging just 13.7 first-half points per game, so getting this number below 10 seems like good value.

Did you know that if you parlayed today’s NCAA Florida vs. Tennessee picks, you could win $56.82 on a $10 bet?

Use our NCAA parlay calculator to create your own parlays and see their potential payouts.

Where Can I Bet on College Football?