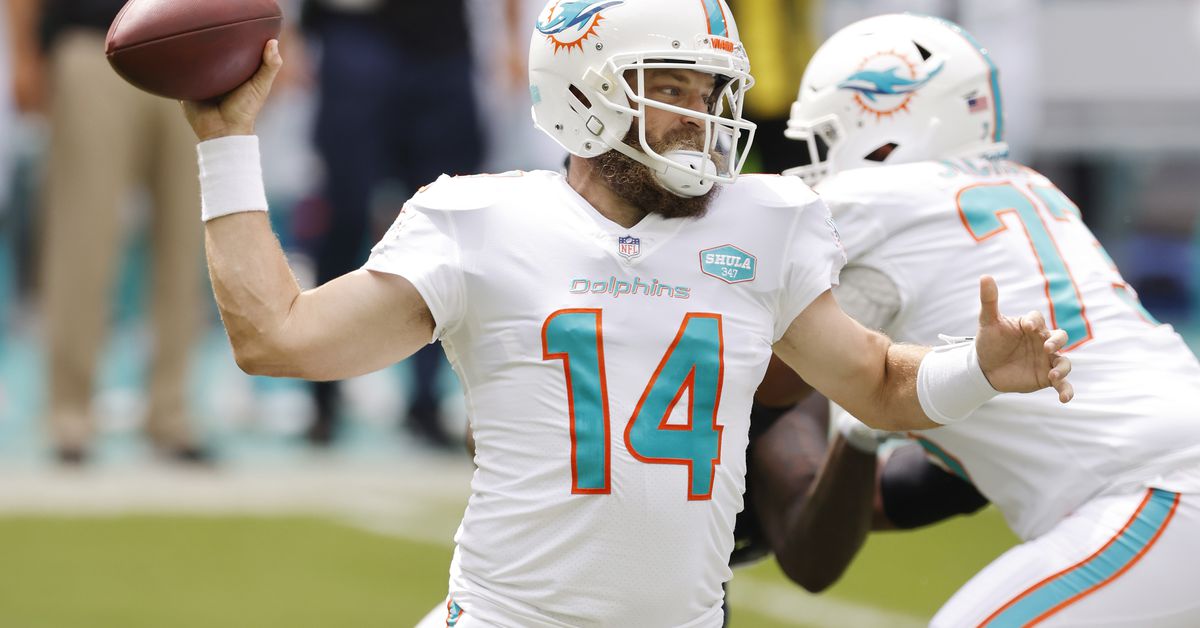 Welcome to Week 6 of the fantasy football season. First, I’ll give you my favorite DK individual plays at each position. Then I’ll go through the relevant injuries for this week. And I’ll wrap it all up with my favorite wagers for this Sunday.

I’ll also be answering start/sit questions in our War Room starting two hours before early game kickoffs. Do give a click if you’re reading this between 11 am – 1pm EST Sunday morningish.

The Colts have initial positives Friday morning so will shut down operations. Their game with the Bengals is up in the air as of Friday morning.

The Falcons returned to practice today and appear to be back on track to play the Vikings this weekend.

Ryan Fitzpatrick, $5,900 — Fitz takes on one of his many old teams this weekend and they also happen to rank 31st in DVOA against the pass. They rank 22nd in fantasy points allowed to quarterbacks, and have given up big points to Josh Allen and Kyler Murray and before Jimmy Garoppolo left their game, he had complete 14-of-16 passes for 131 yards and two touchdowns. And ol’ Fitzmagic has now topped 25 DK points in his last four games.

Kirk Cousins, $6,100 — Cousins doesn’t have a lot of upside in a run-heavy offense, but the Falcons have been so bad against the pass, you have to consider him. They’ve given up by far the most fantasy points to quarterbacks and rank 30th in DVOA against the pass.

Matthew Stafford, $6,300 — The Jaguars are dead last in DVOA against the pass while ranking fifth-worst in DK points allowed to quarterbacks. Stafford had his best game his last time out, as he finally got Kenny Golladay back, and now he’s coming off a bye with his team fully rested in a great matchup.

Jonathan Taylor, $6,400 — The Bengals have allowed the fourth-most rushing yards and third-most yards per carry to running backs this season. Taylor hasn’t been getting the snaps I’d like, but this game sets up well for him, as the Colts can’t rely on Philip Rivers to get the job done. Instead, they will look to their defense and the running game to grind out a win.

David Montgomery, $5,800 — The Panthers have been punished by Josh Jacobs, Leonard Fournette, Austin Ekeler, and Todd Gurley, with only Kenyan Drake being unable to put up big numbers against them. Montgomery hasn’t shown us much in his short career, but with Tarik Cohen out, his target share has shot up and in this matchup, he’s going to find some room to put up fantasy numbers.

Mike Davis, $7,000 — The Bears have a better pass rush than run-stopping unit and have allowed over 100 yards rushing per game at a 4.55 yards per carry clip. And with the targets and overall usage Mike Davis has seen, his floor is extremely high, even in tougher matchups. He’s averaging 22.3 touches per game over his last three, which is hard to find at even his 7k price.

Ronald Jones, $6,000 —The Packers have allowed the second-most DK points per game to running backs this season while Jones has looked good of late. I hadn’t been on the Jones bandwagon, but he has looked excellent in his last two games against the Chargers and Bears, topping 100 yards rushing. This week he gets an easier matchup and even if Fournette is back, Jones has won himself plenty of touches.

Adam Thielen, $7,200 — There aren’t many cheap options this week, especially at wide receiver, so I will be paying down at quarterback, tight end and defense to try to fit in my running backs and receivers. That leads me to Thielen, who will be chalky, but for good reason, as he’s been a target hog, great producer of fantasy points and faces one of the worst pass defenses in the league.

Kenny Golladay, $6,200 — Golladay at this price is hard to pass up. Brandin Cooks just went for eight receptions, 161 yards and a touchdown against this pass defense. The Jags rank 32nd in DVOA against the pass and Golladay had the bye week to get his hamstring 100 percent.

DeVante Parker/Preston Williams, $6,300/$4,700 — In the last two weeks the Jets were smoked by DeAndre Hopkins and Tim Patrick, while John Brown, Stefon Diggs and Jerry Jeudy all had strong games against them. Parker is the safer play in this strong matchup, but Williams showed enough last week to feel good about him moving forward. And I like the Fitzpatrick stack. Fitzstacktrick.

T.J. Hockenson, $5,300 — Jacksonville has allowed just 22 receptions to tight ends, but the seventh-most fantasy points to the position. They haven’t faced many strong tight ends either, but Mike Gesicki and Jonnu Smith have been the best and they put up three touchdowns against them. I don’t think I’ll be able to pay up for Hockenson, but if I can, he’s high on my list.

Trey Burton, $3,100 — As I said, I’m going to try to find a cheapish tight end for this week and Burton fits the mold. He’s seen 11 targets in his last two games since returning from I.R. and Mo Alie-Cox doesn’t look like he’ll be healthy for this game against the Bengals. Cincinnati has only given up one touchdown to a tight end, but they’ve allowed positive games to Hunter Henry, Mark Andrews and Zach Ertz, who has looked bad this season, but had seven receptions for 70 yards against the Bengals.

Irv Smith Jr., $2,500 — This matchup is too good to not at least mention, as the Falcons have allowed tight ends to catch 33-of-40 passes for 336 yards and seven touchdowns this season. The bulk of those numbers have come from Greg Olsen, Dalton Schultz, Jimmy Graham, and Big Bob Tonyan. Next up is Irv Smith Jr., who had barely been used until last week when he caught 4-of-5 targets for 64 yards. If he wasn’t such a good prospect, I wouldn’t recommend him, but he is a player who I’ve wanted to see get more work due to his ability and that might be happening at just the right time.

Dolphins, $2,500 — Joe Flacco gets another start this week and he completed 54 percent of his passes for 195 yards and a touchdown against a bad Cardinals pass defense, leading his team to 10 points. The Dolphins just manhandled the 49ers and have shown that their young defense has some playmakers.

Bengals, $2,100 — If they can get Geno Atkins back for this game, it would help, but in the end, Philip Rivers has looked bad. The Bengals aren’t a good defense, but if they can force Rivers to throw the ball, they have a good shot at turnovers.

Jimmy Garoppolo practiced in full this week and should start again this week against the Rams tough pass rush.

Drew Lock is poised to return this week against the Patriots. He’s not a suggested start, but he should give his receivers a bit more consistency this week.

Kyle Allen will get the start again this week. I’d rather have Dwayne Haskins throwing to Terry McLaurin, but Allen was able to keep D.J. Moore as a fantasy star last season, so maybe he can help McLaurin.

Sam Darnold is out and Joe Flacco will take over against the Dolphins. Expect check downs.

Cam Newton returned from IR and will start this week against the Broncos. His rushing ability always keeps him in the Top-10 fantasy QB picture.

Baker Mayfield will likely play this week with sore ribs, but they could slow him down against a tough Steelers pass rush.

Dalvin Cook is more than likely out this week, giving Alexander the start and a big workload against the Falcons. Start him.

Phillip Lindsay will return against the Patriots this week. His presence will hurt Melvin Gordon’s touches, if he is playing. Gordon could be disciplined for his DUI by the team, but it sounds like they may defer to the league’s discipline.

Zach Moss looked ready to return on Tuesday against the Titans, but he sat out again. He appears to be very close to returning against the Chiefs, which would hurt Devin Singletary’s upside.

Chris Godwin has been limited in practice. A full practice on Friday would be a good sign of him returning, but we’ll have to wait to see at this point.

Mike Evans was limited on Thursday and should be able to play this week against the Packers.

Julio Jones has yet to practice. He’ll need to practice Friday to have a shot at starting on my fake teams.

Alshon Jeffery and DeSean Jackson have both been limited in practice and their status remains up in the air. Right now, Travis Fulgham appears to be the No. 1 receiver heading into this week.

Diontae Johnson was limited in practice Thursday. He seems likely to suit up against the Browns, but it would be good to see him get a full practice in on Friday.

D.J. Chark hasn’t practiced yet this week with an ankle injury. We’ll need to see if he can go on Friday before penciling him in against the Lions.

Odell Beckham Jr. was sent home with an illness on Thursday. As long as he continues to test negative for Covid-19, he should be fine to face the Steelers.

John Brown missed last week with a calf injury, but got a full practice in on Thursday, so should be available against the Chiefs. His presence would be a boost for Josh Allen.

Jordan Akins has been limited in practice this week. If he can get a full practice in Friday, he has some appeal during the bye week.

Noah Fant continues to get limited practices in this week. If he can suit up against the Patriots he is startable at a weak position.

Mo-Alie Cox hasn’t practiced yet this week. If he can’t go with his knee injury, Trey Burton should have some fantasy value against the Bengals.

Hayden Hurst continues to get limited practices in with his back injury. He’s been disappointing in fantasy for the most part, but could still be worth a start in some leagues against the Vikings if he plays.

Last week I managed a 3-1 record, moving me up to 11-5 on the season. I did not account for the Raiders playing as well and as disciplined as they did. I have to give it to them, as they looked strong in their win over the Chiefs. But, I will continue to fade wide receivers facing James Bradberry.

I like the Bills and bet on them Tuesday unfortunately. They will recover from that beatdown from the Titans and their offense will be better with John Brown in the fold, but I don’t see the Chiefs putting up back to back duds. This game has playoff ramifications and I expect them to be more than ready.

Joe Burrow and the Bengals were absolutely destroyed by the Ravens last week and there was little good to take from that game. But, we’ve seen enough good things from Burrow this season to believe he can bounce back this week. The Colts defense is what’s winning them games this season, as Philip Rivers has been more of a burden than savior. This should be a low scoring affair that the Colts should win, but as long as Burrow can keep from turnovers, this game should be close.

Will add after they props posted Friday

Terry McLaurin — Under whatever his prop is against Bradberry probably.