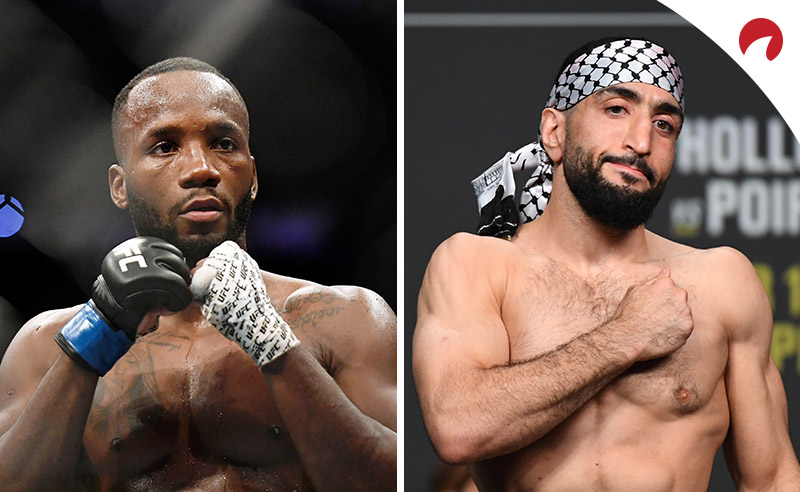 Following a fantastic and exciting UFC 259, the promotion remains at the UFC Apex Center for UFC Fight Night: Edwards vs Muhammad. The two men on the marquee will look to cement themselves in the top five of the welterweight rankings as Leon Edwards puts his eight-fight winning streak on the line, while Belal Muhammad has won his last four.

It appeared that Edwards was on track for a title shot after winning eight fights in a row, with his last loss coming in 2015 against the current welterweight champion, Kamaru Usman. After beating Rafael dos Anjos in July 2019, Edwards hasn’t fought since, holding out for a title shot that didn’t come.

Online sportsbook Bovada has released UFC Fight Night: Edwards vs Muhammad odds, with Edwards listed as the -270 favorite and Muhammad the +210 underdog. This means you would have to wager $270 to profit $100 on an Edwards victory, while a $100 bet on a Muhammad win would profit you $210.

The largest favorite in the UFC Fight Night: Edwards vs Muhammad odds comes in the women’s strawweight bout as Angela Hill is a -375 favorite over Ashley Yoder (+285). The tightest line comes in the heavyweight bout between Ben Rothwell and Philipe Lins with that fight set as a pick‘em and both men at -115 odds.

New to betting on the fights? Check out our How to Bet on the UFC Guide to help you get in the action. Also, be sure to keep an eye on our UFC odds page for the latest up-to-date betting lines.

It has been over five years since Leon “Rocky” Edwards (-270) tasted defeat, a decision loss to welterweight champion Kamaru Usman, and a win here may put him in line for his long-awaited title shot. On the other side, Belal “Remember the Name” Muhammad (+210) has had two strong victories in the duration Edwards has been out and now has a huge opportunity to make a jump in the welterweight rankings.

Ryan “Superman” Spann (+115) looks to return to the win column after his eight-fight winning streak was snapped in his last appearance in September. Meanwhile, this is the first time we are seeing Misha Cirkunov (-145) since his first-round submission win over Jimmy Crute in September 2019.

Two heavyweights will collide looking to return to the win column after recent losses. Philipe “Monstro” Lins (-115) has dropped his two UFC fights after winning the 2018 PFT tournament. As for Ben Rothwell (-115), he had won two in a row before his decision loss to Marcin Tybura last October.

Dan “50K” Ige (-135) had won six fights in a row before his unanimous-decision loss to Calvin Kattar last July and he hopes to return to the win column in this bout. Having already made a rebound after a loss is Gavin “Guv’nor” Tucker (+105), who suffered his first pro defeat in 2017, took nearly two years off and is now on a three-fight winning streak.

Following back-to-back controversial split-decision losses, Angela “Overkill” Hill (-375) looks to return to the win column for the first time in just over a year. Ashley “Spider Monkey” Yoder (+285) was in a similar situation with two losses in a row before she earned a win last November. Hill earned a unanimous-decision victory over Yoder in 2017.

It was not the debut that Manel “StarBoy” Kape (-145) was looking for, losing a decision that snapped his three-fight winning streak. This fight will mark the return of Matheus Nicolau (+115), who was cut from the UFC in 2018 but landed back in the promotion after two victories in 2019.

Two fighters coming off defeats will open up our main card. Darren “The Dentist” Stewart (-190) has been on a win-one, lose-one streak in his last four, most recently losing a split decision to Kevin Holland in September. Eryk “Ya Boi” Anders (+155), meanwhile, had won two in a row before his decision loss last May.