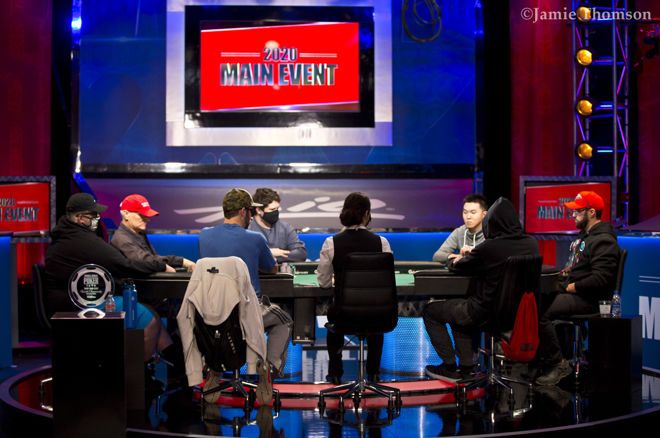 Recently, the final table of the American version of the 2020 World Series of Poker (WSOP) $10,000 Main Event played out at the Rio All-Suite Hotel & Casino in Las Vegas. In this analysis, I use a special tool called ICMizer and show you an alternative strategy to the traditional all-in or fold when you become shallow stacked.

It’s interesting to see how Shawn Stroke’s elimination hand would have become a fold if he managed to min-raise rather than shove his 4-big-blind stack. Would you agree that this is a $50,000 mistake or was there really no other way to play it?

second to act. Take a minute and ask yourself what you would do with these pocket threes in this spot. Would you fold? Limp? Min-Raise? Or go all in?

This is a very abnormal scenario because I think the right play is to min-raise. ICMizer actually shows the profitability of going all in here (see the video below to see it in action). What it suggests is that shoving the pocket threes is barely profitable, due in part because Joseph Hebert, the chip leader in the big blind, is supposed to call with a super wide range.

Instead of being in spots where you’re making barely profitable plays, you should be looking to make very profitable plays. According to ICMizer, if you know players are going to call a bit wide, then shoving the threes becomes a breakeven shove at best.

What if we min-raise? The big blind is still going to call with a wide range, so we’re not really making them play better or worse in this scenario. They’re likely to call either way. However, when we min-raise and all hell breaks loose behind us, we might find opportunities to fold in the hope of laddering up.

Stroke wound up going all in, Harrison Dobin jammed for 4.2 million next to act with the

, and Ron Jenkins called off for 3.3 million from the cutoff. As it happened, the queens held up to give Jenkins the double, Dobin was left short, and Stroke was out in seventh place. To be clear, I don’t fault Stroke for his shove. It’s what most players would do and what I probably would’ve done before I started studying final table strategy.

However, imagine if Stroke had min-raised. Dobin likely would’ve still jammed, Jenkins would’ve called off, and now Stroke would have had the opportunity to fold, giving himself a chance at an extra $50,000. Realistically, on a 4-bb stack, Stroke’s odds of winning the tournament were very slim, so his real value came by trying to ladder up.

A lot of people get it in their heads that there’s not much play when they’re shallow stacked, it’s just all bingo, but it turns out if you care about making money there is a giant edge to be gained by using more than just an all-in or fold strategy.

For a more thorough breakdown of this hand and a look at ICMizer, check out my thoughts in the following video: