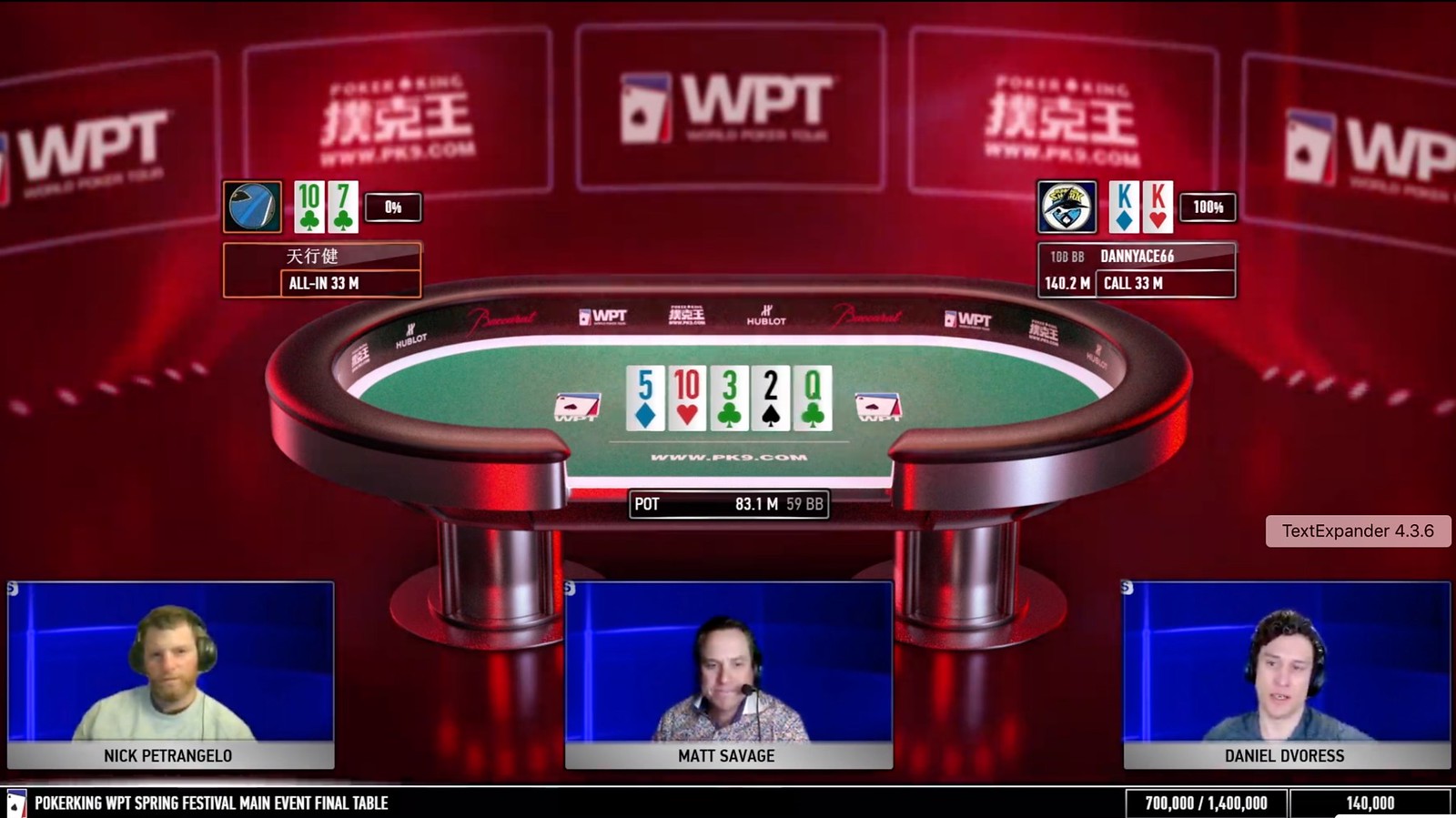 The rapid-fire finale was a testament to the tournament’s mobile-only dynamic and capped off a successful collaboration between the WPT and Asian mobile app Poker King.

In addition to a blistering, final table run from DannyAce66, Phil Ivey, Phil Hellmuth, and a host of famous faces made it into the money.

The ¥2,000 ($309) tournament attracted 3,505 entries across three starting flights. Ivey and a galaxy of stars were initially drafted in as bounties to help raise the tournament’s profile.

It took until Day 2 before the final six bounties collapsed. Poker King ambassador Stephen Chidwick was out before the bubble in 761st place. Scotty Nguyen also missed out on a money finish, exiting in 576th place.

Eventually, 550 players took home at least $618. Jean-Robert Bellande laddered up a few places to win $927 (325th place). The next bounty to fall was Phil Ivey.

Nick Petrangelo was the last of the six bounties standing, and made it to 157th place to win $1,390. Everyone who took out a star player was gifted $15, while the bounties all donated their prize money to charity.

With Ivey et al. sent to the rail, it was time for DannyAce66 to start his winning run. 43 players returned for Day 3 on Feb. 21.

Online player samurs561 was leading at this point, but would fall before the close of play. As 43 became nine, DannyAce66 climbed to third in the overall standings at the end of Day 3.

The finale got underway on Feb. 22 and few watching the live broadcast thought it would be over so quickly.

Playing on a mobile device does add a sense of urgency to the proceedings at the best of times, but when there’s a WPT title on the line, a little less haste is more than acceptable.

DannyAce66 didn’t see it that way. He broke the deadlock by taking out Yuchuan (Chinese for “fishing boat”) in eighth place, and never looked back. 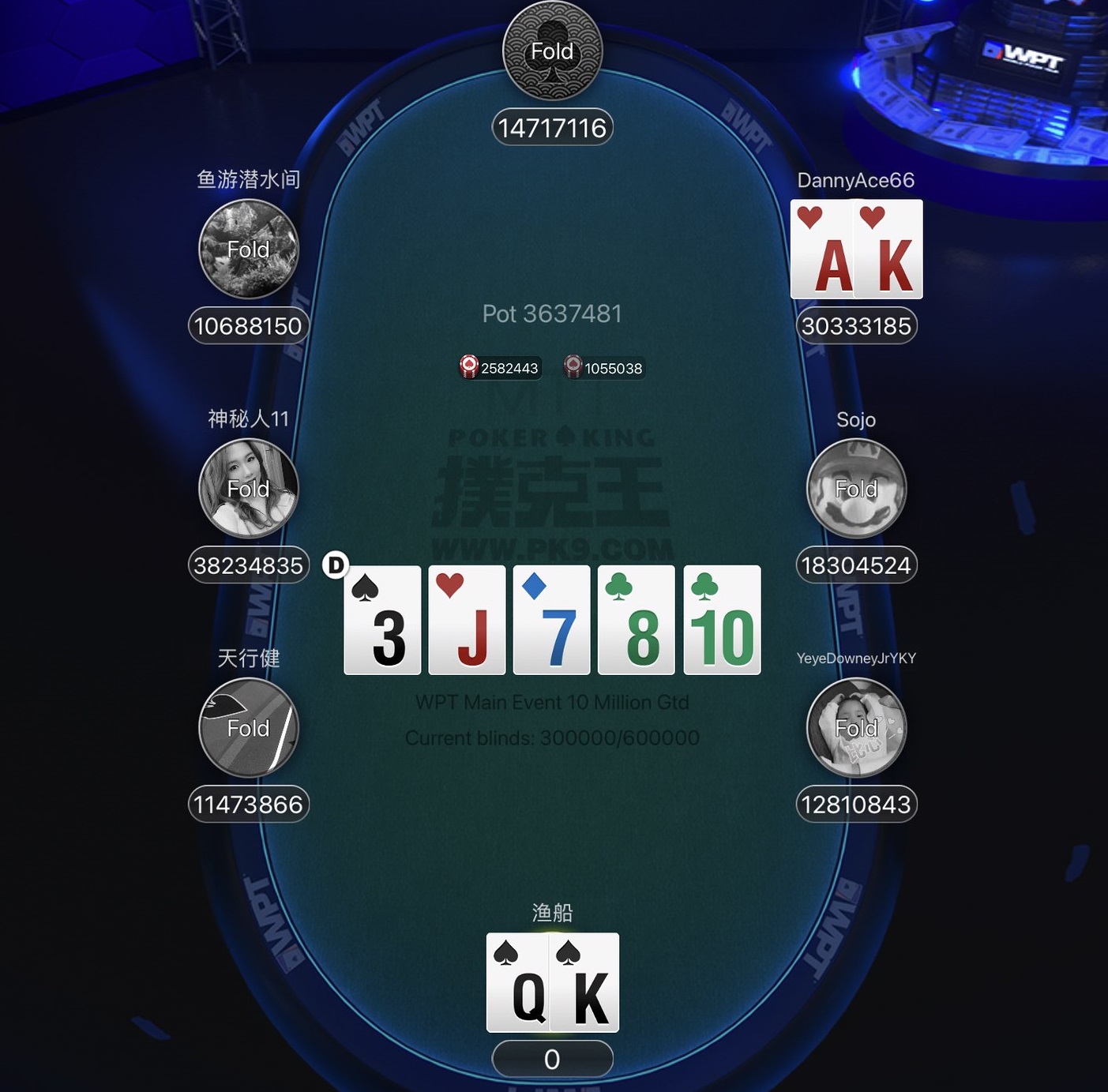 Tianxingjian joined in the cull and, between the two, they eliminated everyone at the final table. DannyAce66 got the best of it though and started the heads-up battle with a 3:1 chip lead.

Tianxingjian reduced the deficit after one hand, but was out a few minutes later.

In the final hand, DannyAce66 raised in position pre-flop with K♥ K♦. Tianxingjian called from the big blind with 10♣ 7♣ and, eventually, went all the way.

With the board showing 10♥ 5♦ 3♣ 2♠, Tianxingjian moved all-in and DannyAce66 called. The Q♣ on the river didn’t change anything and, with that, DannyAce66 became the first WPT Spring Festival champion.

The WPT and Poker King set out to achieve something unique with the Spring Festival Main Event. The tournament marked their first international collaboration and offered benefits on both sides.

That’s a win for both sides. Even though the $1.5 million guarantee wasn’t met (it was just under $500,000 short), attracting more than 3,500 players is an achievement in itself.

Poker King has only been around since 2018 and was virtually unknown in the West until last year. Now, however, it’s hosted a WPT event with a field that any established poker room would be proud of.