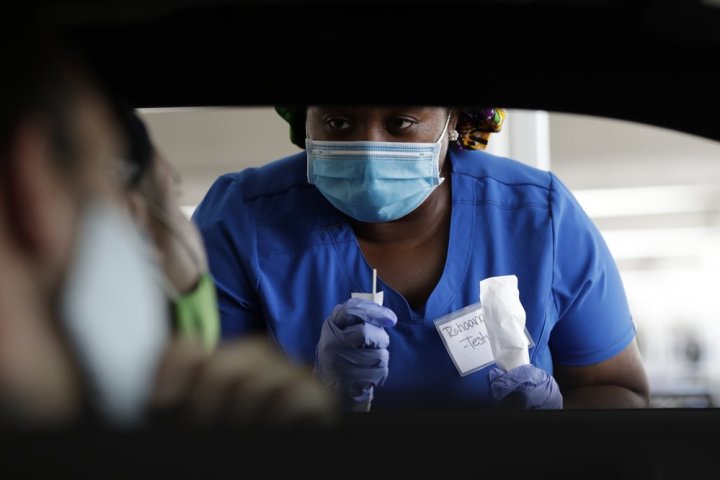 When a Brandon, Man., woman and her son tested positive for the novel coronavirus she was surprised, she says, because she’d been limiting her exposure outside the home during the pandemic.

Rebecca, whose last name isn’t being used to protect her family’s privacy, told 680 CJOB she’d followed all of the public health measures but still picked up the disease.

“I’m the only one who had left the house. My husband was recovering from surgery, and my two kids were home, and we were specifically doing that to try our best not to get it,” she said.

“The only places I had been were work — and nobody at my work had it — and I had been at the grocery store three times and gone for gas once. Somewhere there, I must have picked it up. Every time I went I would wear a mask, I would sanitize my hands where the station was.

“I was being very careful, but doesn’t matter. I got it anyway.”

Read more:
Advocates ask for empathy as Winnipeg’s first COVID-19 case in a school is identified

Rebecca described her symptoms as starting off with a sore throat and congestion — something she didn’t think anything of — and it gradually got worse.

“I was tired, and I’m still kind of residually tired.

Rebecca said her family made the decision to isolate together as it wouldn’t be possible for only two of them to remain isolated. Her husband and youngest son, however, made it through the ordeal without contracting the virus.

Part of the reason she wants to remain anonymous, she said, is out of fear for the way others might react to her children if they find out they’re from a COVID-19-positive home.

“We didn’t know anybody who had it, and Brandon as a general population didn’t have many cases then, so we worried if word gets around that our family has it, are people going to avoid us?

“I’ve got one son who’s in high school, and I’ve got another son who’s in elementary. I feel that maybe the children in those communities would be more accepting of it,” she said.

“…but it those kids come home and say, ‘hey, I met this kid and he had COVID,’ I’m afraid that parent is going to call the school.”

Health officials are encouraging Manitobans to be empathetic about others who have been diagnosed with the coronavirus, especially in light of a case of a Winnipeg high school student that some advocates have suggested could face social stigma after testing positive recently.

“Treat others the way you want to be treated,” said Dr. Brent Roussin, Manitoba’s chief public health officer, stressing the importance of not stigmatizing individuals with the virus.

“This is a scary issue that is kind of looming over all of us.”

Rebecca said she feels there’s still a lack of understanding about COVID-19 and its effects, especially how they can differ from individual to individual.