Last week, Chance Kornuth was at the end of a pretty disastrous starting period in the Galfond Challenge on Run It Once. Losing €280,000 overall, the Chip Leader Coaching owner was looking at a long climb back up the mountain to even be able to talk about breaking even. 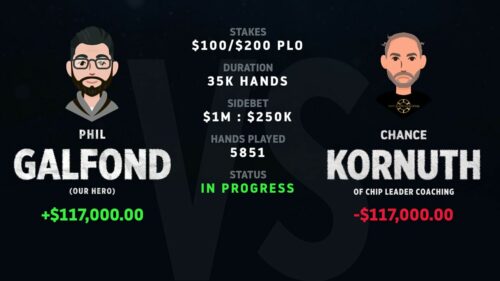 Just a couple of days back at the felt, Kornuth has wiped out over half the arrears he was in, and sat at just €117,000 in the red, will attack the next portion of the contest with renewed vigour.

The chart of Chance Kornuth’s route to being €117,000 down to Galfond at the present moment can be tracked back via this handy page on the Galfond Challenge official website, and as you can see, Kornuth has hardly been in profit since the match kicked off.

That may or may not be about to change, of course, but Kornuth has recovered where many in this spot would struggle to.

After 5,851 hands of the 35,000 hands agreed on, Kornuth may be stuck six figures, but two days of recovery yielded a positive result of around €163,000 for the WSOP bracelet winner.

When the session ended on Twitch with plenty watching along, Kornuth had wiped out over a quarter of the red he was mired in before the session started.

On Day 11, Chance Kornuth had exactly the opposite in terms of starts, racing into a lead of around €34,000 on just one of the tables. That was erased in one hand, however, when Galfond made a king-high flush for a pot worth over €41,500 alone.

Kornuth, however, would not be denied a second day in the black and after grinding back to parity, moved into a big lead of around €50,000 after a big hand where he had the best of it and held on through turn and river with Galfond a massive draw.

Kornuth went smallball, keeping it tight for a few hands, and maintaining his lead, and while Galfond did win one big hand with a flush, it was mostly in favour of Kornuth that the big pots went.

After a second session in a row with a big profit, Kornuth was back to a more manageable deficit. With the biggest chunk of the hands to go, the Chip Leader Coaching owner will feel confident that he can keep the run going and push the match towards the kind of close-run battle that Galfond won against VeniVidi, when it was all on the final few hands. If we get that kind of drama again, it could be higely profitable for Kornuth, as any kid of win for him and Galfond will owe him a million dollars with only $250,000 on the line from Kornuth.

There really is everything to play for, and still 29,149 hands to play it in. The Galfond Challenge is still just getting started and with an online audience around the 3,000 mark for each session, thousands of poker fans are invested in the direction the titanic tussle will take.