Arsenal are enjoying a six-game unbeaten league run at the Emirates (W3 D3) scoring 11 and conceding just four in the process, with three clean sheets thrown in, but hosting the runaway Premier League leaders is their toughest test.

Mikel Arteta went with a full-strength side in their 1-1 draw with Benfica on Thursday, naming the same starting XI that also beat Leeds last weekend. Energy levels may determine any changes but Kieran Tierney should be one as he should return after injury.

Pierre-Emerick Aubameyang missed a sitter in the Europa League but he’s been leading the line well for the Gunners with five goals in his last two league starts, and he did score both goals in Arsenal’s FA Cup semi-final win over City last season.

Those are his only two goals in eight games against City though.

City have title in the bag

City’s midweek win at Everton was their 12th in a row in the league and 17th overall in a storming run that has put them in total control of a title race that sees them 1/80 to finish top of the pile in May.

With the league under control Pep Guardiola may even make a few changes with an eye on the Champions League next week and with the hold they enjoy over Arsenal in recent times. They’ve won their last seven league meetings and are unbeaten in 10 league tussles.

The red-hot Ilkay Gundogan, who has 11 goals in 12 Premier League games, should be available after missing the Everton win, but even if he isn’t then the return of Kevin De Bruyne is an ominous site for those facing this Man City juggernaut.

Their run has been powerful and stress-free, with in fact only Cheltenham Town even taking the lead against City in any game since November. 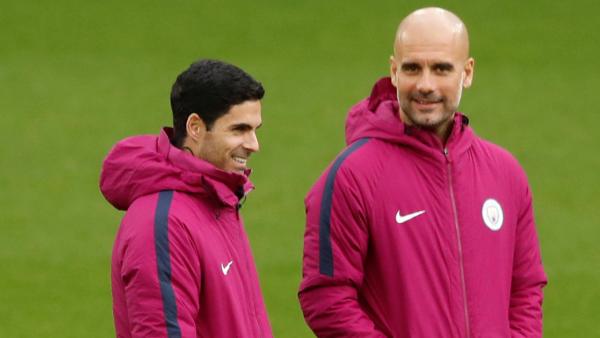 Arsenal have a poor record to say the least against City, winning just three of their last 18 league games, losing their last seven straight and failing to score in their last three at home, where it’s been one-way traffic in favour of City.

City have scored 15 goals in their last five visits in all competitions and conceded just once. Arteta has shown that he can find a formula to beat City before in the FA Cup, but it’s a huge ask to do that when they’re in this type of imperious form.

Not so long ago this game would have goals written all over it, and in fact only three of the last 16 meetings have seen under 2.5 goals scored in the game – but crucially two of those have come in the last three meetings. Under 2.5 goals here is 2.01/1.

Seven of the last nine have also seen just one team score in the contest, with it being Arsenal to have drawn a blank on six of those occasions, and it’s 2.01/1 on just one team finding the net again.

Man City have six ‘win to nil’ results during that span and their improved defensive solidity means that could very well be on the cards again at 2.77/4.

Arsenal have scored just 16 goals at home in the league this season, that’s just one more than Newcastle, while Man City have conceded just eight on the road and allowed more than a single goal just once, at Spurs in November.

Given that Arsenal will have so little possession, it’s a tough ask to keep City out for the full 90-plus minutes. My guess is they’ll keep it close, but City will again prove too good.