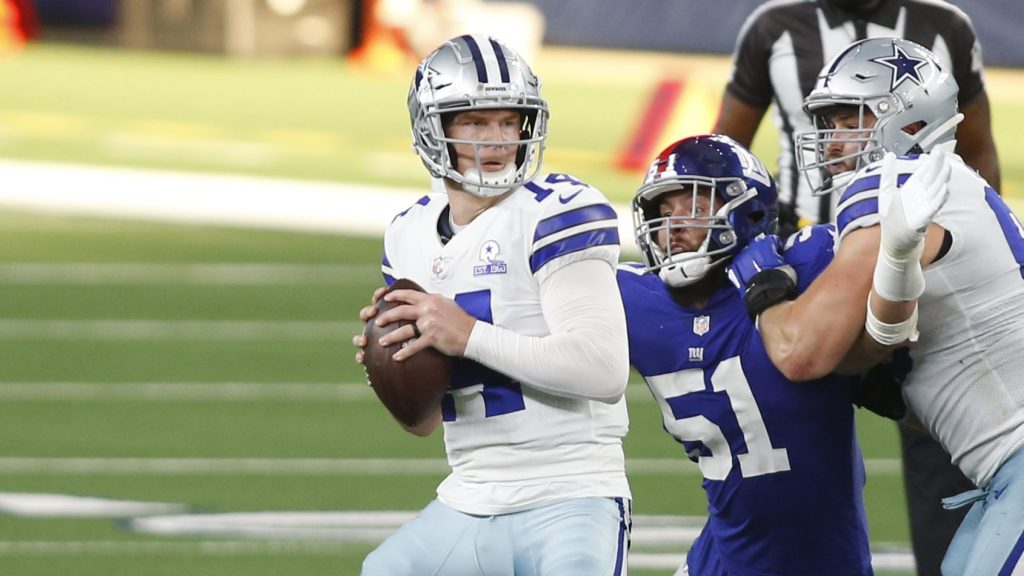 The Arizona Cardinals (3-2) and Dallas Cowboys (2-3) hook up for a Monday Night Football game at 8:15 p.m. ET at AT&T Stadium in Week 6. Below, we preview the Cardinals-Cowboys Week 6 betting odds and lines and make our NFL picks and best bets.

Bet $1 on either the Arizona Cardinals or Dallas Cowboys money line, WIN $100 (in free bets) if either team scores a touchdown during their Week 6 matchup. Place your legal, online sports wagers in CO, IN, NJ and WV at BetMGM, The King of Sportsbooks.

QB Andy Dalton takes the reins of the Dallas offense with QB Dak Prescott out after suffering a season-ending injury (right ankle compound fracture) in Week 5.
The Cardinals are 3-2 ATS. The Cowboys are 0-5.
The Cardinals are 0-5 O/U, averaging 25.6 points per game for and 20.4 PPG against (5th-best in NFL).
The Cowboys are 4-1 O/U, scoring 32.6 PPG (3rd) and yielding a league-worst 36.0 PPG.
The Cardinals snapped a two-game skid with a 30-10 victory at the winless New York Jets in Week 5. QB Kyler Murray threw for 380 yards with a TD and a pick, and he ran for 31 yards and a score. WR DeAndre Hopkins had six receptions for 131 yards and a TD.
The Cowboys kicked a field goal as time expired to beat the visiting New York Giants 37-34 last Sunday. After Prescott’s injury, Dalton (9 of 11, 111 yards) steered an 11-play, game-tying drive (field goal) with 1:56 remaining. After Dallas’ defense forced New York to punt 56 seconds later, Dalton put the Cowboys in position for the game-winning field goal (34 yards). WR Michael Gallup (4 catches, 73 yards) made two exceptional sideline catches during the final drive. RB Ezekiel Elliott finished with 91 yards and two TDs on 19 carries.
Dallas won the last head-to-head meeting 28-17 at Arizona on Sept. 25, 2017. It was the Cowboys’ first win vs. the Cardinals in five tries, dating back to 2008.

The COWBOYS (+100) are the play. Dalton deserves more respect than he gets and will fill in just fine as Prescott’s replacement. His past struggles can be attributed to a bad Cincinnati Bengals offensive line that couldn’t protect him.

While the Cardinals beat the winless Jets last week, they still lost to a bad Detroit Lions team in Week 3. Murray should have a field day against Dallas’ awful defense, but the COWBOYS (+100) win in a shootout.

The Cowboys +1 (-110) are a decent play, but since I’m banking on a straight-up Dallas win and backing the ML, I’m going to PASS. If you prefer to take the points and pass on the Dallas ML, go for it. I wouldn’t blame ya.

The OVER 54.5 (-115) is the STRONGEST PLAY – 1.5 times your usual bet. As mentioned, the Cowboys defense ranks last in points allowed. The Cardinals’ 20.4 PPG looks better than it actually is. Two of their wins came against the NFL’s lowest-scoring team in the Jets (30-10) and the 29th-worst scoring Washington Football Team (30-15).