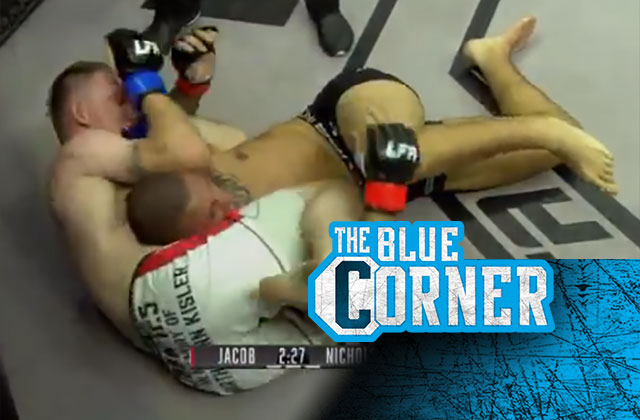 By Nolan King, The Blue Corner |

AJ Nichols turned back the clock Friday at LFA 101.

OK, so it wasn’t full blown Gary Goodridge-crucifix-knockout-against-Paul-Herrera-at-UFC-8 level. But when Nichols (7-2-1) grabbed opponent Miguel Jacob from a reverse crucifix position and landed ground-and-pound, a little bit of nostalgia came with it. The stoppage was at 2:41 of Round 3.

Nichols, 30, not only added another highlight to his reel, he extended his winning streak to three. The win over Jacob (4-1) was the first TKO victory of Nichols’ career.

This seems like a good time to pay tribute to Goodridge’s sweet violence, which took place in his UFC debut in February 1996. In just 13 seconds, Goodridge sprawled, reversed, flipped, and knocked Herrera unconscious – all while wearing his gi. What a badass and a truly underappreciated OG of the UFC.

The Blue Corner is MMA Junkie’s blog space. We don’t take it overly serious, and neither should you. If you come complaining to us that something you read here is not hard-hitting news, expect to have the previous sentence repeated in ALL CAPS.