The widow of 5Dimes founder Sean Creighton, known in the gambling community as 5Dimes Tony, has confirmed that the sportsbook is planning to enter the regulated US sports betting space after it announced earlier this month that it was quitting the US.

5Dimes was founded by Creighton more than two decades ago. The online sports betting and casino operator is one of the biggest offshore businesses to have been targeting US players and has built a massive player base in that lucrative market.

Last week, 5Dimes published a notice on its website, saying that it would stop taking bets from US customers from 12 am ET on September 21. Bettors were urged to request their balances by 12 am ET on September 25. Any customer funds that remain unrequested after that date would be “transferred to a third-party claims administrator who will seek to deliver the funds to the account holder”, the message read further.

That earlier message also suggested that the online sportsbook would explore opportunities to enter regulated US territories in the future.

On Tuesday, another message was published, that one from 5Dimes Tony’s widow, Laura Varela, in which she confirmed that they were indeed planning to get into the regulated US sports wagering mix.

Varela assumed control of 5Dimes in the fall of 2018 after her late husband went missing. 5Dimes Tony’s body was discovered by police in Costa Rica in 2019.

Making Sure Brand Is Well Represented

In her message, Varela said that many existing 5Dimes customers have asked about the future of the sportsbook now as it is closing its doors to US bettors and that while she could disclose limited information at this point, “there are definitely some positive surprises in store.”

The widow of the sportsbook’s founder went on to say that she is currently working with experts and consultants to “make sure that the brand that you have come to love is well represented in the regulated US market.” You can read Varela’s full message below. 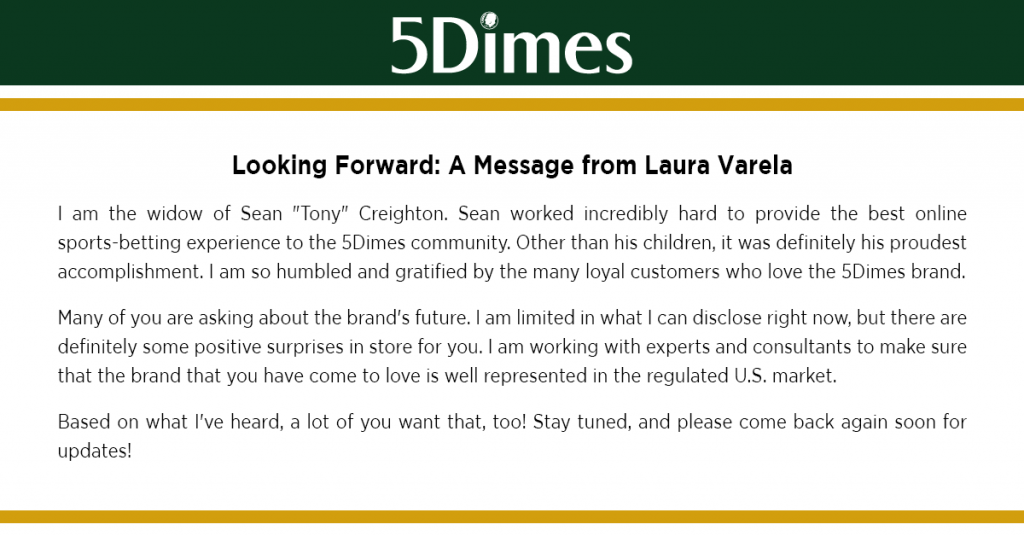 5Dimes’ plan to go down the regulated path brings to light a lot of questions about how exactly it would do that, given its ongoing issues with the US Department of Justice. According to industry experts, the sports betting operator might have reached or is working toward a settlement with DoJ.

The settlement, when and if reached, might be followed by a sale of assets, that is to say the brand and the large US database – to a third party. Online poker room PokerStars, now owned by Irish gambling powerhouse Flutter Entertainment, went through a similar transition from the black market to the regulated space some years ago.

Global Market Advisors consultant Brendan Bussman said last week that 5Dimes’ sail toward the regulated US betting market might not be that smooth. He noted that for operators that have provided illegal gambling services in the US, “some regulators have a long memory and it may take some time before they will even be able to be licensed or operate.”

It is to be seen how things will unfold and according to the latest message from 5Dimes, news on that will emerge soon.