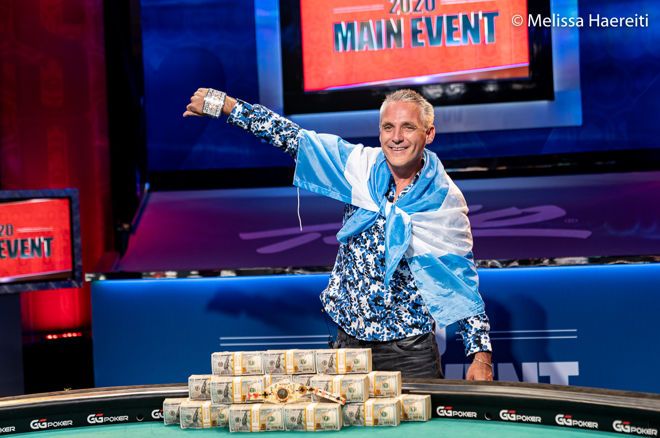 Damian Salas is gunning for the title of Super MILLION$ champion only a couple of months after becoming the 2020 WSOP Main Event champion. Salas enters the 36th Super MILLION$ final table second in chips and with a very realistic chance of getting his hands on the $408,406 top prize.

Salas doesn’t have the best Super MILLION$ record having only cashed in two of his previous 11 attempts. Those tournaments ended in a 15th and 20th place finish for combined prizes of $61,708. Even if the unthinkable happens and Salas finishes in eighth-place, he’ll more than double his Super MILLION$ winnings.

Eight talented players stand between Salas and his goal, meaning the Argentinian will have to be at the very top of his game to come away with the victory.

Bert Stevens, better known as “girafganger7” to some of you, is the man leading the finalists into battle at 6:00 p.m. GMT on February 16. Stevens won this tournament back in September 2020 and padded his bankroll with almost $395,000. He sits down with more than 90 big blinds and some will say it is his tournament to lose from this envious position.

Darren Elias is another former Super MILLION$ champion at the final table. In fact, Elias has two outright victories in GGPoker’s biggest weekly tournament. Elias took down this event in June 2020 and won $393,262. He then won the first Super MILLION$ of 2021 and scooped another $448,842. Thirteen of Elias’ fellow GGPoker players are set for a windfall because they bought 8.2% of Elias at 1.17 markup before the tournament started on February 14.

Fourth place at the restart belongs to Aleksei Barkov who has navigated his way to what is a third Super MILLION$ final table appearance. The last time Barkov was here was the final event before Christmas 2020 and he finished in second for a $300,962 prize. The Russian, who has $3.82 million in GGPoker winnings, will be hoping to go one place deeper this time around.

Super MILLION$ regular and former champion Guillaume Nolet returns to the action with enough chips to place him fifth when the final table commences. Nolet has played in all but five of the Super MILLION$ run to date. Ten of those tournaments have seen Nolet finish in the money, with four of those being final table appearances. His victory came in October 2020 and saw him carry off a $502,688 haul.

Cyprus’ “dimiasg” won their seat to this tournament via a $1,000 satellite and is now guaranteed more than $51,000 which is some return on investment. This is the first time the Cypriot has played in this event and they’re now guaranteed their first cash and first final table appearance. Can they round off a perfect event and grab their first victory, too?

Arsenii Malinov is the second Russia star to progress to this week’s Super MILLION$ final table. He’s been here twice before, with those runs ending in fourth and eighth-place finishes. Malinov recently broke through the $1 million barrier for GGPoker winnings. Taking down this evening’s event would see him power through the $1.5 million mark.

The return to form for Sami Kelopuro has been nothing short of spectacular. He recently won three Sunday majors in a single night at GGPoker and is now gunning for glory in this event. The Finn returns eighth in chips so is at the wrong end of the chip counts, but he still has almost 29 big blinds at his disposal which is a playable stack. Kelopuro has never finished higher than seventh in this tournament, will that fact change on February 16?

Adrian Mateos is the man bringing up the rear in ninth place, although with 21 big blinds in his stack. Mateos was the youngest player to win three WSOP bracelet but he’s never won the Super MILLION$ despite trying 36 times. He’s come close on three previous occasions, finishing sixth twice and fourth once. He needs a little help if he’s to triumph in this event, but everyone knows Mateos is capable of walking away from this event as its champion.