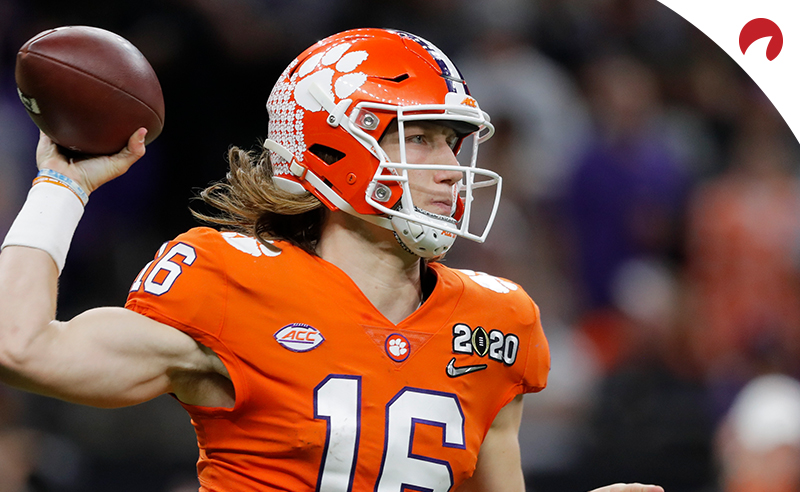 Well, it appeared as though the College Football Playoff may have been in jeopardy this season during the COVID-19 pandemic and conferences such as the Pac-12 and Big Ten declined to move ahead with their fall sports programs – though the Big Ten may return.

However, we have now had two weeks of college football, albeit with a lighter schedule than we are used to, and CFP executive director Bill Hancock says the CFP will continue as scheduled, with the national championship game taking place Monday, January 11, at Hard Rock Stadium in Miami.

With the season underway, online sportsbook BetOnline has released odds for which team will win the 2021 national championship and has listed Clemson as the +150 favorite. The Tigers are followed by Alabama at +225, Georgia at +450, Oklahoma at +750 and Florida at +1200 to round out the top five on the oddsboard.

At this time, there are no Big Ten or Pac-12 teams listed on the oddsboard.

Odds as of September 15 at BetOnline

New to the college football scene? Check out our handy college football betting guide to help you get in the action. Also, keep an eye on our College Football Odds page for the latest up-to-date betting lines.

Why Is Clemson The Early Favorite?

Head coach Dabo Swinney has put together quite the program recently, making the College Football Playoff in each of the last five seasons, advancing to the national championship game four times and winning two titles. Clemson has the No. 1 recruiting class in 2020-21 with six five-star recruits, including the top-ranked recruit, defensive tackle Bryan Bresee. The defensive line is an area where the Tigers have been particularly dominant over this stretch.

Not only do the Tigers have a great new crop of young players to start the next wave, but they also bring back junior QB Trevor Lawrence, the projected first overall pick in the 2021 NFL Draft and the favorite to win the Heisman Trophy. All Lawrence has done as a starting QB is go 26-1 and appear in two national championship games, winning one.

Furthermore, in a surprising move, junior running back Travis Etienne decided to return for another year. He had the seventh-most rushing yards and eighth-most rushing TDs in the country in 2019-20.

After getting off to a good start in Week 2 with a 37-13 win over Wake Forest, the sky is the limit for Clemson.

What Teams Are Providing Better Value Than Clemson?

There are some notable teams missing from the oddsboard, specifically from the Big Ten in the Ohio State Buckeyes, who were second on the list at +350 prior to the decision of the conference to postpone play. If the Big Ten decides to pick up play perhaps in mid-October, OSU may be worth a wager, despite having less time and fewer games to prepare for a playoff appearance.

Similar to Clemson, Ohio State was returning its starting QB, Justin Fields, who was a 2019 Heisman Trophy nominee and finished the season with an impressive 41-3 touchdown-to-interception ratio.

Additionally, the Buckeyes had the fourth-best recruiting class for the 2020-21 season, including bringing in the top-ranked wide receiver in Julian Fleming and the top-ranked offensive lineman, Paris Johnson Jr. Fields would have weapons all around him and this OSU team should be one to watch if they hit the field.

Another team that deserves a little love is the Florida Gators at +1200. The squad finished second in the SEC East last year with a 6-2 record, behind only Georgia, and its only losses were to LSU and Georgia.

QB Kyle Trask took over the team in its fourth game and performed quite well after Feleipe Franks suffered a season-ending injury. The Gators have a very favorable schedule; they have tough tests against Georgia and LSU but that’s about it. They return many of their starters from 2019 and could be sneaky good in the SEC.

What About The Reigning Champs?

Some people may be looking at LSU for a wager on the heels of a tremendous 2019-20 campaign that led to a national title. I would be a little hesitant, though, as starting QB Joe Burrow, the 2019 Heisman Trophy winner and first overall pick in the 2020 NFL draft, is gone and it is Myles Brennan leading the charge.

The Tigers still have a very strong running game with former five-star recruit John Emery Jr. leading the way, but in an always tough SEC with an unproven QB, it’s hard to lay a wager on them at +1600 at this point.

What is a Futures Bet for NCAA Football Teams?

When it comes to big events for any sport, you can bet months in advance. In this case, a futures bet is a wager made on which team will win the national championship. Each week, oddsmakers will update the odds to reflect how a squad is doing. If a team is plagued with injuries, their chances of making it to the NCAA football final game slim down. A surging squad will see their odds skyrocket.

When you go to a college football sportsbook, you’ll see the betting lines laid out like this:

Unlike a traditional straight-up bet where there’s a clear favorite marked by the minus sign (-), ‘Bama is the fave since they have the lowest odds. The rest are considered underdogs.

If you believe that LSU has the greatest odds of winning the championship, and you bet $50 on them, you’d get a payout of $275 – your original $50 is returned along with your winnings of $225. On the other hand, if you’re looking at Georgia and think they’re going to turn it around and win it all, that same $50 would give you $750 – you get your $50 back, plus your prize of $700. Our odds calculating tool will show you how much you’d win based on the odds and amount bet.

When you see futures odds that you like, it’s best to jump on them early. As mentioned above, betting sites will adjust the odds as we get closer to bowl season and teams move up and down in the standings.